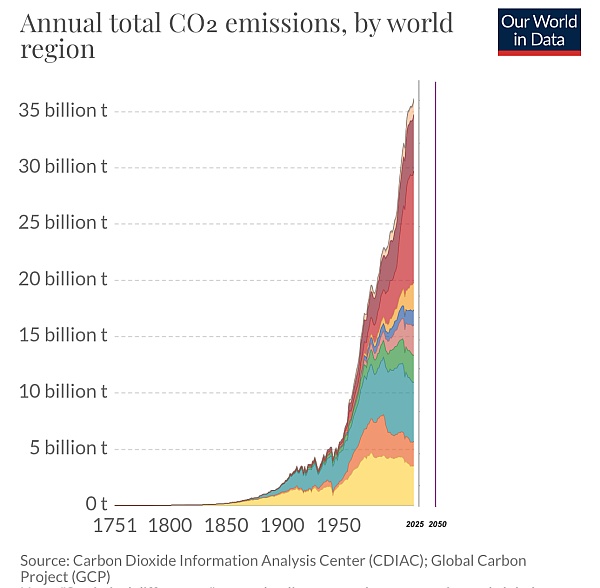 graph by Our World in Data

The latest IPCC report says that in order to prevent catastrophic climate change global net CO2 emissions will have to reach net zero by 2050, from their current levels of 33-38B tons rising by nearly 2%/year. The IPCC’s past reports have been almost laughably conservative and optimistic, which is just one of the reasons Extinction Rebellion have set a net-zero deadline of 2025, just 6 years from now.

It should be noted that total greenhouse gases will continue to rise for at least another 15-20 years after net zero CO2 is achieved, due to the ongoing run-on effects of other greenhouse gases, notably methane, that have been unleashed ‘naturally’ as a result of the damage we have already done to the atmosphere. And it is at best a long shot that even if we were to achieve net zero CO2 by 2025, it isn’t already too late to prevent climate collapse. Our knowledge of the science remains abysmal and every new report paints a bleaker picture. Expect a fierce anti-science, anti-reality backlash as more and more climate scientists concur that runaway, civilization-ending climate change is inevitable no matter what we do, or don’t do.

So what would be required to reduce the course of the hockey-stick trajectory shown in the chart above and achieve net zero CO2 in just 6 years, for a population that will at current rates be 7% (at least 1/2 billion people) greater than it is now?

I think the reason that, while parliaments and political parties and scientists will readily accept XR’s first demand of proclaiming a climate emergency “and communicating the urgency for change”, for most the second demand of achieving net zero greenhouse gas emissions and biodiversity loss to zero by 2025 is simply absurd. Western economies have merely shifted production to Asia; their accelerating consumption of CO2-produced goods continues unabated. Our global economy depends utterly on cheap hydrocarbon energy. It’s completely preposterous to think a short-term shift is even vaguely possible. Renewables won’t help us; as the chart below shows, new solar energy isn’t even keeping up with the annual increases in demand, let alone cutting into the still-accelerating need for hydrocarbon energy: 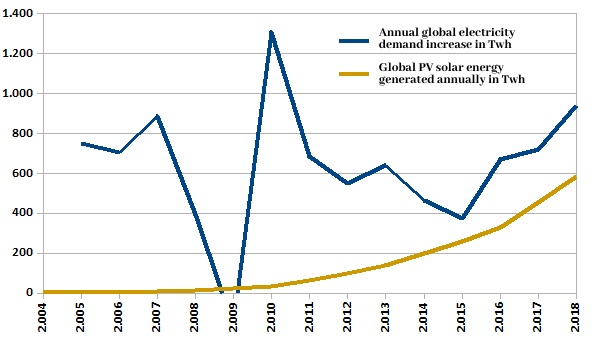 The message of all this is that we cannot save our globalized civilization from the imminent end of stable climate, affordable energy, and the industrial economy — all of which are interdependent. No one (and no group) has the power to shift these massive global systems to a radically new trajectory, without which (and perhaps even with which) our world and its human civilization are soon going to look very different.

No one knows how and how quickly this will all play out, and the scenarios under which collapse will occur vary from humane, collaborative and relatively free from suffering, to the very dystopian. There is therefore no point dwelling on them, or even trying to plan for them. As always, we will continue to do our best, each of us, with the situation that presents itself each day, and our love for our planet and its wondrous diversity will play into that. Our best will not be enough, but we will do it anyway.

We have 1668 guests and no members online