What are Goji Berries? 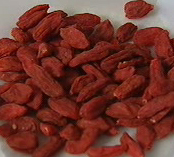 Goji berries are orangey red edible berries resembling grape tomatoes or crab apples but with the consistency of cranberries. They grow in China and Tibet on low-lying deciduous plants, which produce small berries (1 to 2 cm) in the summer.

The majority of commercially-harvested goji berries come from China,and are dried to sell as a health food and for use in Chinese medicine. Depending on the brand, goji berries are sold at health food stores in Canada from: $10.99 for a 100-gram bag to $19.99 for 500 grams (dried berries).

Goji berries taste like a mix between cherries and raisins, just slightly drier and more bitter. People add the dried berries to cereal and trail mix, and they are also used in soups, teas and wine.

Goji berries have been used in traditional Chinese medicine for almost 2,000 years. Also referred to as wolfberries, goji (pronounced go-gee) is the common anglicized pronunciation and name for the Chinese word for the berry. The latin name is Lycium barbarum.

What are goji berries?

Goji berries grow on an evergreen shrub found in temperate and subtropical regions in China, Mongolia and in the Himalayas in Tibet. They are in the nightshade (Solonaceae) family.

Goji berries are usually found dried. They are shriveled red berries that look like red raisins.

Why do people use goji berries?

Goji berries have been used for 6,000 years by herbalists in China, Tibet and India to:

Goji berries are rich in antioxidants, particularly carotenoids such as beta-carotene and zeaxanthin. One of zeaxanthin's key roles is to protect the retina of the eye by absorbing blue light and acting as an antioxidant. In fact, increased intake of foods containing zeathanthin may decrease the risk of developing age-related macular degeneration(AMD), the leading cause of vision loss and blindness in people over the age of 65.

What research has been done on goji berries?

Goji has only been tested on humans in two published studies. A Chinese study published in the Chinese Journal of Oncology in 1994 found that 79 people with cancer responded better to treatment when goji was added to their regimen.

There have been several test tube studies that show that goji berry contains antioxidants and that goji extracts may prevent the growth of cancer cells, reduce blood glucose, and lower cholesterol levels.However, that doesn't necessary mean that goji will have the same benefits when taken as a juice or tea.

Although goji berries like the ones used in traditional Chinese medicine aren't very expensive, goji juice is very pricey. Considering that a 32-ounce bottle of goji juice (about an 18-day supply) can run as high as $50 USD, the evidence isn't compelling enough at this time to justify the cost of goji juice.

Also, we don't know the side effects of regular goji consumption, or whether it will interfere with treatments or medications.

Goji berries have a mild tangy taste that is slightly sweet and sour. They have a similar shape and chewy texture as raisins.

In traditional Chinese medicine, goji berries are eaten raw, brewed into a tea, added to Chinese soups, or made into liquid extracts.

Goji berries may interact with anticoagulant drugs (commonly called"blood-thinners"), such as warfarin (Coumadin®). There was one case report published in the journal Annals of Pharmacotherapy of a 61-year old woman who had an increased risk of bleeding, indicated by an elevated international normalized ratio (INR). She had been drinking 3-4 cups daily of goji berry tea. Her blood work returned to normal after discontinuing the goji berry tea.

Where to find goji berries

Goji juice can be found in some health food stores, online stores, and through network marketers.