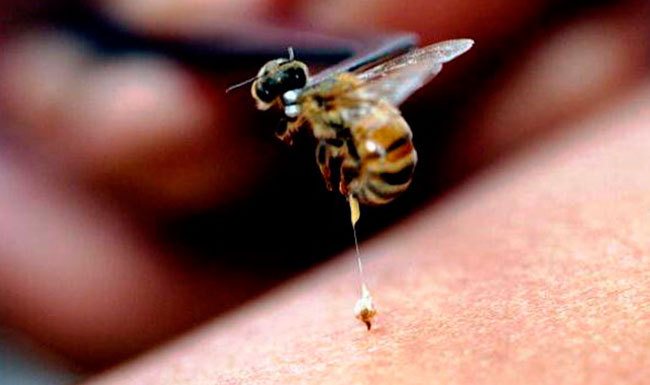 “If the bee disappeared off the surface of the globe, man would have only four years to live. No more bees, no more pollination, no more men!” — Albert Einstein

Ever wondered why bees are so important to our survival? One of the thousands of reasons is the fact that they help to cure AIDS.

Scientists from Washington University School of Medicine in St. Louis, have found that by poking holes in the protective envelope surrounding HIV and other viruses, melittin – a toxin found in bee venom – kills the human immunodeficiency virus (HIV) while leaving the body unharmed. This breakthrough could lead to drugs that are immune to HIV resistance; development of an anti-HIV vaginal gel that may prevent the spread of HIV; as well as possible treatments for existing HIV infections (In 2015, nearly 40 million people were living with the lethal virus globally).

“Melittin on the nanoparticles fuses with the viral envelope. The melittin forms little pore-like attack complexes and ruptures the envelope; stripping it off the virus… We are attacking an inherent physical property of HIV. Theoretically, there isn’t any way for the virus to adapt to that. The virus has to have a protective coat, a double-layered membrane that covers the virus.”

Hood says, as this thrilling anti-viral therapy attacks an essential part of the virus’ structure, it has the potential to prevent the HIV infection, to stop initial infection, as well as to cure existing infections, especially those that are drug-resistant.

“Our hope is that in places where HIV is running rampant, people could use the vaginal gel as a preventive measure to stop the initial infection… We are attacking an inherent physical property of HIV. Theoretically, there isn’t any way for the virus to adapt to that. The virus has to have a protective coat, a double-layered membrane that covers the virus.

“The basic particle that we are using in these experiments was developed many years ago as an artificial blood product. It didn’t work very well for delivering oxygen, but it circulates safely in the body and gives us a nice platform that we can adapt to fight different kinds of infections.”

Could the bee venom-based anti-viral therapy be a game-changer for stopping the spread of AIDS, especially for couples in which one partner is infected with HIV and the other is not? Hood noted:

“We also are looking at this [therapy] for couples where only one of the partners has HIV, and they want to have a baby. These particles by themselves are actually very safe for sperm, for the same reason they are safe for vaginal cells.”

The study, published in the journal Antiviral Therapy, came after researchers from Johns Hopkins Children’s Center, the University of Mississippi Medical Center and the University Of Massachusetts Medical School reported that a Mississippi baby with HIV had apparently been cured, only after he received antiretroviral therapy within 30 hours of birth.

Recently, researchers at Philadelphia’s Temple University employed CRISPR/Cas9 gene editing technology (first developed in 2012) to remove HIV-1 DNA out of the human genome; and when they reintroduced HIV to the edited genomes, the cells were no longer infected with the lethal virus. The study authors observed:

“These observations suggest that a cure strategy for HIV-1 infection should include methods that directly eliminate the pro-viral genome from the majority of HIV-1-positive cells, including CD4+ T-cells, and protect cells from future infection, with little or no harm to the host. The results point toward this approach as a promising potential therapeutic avenue to eradicating HIV-1 from T reservoir cells of host patients, to prevent AIDS re-emergence.”