How to Think Yourself SLIM 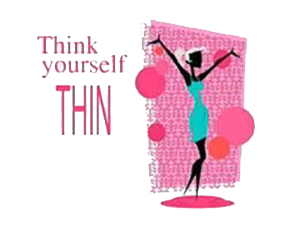 She first started imagining pac man type beings eating all the fat cells from the bits she wanted to lose weight from. She was doing it five times a day. She began to lose weight but then was faced with a dilemma. She said, “The first part of the female body to go down during weight loss is the breasts.” She didn’t want that. She’d always been proud in that arena, she relayed.

So she adapted her visualization so that when the pac men were full, instead of just exploding they travelled up the way and deposited the fat onto her breasts. It seemed to work magic.

After 5 months she dropped 21 pounds in weight and gained half a cup size.  She said, “It’s just marvellous.”

And amazingly, she said, she didn’t have any cravings for chocolate and other stuff she was eating so much of.

In a seminar in Sweden that I taught, some of the ladies were laughing heartily through the breakout session. During group feedback on their visualizations, I asked what had been so funny. One of them said they had created the BEST EVER weight loss visualization. Now I was intrigued, as was the rest of the group.

They shared that they imagined themselves as lollypops and Brad Pitt was licking them. And as he did, they got smaller and smaller. I’ll leave that one to your imagination!

In many ways, the brain doesn’t distinguish between real and imagery. If we visualize something happening then the brain can process it in some of the same ways as if it was actually happening.

I have come across many people who have used visualization as part of their weight loss strategy. Part of the reason it works, I believe, is that the brain is tricked into thinking that the fat is reducing and so it subtly alters our behavior, cravings, motivation, as well as, perhaps, even how the body stores fat and where it is stored.

Researchers at Carnegie Mellon University might be onto another novel way of using visualization to control weight.

They asked volunteers to imagine eating before they actually ate.

The study involved 51 people who were asked to imagine eating either 3 or 30 units of a particular food. The food in one of their experiments was M&Ms.

The reason for the coins in a machine was because the muscles used are similar to lifting food into your mouth and it was important that the volunteers all imagined the same number of hand movements.

After they did this, they were invited to eat some M&Ms from a bowl in preparation for what they were told was going to be a ‘taste test’. But it wasn’t really a taste test. It was really so that the experimenters could secretly record how many M&Ms they ate.

Incredibly, they found that those who imagined eating the most M&Ms (30) ate much less from the bowl than the other two groups.

The conclusion of the study was that imagining eating the M&Ms suppresses the appetite to eat more of them, just as if we had physically ate them. It kind of makes sense. It’s almost as if the brain thinks, “OK, I’ve had enough now. I’m full,” even though the person hasn’t actually eaten anything at all.

This is known as habituation. As we eat more, after a point our appetite reduces otherwise we’d keep on eating. It’s amazingly that the same thing seems to happen when we just imagine eating.

So if a person actually imagines the full process of eating – i.e., repetitively chewing and swallowing the food – it produces a similar effect in the brain to actually eating the food.

To the brain, the difference between real and imaginary is a thin line. In fact, in the words of Carey Morewedge, an assistant professor at Carnegie Mellon University who led the study, “The difference between imagining and experiencing may be smaller than previously assumed.”

It might be that we can imagine eating a meal, bite for bite, before we eat and then find that we don’t feel like eating as much and therefore weight loss is a natural side-effect. However, the research is still in its infancy and there is no data yet on whether imagining eating affects any of the body’s other systems, like blood sugar, for instance, or even whether it causes us to eat so much less that the body lacks the nutrition it needs.

There’s a lot of as yet unanswered questions so I’d caution against imagining eating a meal before eating without first speaking to your doctor. I think that’s just being sensible. If in doubt, show her or him this article.

But it certainly does show us another powerful use of the mind. It’s certainly something to think about…or imagine.

After completing his PhD, David worked for 4 years in the pharmaceutical industry developing drugs for cardiovascular disease and cancer. During this time he also served as an athletics coach and manager of one of the UK’s largest athletics clubs, leading them to three successive UK finals. Upon leaving the pharmaceutical industry, David co-founded the international relief charity Spirit Aid Foundation and served as a director for 2 years.

While writing his first book, David taught chemistry and ecology at James Watt College of Further and Higher Education and tutored chemistry at Glasgow University.

We have 2725 guests and no members online