Creating A Path Where There Is None 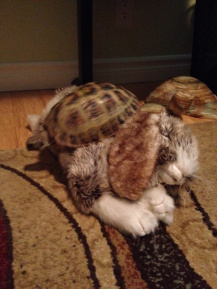 Do not go where the path may lead, go instead where there is no path and leave a trail. ~Ralph Waldo Emerson

This seems to be a theme in my life and likely, if not in yours yet, you may be pondering making your own way right now as well.

Some of the things that become important when you decide to blaze your own way, is to make a commitment, embrace responsibility, take action to back your words, believe and keep inspired, nurture courage and trust, let go of caring what others think, and follow your heart come what may.

Everyone right now is either creating their new path, in process of making the shifts to do so, are contemplating the idea, or are experiencing challenges because they are fighting what is in their hearts and the fact that time is up in terms of forcing the old to continue, or remaining in denial.

One of my greatest teachers in terms of determined focus, belief, and steadfast fortitude without fail or hindering faith, is my dear friend, Gaia (my Russian Tortoise).

Gaia knows what it takes to do what is in her heart and to follow through with a mission. She also has no concept of the word “impossible” – another important aspect to creating your own path where there is none.

Gaia will relentlessly forge ahead and doesn’t understand it when you say there is no “door” where she is determined to get through. She will sit for hours pushing forward into a corner of a room, because she believes she WILL get to where ever it is her heart is determined to go and she will create a door where there was none to the naked eye.

She also sees herself as much bigger than she physically is in this life, and I never have to be concerned about predator animals around her, as she will emanate an energy that blasts them so much, they go running off in the other direction.

Gaia cares not what you think of her, nor does she buy into the definitions and limiting boundaries you might place her in, given her size and chosen species she embodies in this life. She is unlike any tortoise you think you know.

She knows only her soul essence and its unlimited capabilities. She continues to operate from that all-knowing, all-being, and empowered Source.

Gaia also daily demonstrates that she has a mind of her own and will create a path or bridge where ever she feels called. She doesn’t circle around a barrier to her determined path. She doesn’t move out of the way or let the path define her direction. She simply goes through, the way she feels is the most efficient way that supports her motivations and intents, helping me to see that where there is a will, there is a way and NOTHING can stop your burning belief and heart’s desires, except you.

I was inspired today by Gaia, to share these inspirations. Currently she is indoors again with us, as she showed up back on Earth’s surface a few days before I got back home from my vacation, and with the rains, she is enjoying staying cozy for the moment until she can go back out again.

This morning I watched her, as I often do, create her own path, piggy-backing over Joy’s enchanted stuffed rabbit friend, rather than walking around it. The photos you see are of Gaia creating a bridge where one may have thought there was none.

Gaia has no fear and simply follows her heart.

I also had a magickal little experience with her, as I said good morning to Gaia under my desk where she slept in her favorite place all night near my computer and the electrical wires. As I looked at her a glint of pixie dust lit both of her eyes so ever-slight and sparkly, lasting just a few seconds and then disappeared. Then again more faintly and disappeared. It was not the light, as there was none to shine, and the glints along with the look in her wide-eyes and very present awareness in that moment, spoke much to me.  She is often mostly asleep when I find her, but she was quite awake, alive with enchantment, and that sparkle spoke timelessly to me.

May you also be inspired by Gaia and other visionaries to create your own path where there is none.

back to top
How To Tell If You Had A Past Life In Atlantis
Ungrounded Energy, A Widespread Issue
All Situations Are Temporary In An Impermanent Reality