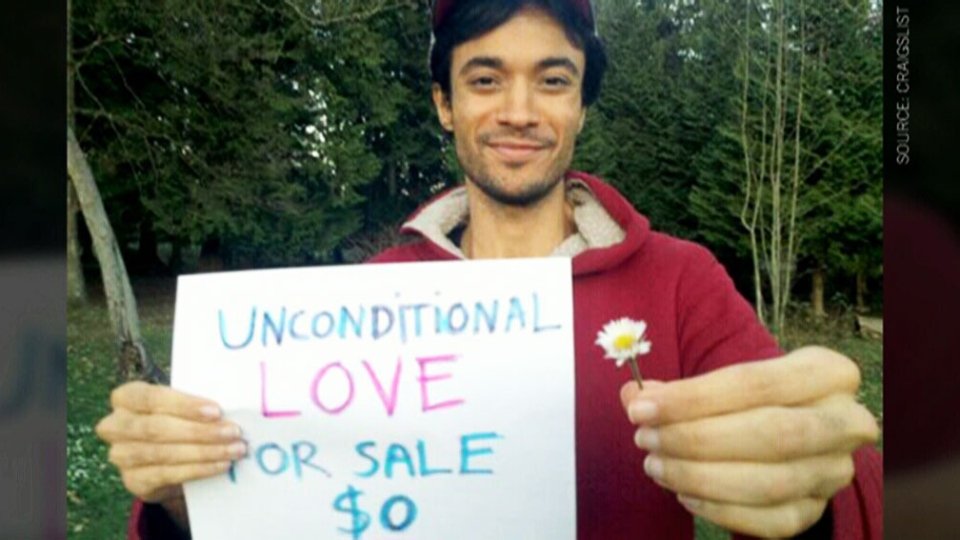 The internet went crazy with love and support when Brice Royer, after being diagnosed with stomach cancer, put an ad on Craigslist in which he offered unconditional love for $0. The online community rewarded his generous spirit by sending him carrots -- the only food he was able to digest without pain.

At this point, it seemed like Royer was completely on the receiving end of this immeasurable kindness, and while he appreciated it greatly -- "Literally, they have saved my life," he told The Huffington Post -- he knew he wanted to pay it forward. And that he did.

Francesca Murray saw Royer's Craigslist ad and decided to put her own struggles aside to help this 31-year-old man overcome his malignant gastrointestinal stromal tumor.

"I noticed that he needed somebody to cook," Murray said. "I'm a good cook, so I offered to cook for him."

What she didn't tell him right away was that her own living situation was less than favorable.

"I was really surprised when I found out later that she actually lives in a women's shelter with a four-year-old," said Royer.

That's when Royer knew it was time to give back. After learning of Murray's situation, he recruited a friend to deliver organic groceries every week to the shelter that she shared with six others and her young daughter -- the perfect gift for someone who loves to cook.

While this assistance in itself was enough to change Murray's life for the better, Royer wasn't done trying to help her make improvements. Upon finding out that she had to leave the shelter in February, he started a mission to raise enough funds to buy the single mother a self-sufficient, solar powered 300-square-foot house.

Said Royer of the mission, "We're looking for places like backyards, driveways or any communal spaces that a landlord would provide for us to park this tiny home."

After starting an online fundraiser, aiming to raise $25,000 to cover both short and long-term housing solutions, Royer's campaign has already raised a significant chunk of its goal.

As if her community hadn't already proven how much supportive, kind potential it had, another woman stepped up and paid it forward, as well. Sharon Spruston, after hearing of Murray's situation, decided to offer her home to her for the holidays while she was out of town.

I like to help people. It makes you feel so good and something about [Murray] and her daughter spoke to me.

"I like to help people. It makes you feel so good and something about [Murray] and her daughter spoke to me."SHARON SPRUSTON

This chain of kindness has touched many people -- and it all started with a Craigslist ad.

back to top
Riddle: Is the Truth a Lie?
The News: Mind Control Through “Cognitive Dissonance”
Getting Help From Your Higher Self

We have 1608 guests and no members online