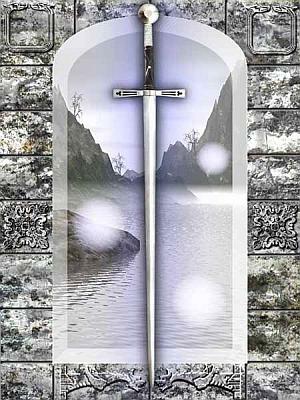 Following the burial of Lot and the eleven kings, Malory tells us that Morgan le Fay loved another man more than her husband Uriens or her brother Arthur. When Arthur gave the care of Excalibur into Morgan's hands, she had a duplicate made. Malory states that she gave the real scabbard to her love, Accolon.

Later, after the war with the five kings, Arthur goes hunting with Uriens and Accolon. After a long and arduous hunt, they end up on foot (having ridden their horses to death) at the edge of a great water. It was fast approaching night when they discover a ship draped in silk. Twelve damsels of the ship welcome them and feed them richly and then take them each into a separate chamber.

When he awoke, Accolon found himself beside a deep well with a great marble fountain and knew that treachery had occurred. Before he can consider all of the possibilities of the treachery, a dwarf with a great mouth and flat nose came and saluted him, telling him that Morgan sent her regards and the sword Excalibur. Accolon had promised to do her bidding and the dwarf informed him that if he would do what he had promised her then he would fight a knight the next day at the hour of prime. Accolon is invited by a knight and a lady to rest at a manor nearby. His host turns out to be Sir Ontzlake who has been wounded recently (through both his thighs with a spear - a little reminiscent of the wound of Pellam). Ontzlake has been challenged by his brother Damas to a battle to determine which brother will control all of their lands. Part in chivalry, part in fulfilling his promise to Morgan, Accolon agrees to champion Ontzlake's cause.

While Accolon was learning of Morgan's plans, Arthur lay in Damas' prison. In order to secure his release and that of twenty other knights being held there, Arthur has agreed to act as champion in Damas' fight against his brother. In the morning at prime, Arthur is ready to take the field. A maiden arrives from Morgan to give Arthur the counterfeit Excalibur.

As Accolon and Arthur begin their battle, Nimue arrives having discovered Morgan le Fay's plans. From the outset, Accolon's attack is the stronger. Arthur is unable to penetrate his defense and takes many blows that would have stopped any ordinary man. Arthur begins to perceive that the sword he has is not Excalibur and the more he fights, the more convinced that the other knight has Excalibur. Accolon is bold because he knew he held Excalibur and would not allow Arthur to rest. Arthur is driven to anger and strikes Accolon but his sword breaks leaving him to defend himself with just his shield.

Accolon demands Arthur's surrender; but because of his promise and for his own honor, Arthur will not. He tells Accolon that if he slay him while weaponless, he will have the shame. But Accolon presses him and will not spare him, knocking Arthur to the ground. Arthur returns the blow using his shield to ward Accolon away. Nimue has pity on Arthur for his great courage and at the next attack, she cause Accolon to loose his grip and Excalibur to slip from his grasp. Arthur quickly grasps it and realizes that it is his own and with a quick feint, he grabs the scabbard from Accolon and throws it far from them. Arthur rushes Accolon and ripping off his helmet, he gives him a stroke that causes blood to run from his ears, nose, and mouth - a fatal concussion.

As Arthur prepares to slay him, Accolon will not yield and Arthur realizes that he knows the knight, remembering the ship and the treachery. Accolon confesses his plans with Morgan le Fay. Accolon realizes the falseness of his plans and cries mercy of Arthur and for his part, even though he still considers him a traitor, Arthur understands that the real enemy in all of this was Morgan, his sister.

Arthur stops the battle and revealing himself, rules in Ontzlake's behalf. He takes Accolon and proceeds to a nearby abbey where their wounds are treated; but Accolon dies within four days. Arthur has his body transported in a horse-bier accompanied by six knights to Camelot to be presented to Morgan with the word that he had Excalibur back in his possession.

And so ends the traitorous life of Sir Accolon of Gaul, a good knight that allowed the love of a woman and his own ambitions to lead him to betray his own lord.