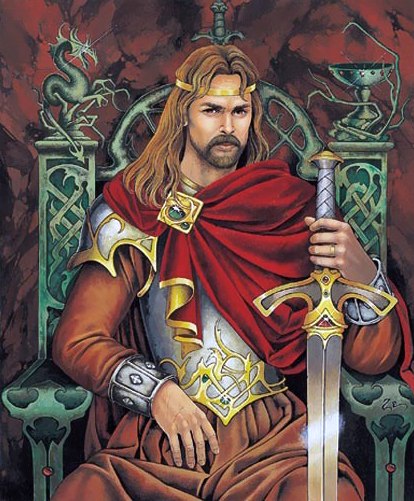 Arthur was the legendary English King - 'Arthur of the Britons', before Saxon times. He was born out of wedlock and raised by wizard Merlin. When only a boy, after many men had tried and failed, Arthur gained the throne by withdrawing the magic sword Excalibur from a stone. The nearby Cadbury Castle, at North Cadbury supposedly became his 'Camelot'.

After his many exploits and stories concerning his Knights, the Round Table and the Holy Grail, he was wounded by Mordred at the battle of Camlan. This was around the year 542 and he was then taken across the water to the Isle of Avalon for his wounds to be healed. Glastonbury would indeed still have been an island at that time, so it was quite possible for a boat to bring him to the only place where any medical attention was available, which would have been at a monastery - Glastonbury Abbey. Arthur was mortally wounded however and it is said he was buried in the cemetery on the south side of the Lady Chapel, at Glastonbury Abbey. He was buried between two stone pyramids and at great depth.

Centuries later (in 1191) prompted by hints and rumours, the monks excavated this same spot in the cemetery and they dug down sixteen feet, to find an oaken coffin. At a depth of seven feet they found a stone beneath which was a leaden cross with an inscription His iacet inclitus Arturius in insula Avalonia - variously interpreted to read 'Here lies King Arthur buried in Avalon'! The coffin contained two bodies - a great man and a woman, whose golden hair was still intact, until touched, when it crumbled away. The bodies were said to be Arthur's and Guinevere's.

A century later in 1278 the bones were placed in caskets and transferred during a state visit by King Edward 1, to a black marble tomb before the High Altar in the great Abbey Church. There they remained until the Abbey was vandalised after the dissolution in 1539. No one has seen, or heard anything of them since.

Legend proclaims that after Arthur's death, a powerful spirit haunted the ruins of the Abbey, appearing as a black-armoured knight with red glowing eyes and a burning desire to eradicate all records of the ancient Arthurian legends, which is why, it is said, that those seeking to discover the truth, find so few facts available.

Today a notice board marks the spot of Arthur's final resting place. Occasionally people lay flowers there to honour this mighty King whose life and death gave birth to so many myths and legends. These mystical tales that still envelope Mystical Glastonbury in a cloak of mystery add to its profoundly rich and timeless history.

Of Brutus' blood, in Brittaine borne,  King Arthur I am to name;  Through Christendome and Heathynesse  Well knowne is my worthy fame... 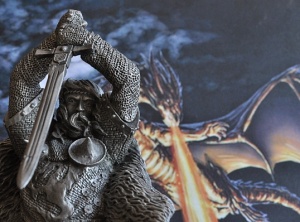 Uther was one of three sons of Constans, the King of Briton. Upon Constans' death, Vortigern, a usurper to the throne, became king and was soon defeated by Uther and his brother Pendragon. Merlin, a valued advisor, predicted that one of the brothers would... Read more 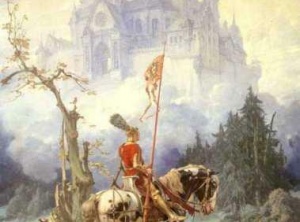 A retelling drawing from many different versions. There is no one, true version. An Island Divided In the years of upheaval after the Roman withdrawal in 410 AD, Britain became an island of small kingdoms. Aurelius Ambrosius tried to unite the small Romano-Celtic kingdoms against their... Read more 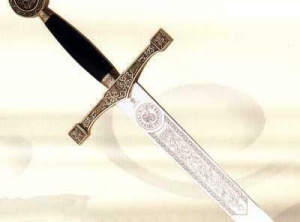 Excalibur is the mythical sword of King Arthur, sometimes attributed with magical powers or associated with the rightful sovereignty of Great Britain. Sometimes Excalibur and the Sword in the Stone (the proof of Arthur's lineage) are said to be the same weapon, but in... Read more 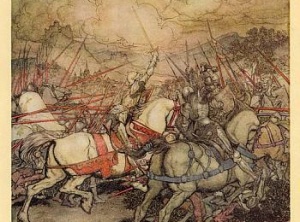 King Arthur's Twelve Battles A discussion by David Nash Ford The Welsh historian, Nennius, records twelve great victories in battle during Arthur's time as Dux Bellorum. Much of his material is mythical, however, and the magical number 12 does not sit well for historical evidence. Some... Read more 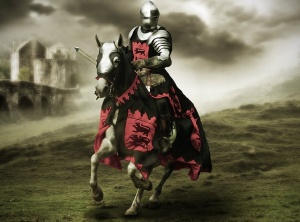 While it is difficult to find precise rules laid down for the conduct of a knight, it is clear that a code is recognized, even though, in the stern tests of day to day life, it was rarely, faithfully lived up to. Amid all... Read more 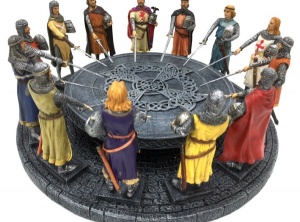 Who were they? The Round Table - first mentioned by Wace in his "Roman de Brut" - was not only a physical table, but the highest Order of Chivalry at the Court of King Arthur. Its members were supposedly the cream of the British military... Read more 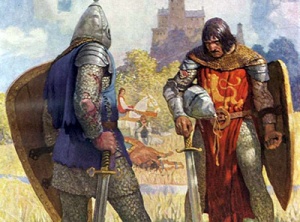 Sir Lancelot Du Lac Lancelot is the greatest of Arthur's knights. Son of King Ban of Benwick, he is known as Lancelot of the Lake or Lancelot du Lac because he was raised by the Lady of the Lake. Among his many adventures are the... Read more 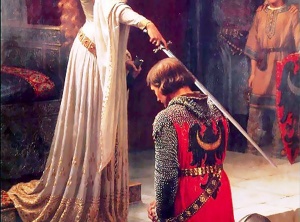 The dark ages held many myths. King Arthur’s wife Guinevere is one of those myths. Every scholar, historian and poet have recognized Guinevere but with reluctance. One reason for the apprehension is the lack of supporting documentation. Some historians claim there were 3 Guineveres... Read more 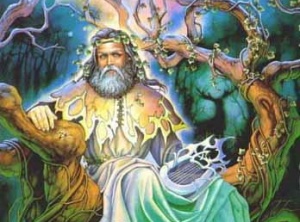 Merlin first appears in extant records (Armes Prydein, Y Gododdin) from the early 10th century as a mere prophet, but his role gradually evolved into that of magician, prophet and advisor, active in all phases of the administration of King Arthur's kingdom. He was... Read more 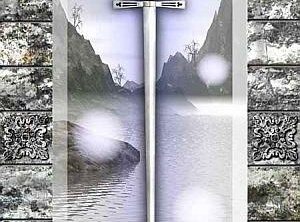 Accolon of Gaul Following the burial of Lot and the eleven kings, Malory tells us that Morgan le Fay loved another man more than her husband Uriens or her brother Arthur. When Arthur gave the care of Excalibur into Morgan's hands, she had a duplicate... Read more 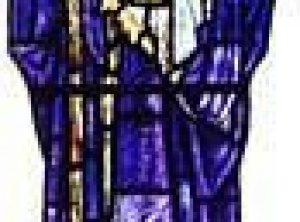 Joseph of Arimathea Joseph of Arimathea was a wealthy disciple of Jesus, who, according to the book of Matthew 27:57-60, asked Pontius Pilate for permission to take Jesus' dead body in order to prepare it for burial. He also provided the tomb where the crucified... Read more

Origins of The Holy Grail 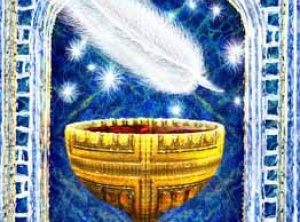 The Holy Grail The Tradition: The Holy Grail was a vessel used by Christ at the Last Supper. Given to his grand-uncle, St. Joseph of Arimathea, it was used by him to collect Christ's blood and sweat while Joseph tended him on the Cross. After... Read more

The Tale of Taliesin 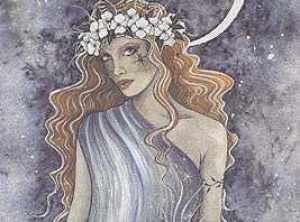 by Jennifer Cochrane Once there was a witch named Ceridwen, and she had two children. The one, her daughter, was as beautiful a child as you could ever hope to see; the other, her son Morfran, was so ugly, ill-favored and stupid that he... Read more 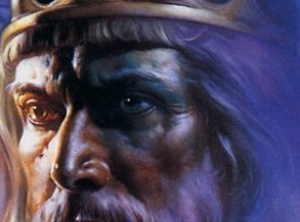 The name Arthur may be (and according to K. H. Jackson certainly is) a form of Artorius, a Roman gens name, but, according to J. D. Bruce, it is possibly of Celtic origin, coming from artos viros (bear man) - see Welsh arth gwyr... Read more

The Many King Arthurs of the Britons 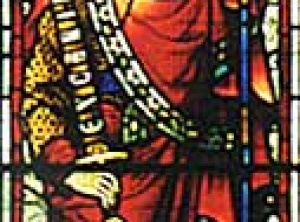 Arthur, King of the Britons A biography by David Nash Ford Arthur, it seems, is claimed as the King of nearly every Celtic Kingdom known. The 6th century certainly saw many men named Arthur born into the Celtic Royal families of Britain but, despite attempts to... Read more 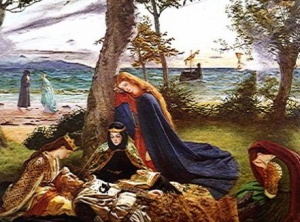 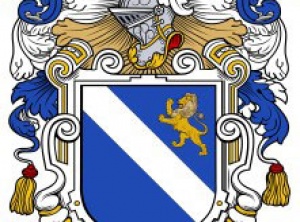 We have 1465 guests and no members online