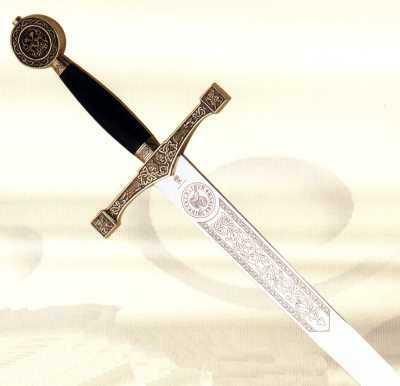 Excalibur is the mythical sword of King Arthur, sometimes attributed with magical powers or associated with the rightful sovereignty of Great Britain. Sometimes Excalibur and the Sword in the Stone (the proof of Arthur's lineage) are said to be the same weapon, but in most versions they are considered separate. The sword was associated with the Arthurian legend very early; in Welsh, the sword was called Caledfwlch.

Excalibur and the Sword in the Stone

In surviving accounts of Arthur, there are two originally separate legends about the sword's origin. The first is the "Sword in the Stone" legend, originally appearing in Robert de Boron's poem Merlin, in which Excalibur can only be drawn from the stone by Arthur, the rightful king.

The second comes from the later Post-Vulgate Suite du Merlin, which was taken up by Sir Thomas Malory. Here, Arthur receives Excalibur from the Lady of the Lake after breaking his first sword, called Caliburn, in a fight with King Pellinore.

The Lady of the Lake calls the sword "Excalibur, that is as to say as Cut-steel," and Arthur takes it from a hand rising out of the lake. As Arthur lay dying, he tells a reluctant Sir Bedivere (Sir Griflet in some versions) to return the sword to the lake by throwing it into the water. Bedivere thinks the sword too precious to throw away, so twice only pretends to do so. Each time, Arthur asks him to describe what he saw. When Bedivere tells him the sword simply vanished underwater, Arthur scolds him harshly. Finally, Bedivere throws Excalibur into the lake. Before the sword strikes the water's surface, the hand reaches up to grasp it and pull it under.

Arthur leaves on a death barge with the three queens to Avalon, where as his legend says, he will one day return to save Britain from a threat.

Malory records both versions of the legend in his Le Morte d'Arthur, and confusingly calls both swords Excalibur. The film Excalibur attempts to rectify this by having the Lady of the Lake only repair the sword after it is broken.