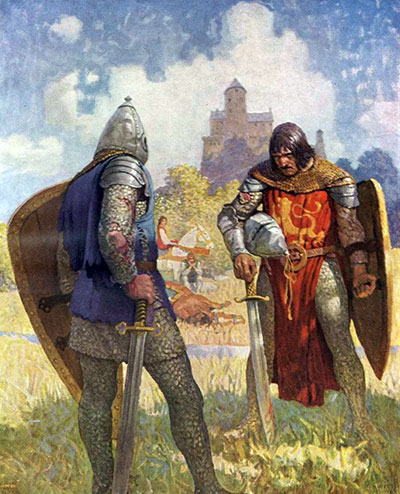 Lancelot is the greatest of Arthur's knights. Son of King Ban of Benwick, he is known as Lancelot of the Lake or Lancelot du Lac because he was raised by the Lady of the Lake. Among his many adventures are the rescue of the abducted Queen Guinevere from Meleagant, an unsuccessful quest for the Holy Grail and the rescue of the queen after she is condemned to be burned to death for adultery. Lancelot is loved by Elaine of Astolat, who dies because her love is unrequited. Elaine, the daugher of King Pelles, tricks Lancelot into sleeping with her and from that union Galahad is born. His love for Guinevere ultimately brings about the downfall of Arthur's realm.

According to legend Lancelot was the son of King Ban of Benwick and his queen, Elaine. King Ban became involved in a war with the neighboring kingdom of King Claudus. Claudus defeated Ban and forced the king and queen to flee. As they were fleeing, Ban looked back and the sight of his home in flames caused him to fall in a swoon from which he never rose. Running to his aid, Elaine left Lancelot beside a lake and the Lady of the Lake stole the child away and raised him in her underwater palace where he was known as Lancelot of the Lake. 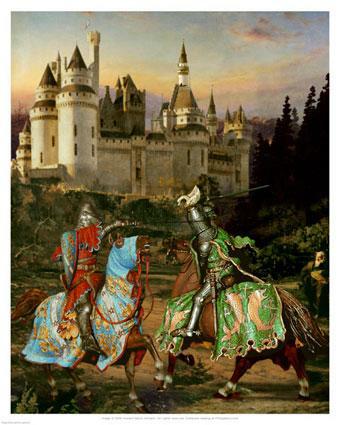 Lancelot quickly developed his great strength and skill in arms. At the age of eighteen, he met his cousins, Bors and Lional, and his half-brother, Ector, and the four men set out for Camelot.

In memory of King Ban's support during Arthur’s youth, Arthur found great favor with Lancelot and dubbed him a knight on St. John's Day. One of Lancelot's first tasks as a knight was to fetch Arthur's bride, Gwenivere, to Camelot for their wedding. During the journey to Camelot, Gwenivere and Lancelot fell in love.

Lancelot quickly established himself as the greatest Knight of the Round Table and Arthur's closest companion and champion. After joining the ranks of Knights of the Round Table, Lancelot pursued quest after quest in order to be away from Gwenivere.

On one of his Quests Lancelot visited King Pelles the Grail Guardian and saved his daughter Elaine of Corbenic, from an enchantment in which she had been imprisoned in a tub of boiling water for several years. Brisen, her nurse, arranged for Lancelot to think Elaine was Gwenivere and he slept with her. Legend suggests that Lancelot might have taken a vow of celibacy when he could not love Gwenivere. As a result of his interlude with Elaine, Galahad was conceived. But in his mind he had not only betrayed his love for Gwenivere he also had broken his vow and drove himself mad. 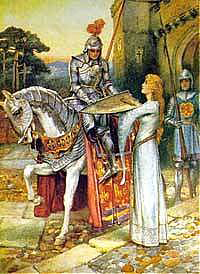 Lancelot's son Galahad appeared at court and they began their quest for the Holy Grail. Lancelot had several visions of the Grail and finally found the door to the chapel where the holy vessel was kept. He was prevented from entering by an angelic presence and fell into a trance which lasted for several weeks. During this time, it was made clear to him this quest was at an end and his failure was due to his love for Gwenivere, which exceeded his love for God.

For a time, Lancelot was determined to renounce his love for Gwenivere, but once he returned to Camelot their affair continued its course. When Lancelot and Gwenivere were discovered together in her chamber by Mordred, just when they had decided to end their love affair, Lancelot fled and Gwenivere was sentenced to burn at the stake. Lancelot returned to rescue her, accidentally killing four Knights in the process.

"War between Lancelot and Arthur ensued, but was broken off when Arthur had to return to Camelot to deal with Mordred's rebellion". Hearing of this, Lancelot returned to aid Arthur but arrived too late to save him from a mortal wound. After the war, Lancelot visited Gwenivere one last time in a nunnery at Amesbury and then put aside his weapons and armor to become a hermit, which was how he lived out the rest of his life. 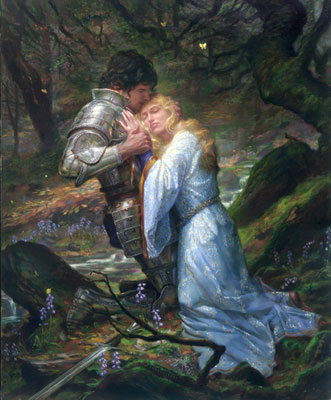 Lancelot was buried at Joyous Guard. The last of the original Knights of the Round Table Sir Ector, delivered the following eulogy:

"Three Knights of Battle were in the court of Arthur: Cadwr the Earl of Cornwall, Launcelot du Lac, and Owain the son of Urien. And this was their characteristic,- that they would not retreat from battle, neither for spear, nor for arrow, nor for sword. And Arthur never had shame in battle the day he saw their faces there. And they were called the Knights of Battle." 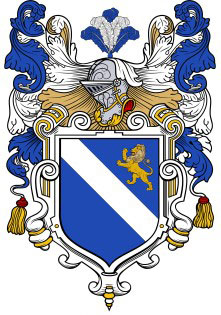 We have 753 guests and no members online