Origins of The Holy Grail 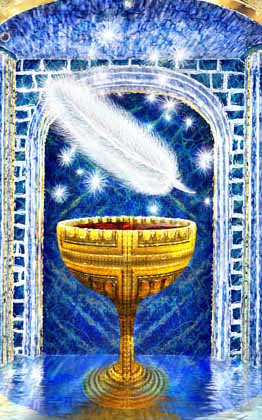 The Tradition: The Holy Grail was a vessel used by Christ at the Last Supper. Given to his grand-uncle, St. Joseph of Arimathea, it was used by him to collect Christ's blood and sweat while Joseph tended him on the Cross. After Christ's death, Joseph was apparently imprisoned in a rock tomb similar to the one he had given for the body of his grand-nephew.

Left to starve, he was sustained for several years by the power of the Grail which provided him with fresh food and drink every morning. Later, St. Joseph traveled to Britain with his family and several followers. He settled at Ynys Witrin (Glastonbury), but the Grail was taken to Corbenic where it was housed in a spectacular castle, guarded always by the Grail Kings, descendants of Joseph's daughter, Anna (Enygeus) and her husband, Brons.

Centuries later, the location of the Great Castle of Corbenic became forgotten. At the Court of King Arthur, however, it was prophesied that the Grail would one day be rediscovered by a descendant of St. Joseph: the best knight in the land, the only man capable of sitting in the mysterious Siege Perilous. When such a man arrived in the form of Galahad, the son of Lancelot, along with a miraculous, though brief, vision of the Grail itself, a quest to find this holiest of relics began.

Through many adventures and many years, the Knights of the Round Table crossed Britain from one end to another in their search. Perceval (Peredyr) discovered the castle in a land that was sickly like its spear-wounded King. When entertained by this "Fisher" or "Grail King", however, he failed to ask of the grail and left empty-hand. Lancelot next reached Corbenic, but was prevented from entering because of he was an adulterer. Finally Galahad arrived. He was permitted entry to the Grail Chapel and allowed to gaze upon the great cup. His life became complete and together grail and man were lifted up to heaven. 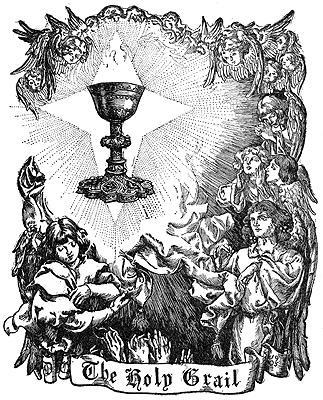 The Names: The Holy Grail first appears as simply "a grail" in the works of Chrétien de Troyes. The word is probably derived from the Old French word graal meaning a "broad and capacious dish or salver". Though usually thought of as being a cup or chalice, the Grail has indeed been variously described as a platter, dish, a cornucopia, horn of plenty or even a book or a stone.

The name of the Castle of Corbenic has competing explanations. Old Welsh Cors, meaning "Horn," the Horn of Plenty as the Grail is sometimes described may have become confused with the Old French Corps, producing Corps-Benoit meaning "Holy Body," ie. the Body of Christ.

More likely, however, is the suggestion that Corbenic stems from Corbin-Vicus. The ending is almost certainly derived from the Latin for "Settlement," while Corben is a French translation of the word Crow or Raven: Bran in Welsh. This was also a man's name and, as Brons, he appears as St. Joseph's son-in-law, one of the first Grail Kings. Hence Corbenic was "Bran's Settlement". It may be identical to the home of Lancelot's father, Caer-Benwick.

Ancient Origins: The quest for a divine vessel was a popular theme in Arthurian legend long before medieval writers introduced the Holy Grail to British mythology. It appears in the Mabinogion tale of Culhwch and Olwen, but particularly well-known is the story of the Preiddeu Annwfn or "Spoils of the Otherworld" as recounted by Taliesin.

Arthur and his warriors sail off to the Celtic Otherworld to capture the pearl-rimmed Cauldron of Annwfn: like the grail it was a giver of plenty, but also of prophecy. It was at last discovered at Caer-Siddi (or Wydyr), an island bound castle of glass, where it was guarded by nine divine maidens; but the ensuing perils were too much for even Arthur's men. The mission was abandoned and only seven of their number returned home. 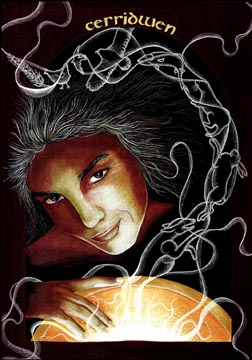 Celtic Cauldrons were used in ceremonial feasting as early as the Late Bronze Age. Ritual deposits in Llyn Fawr (Glamorgan) included such vessels, though the best known example is the Gundestrup Cauldron found in the peat bogs of Jutland (Denmark).

Highly decorated with portraits of many Celtic deities, this vessel would once have held up to twenty-eight and a half gallons of liquid. These finds clearly point to the religious importance of cauldrons, as found in the Arthurian stories and even older Celtic mythological parallels.

The magic Otherworld vessel was the Cauldron of Ceridwen, the Celtic Goddess of Inspiration. She is remembered today in the archetypal hideous cauldron-stirring witch. She once set about brewing a drink of knowledge and wisdom for her hideous son, but her kitchen-boy, Gwion, accidentally tasted the concoction, preventing anyone else from benefiting from its affects.

A great battle of wills ensued, for Gwion now held all the knowledge to escape the Goddess' wrath. The two changed themselves into various animals in an attempt to outwit each other before Gwion was swallowed whole as a grain of wheat. He was eventually reborn as the great bard, Taliesin! 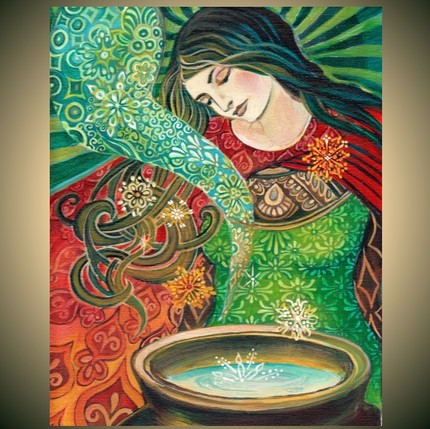 The cauldron then reappears in the story of Bran Fendigaid (the Blessed), not only as a vessel of knowledge and plenty, but also of rebirth. The great Celtic warrior God, Bran, obtained his life-giving vessel from a giantess (or thinly veiled Ceridwen) who had been expelled from a Lake in Ireland.

The Emerald Isle here personifies the Celtic Otherworld. The magic vessel would restore to life the body of any dead warrior placed within it: a scene apparently depicted on the Gundestrup Cauldron. Bran's sister marries the King of Ireland and they are given the cauldron as a wedding gift.

However, when hostilities between the two countries break out, Bran travels across the ocean to regain this dangerous prize. He is eventually successful, but is wounded by a poisoned spear and, like Arthur, only seven of his men return home. The name, the castle (already discussed), the wound, the mystic vessel, the journey: Bran Fendigaid is clearly Brons, the Grail King, son-in-law of Joseph of Arimathea.