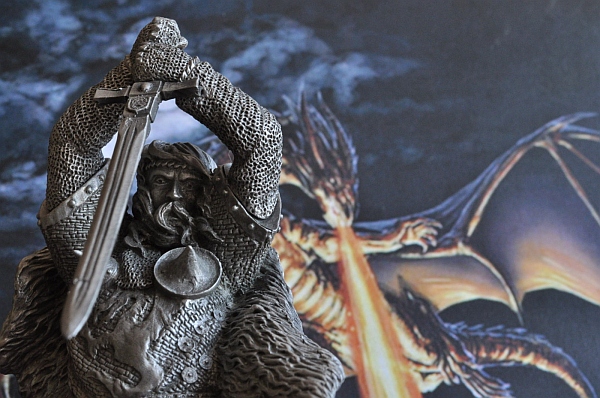 Uther was one of three sons of Constans, the King of Briton. Upon Constans' death, Vortigern, a usurper to the throne, became king and was soon defeated by Uther and his brother Pendragon. Merlin, a valued advisor, predicted that one of the brothers would be fatally wounded in a battle with the Saxons. As foreseen, Pendragon was killed and Uther succeeded to the throne. In honor of his slain brother he took his name, Pendragon.

Merlin, still favored as an advisor, was asked to bring huge stones from Ireland to form a shrine to the slain brother. This monument is now called Stonehenge. Merlin was also asked to prepare a great Round Table, around which were seated the greatest nobles of the land. To be accepted at this Table, the men had to swear an oath to assist one another, even at the cost of his own life. He must also attempt the most dangerous adventures, lead a life of solitude when necessary, bear arms at the first signal, and never leave a battle until the enemy had been defeated (unless it was night or he had been separated from his men).

At the great festival to celebrate this honor, King Uther met the Lady Igraine, who had accompanied her husband Gorlois. The lady, a most beautiful woman, caught the eye of the bachelor king. When he professed his love for her, she told him that she was flattered, but happily married. When her husband, the Duke, heard of the King's attention to his wife, he hurriedly left the castle for home -- without the King's permission. Outraged at this insult and disrespect, Uther sent word that the Duke was either to return or face the challenge of war. The Duke, fearful for his wife's safety, refused and war broke out between the forces of the two men.

By now, the King was sick with love. He told his men and Merlin that he would surely die of a broken heart if he could not have her. At this Merlin approached Uther with a scheme to unite the two. In payment, he wanted the child who would be born. (Merlin's true reason for taking the child was to protect him from the war and assure that the child would be crowned king).

While the Duke was away fighting the King's men, Merlin dressed the King to look like the Duke and, under the cover of darkness, sent King Uther into the Duke's castle. The Lady Igraine, completely fooled by the excellent disguise, thought her husband had returned from battle. That night she conceived a child with Uther (who she thought was the Duke). 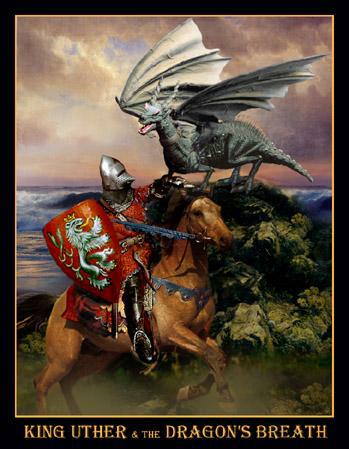 Uther sneaked out before morning. The Lady was awakened by a messenger, bearing the terrible news that her husband had been killed the night before. (Many tales hold Merlin responsible.) After learning the time of death, the Lady realized that Gorlois had been slain three hours before he had visited her. Without truly understanding the event, she believed that the spirit of her husband had visited her in her bed. She did not, however, tell anyone of this strange occurrence.

Now that Igraine was a widow, Uther once again wanted to make her his wife. Thirteen days after the Duke's death, Igraine became his Queen. They lived at his castle Tintagel. Her daughter from her marriage to the Duke, Morgan LeFay, was sent to a nunnery for schooling. This daughter was later to succumb to evil and play a great part in Arthur's ruin.

Several months later, Igraine discovered the pregnancy and was saddened that the Duke was not alive to see the birth of their child. When pressured by Uther, she told of the strange visit on the night of the Duke's death. Uther then revealed the truth about that night and Igraine was overjoyed to know that she was married to her child's true father. She also realized that, if it was a son, he would follow in his father's footsteps and become king.

When a son was born, Merlin returned to claim him, as had been previously arranged. Merlin promised that he would be properly cared for and turned him over to Sir Ector and his family, who would act as foster parents. Sir Ector wasn't told of the child's true identity. Ector's wife had given birth to a son, Kay, who would be a companion and brother to the child. Two years later, Uther became quite ill. Constant warring tore the kingdom apart, but, despite his illness, Uther led his men to victory. On his deathbed, Uther called Merlin and the nobles to tell them that he had a son who would succeed him to the throne. Then he died. Arthur was fifteen when the King died and was unaware of his true heritage and the circumstances of his birth. He did not know that Uther was his true father and that he was heir to the throne. Without an obvious successor, the kingdom was once again thrown into chaos and war.

We have 1472 guests and no members online