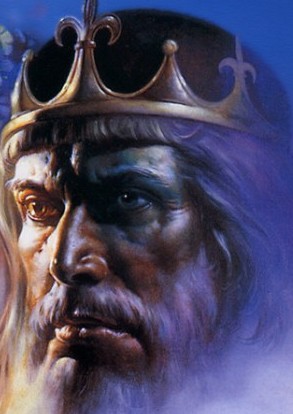 The name Arthur may be (and according to K. H. Jackson certainly is) a form of Artorius, a Roman gens name, but, according to J. D. Bruce, it is possibly of Celtic origin, coming from artos viros (bear man) - see Welsh arth gwyr (T. R. Davies). Bruce also suggests the possibility of a connection with Irish art (stone).

An outline of the hero's life is given by Geoffrey of Monmouth (twelfth century) in his Historia Regum Brittaniae - History of the Kings of Britain. Just how much of this life was Geoffrey's invention and how much was culled from traditional material is uncertain.

He tells us that King Arthur was the son of Uther and defeated the barbarians in a dozen battles. Subsequently, he conquered a wide empire and eventually went to war with the Romans. He returned home on learning that his nephew Mordred had raised the standard of rebellion and taken Guinevere, the queen. After landing, his final battle took place.

The saga built up over the centuries and Celtic traditions of Arthur reached the Continent via Brittany. Malory's Le Morte D'Arthur would become what many considered the standard 'history' of Arthur. In this, we are told of Arthur's conception when Uther approached Igraine who was made, by Merlin's sorcery, to resemble her husband. The child was given to Ector to be raised in secret. After Uther's death there was no king ruling all England. Merlin had placed a sword in a stone, saying that whoever drew it out would be king.

Arthur did so and Merlin had him crowned. This led to a rebellion by eleven rulers which Arthur put down. He married Guinevere whose father gave him the Round Table as a dowry; it became the place where his knights sat, to avoid quarrels over precedence. A magnificent reign followed, Arthur's court becoming the focus for many heroes. In the war against the Romans, Arthur defeated the Emperor Lucius and became emperor himself. However, his most illustrious knight, Lancelot, became enamoured of Guinevere. The Quest for the Holy Grial began and Lancelot's intrigue with the Queen came to light.

Lancelot fled and Guinevere was sentenced to death. Lancelot rescued her and took her to his realm. This led Arthur to crossing the channel and making war on his former knight. While away from Britain, he left Mordred in charge. Mordred rebelled and Arthur returned to quell him. This led to Arthur's last battle on Salisbury Plain, where he slew Mordred, but was himself gravely wounded. Arthur was then carried off in a barge, saying he was heading for the vale of Avalon. Some said he never died, but would one day return. However, his grave was supposedly discovered at Glastonbury in the reign of Henry II (1154-89).