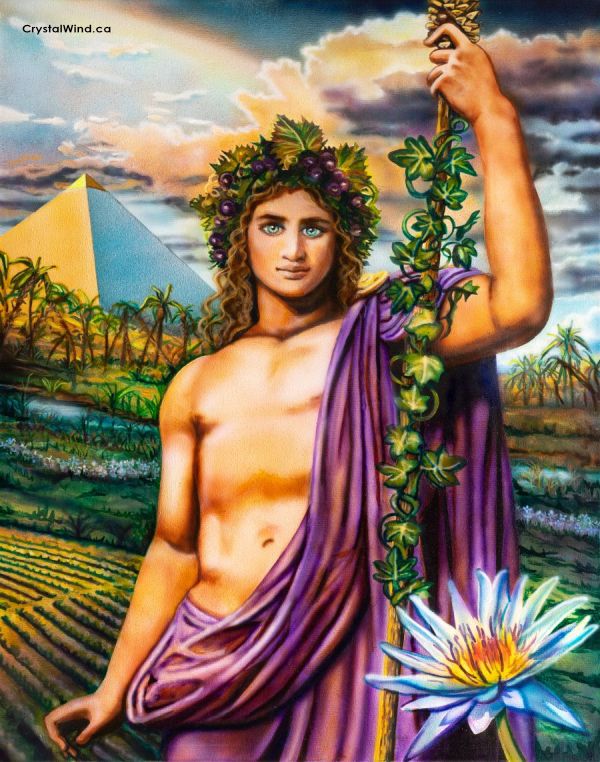 Dionysus – his name evokes the sound of wine splashing into sun filled glasses and voices raised in celebration.  As wine engenders freedom of expression, Dionysus was “The Liberator” from social constraints.

Like Ken Kesey and his Merry Pranksters hitting the road in the 60’s, Dionysus traveled with a dancing retinue of nymphs, fauns, satyrs, centaurs, leopards, tigers and goats. His caravan careened from Thrace across Asia, bearing the gift of wine and collecting groupies along the way. With his long hair and androgynous beauty, Dionysus was rock star royalty – indeed, he was the god of the performing arts. However, this collective quest for euphoric excess was fueled by the pathos of the Outsider, and flowing beneath the rivers of wine were undercurrents of madness.

The earliest records of Dionysus dates from 1500-11000 BCE Mycenaean Greece. Also known as Bacchus, his presence spanned the Roman Empire as far as Palestine. In Egypt, Dionysus merged with Osiris as an agricultural and fertility god.  Some historians believe it was a coin toss as to whether Jesus or Dionysus would prevail as the figurehead to unify Roman religion, evinced by the grape vine metaphors in scripture, art and the ritual of holy wine. (Dionysus created the grape vine from his blood.)  Paganism was outlawed by Emperor Theodosius in 392 AD and its influence on Christian symbolism was brutally expunged. However, a death/rebirth god will re-emerge like green shoots to break through the cracks of control. Early Christian art depicts the Saviour as a smooth-faced, sensitive youth whilst Leonardo Da Vinci’s two paintings of the adult John the Baptist are nearly identical to ancient portrayals of Dionysus.

From his conception, Dionysus threatened the status quo, being illegitimate and neither a god nor mortal, born of Zeus and the mortal princess Semele. His pregnant mother was murdered by Zeus’ wife Hera through trickery, and her unborn child was sewn into Zeus’ thigh, where he would emerge as “The Twice Born.” To protect the infant Dionysus from Hera’s rage, the god Hermes delivered him to mountain nymphs who disguised, and perhaps raised, Dionysus as a girl. The satyr Silenus was his guardian and tutor.  As gender non-conforming Dionysus was neither human nor deity, Silenus was neither man nor beast.  From the grape vine born of his blood, Dionysus invented the arts of viticulture and winemaking. Thus, he embarked to share these gifts with humankind, for whom he felt a tender empathy.

Beautiful Dionysus discovered his bride, the Minoan princess Ariadne, abandoned and sleeping on the shore of Naxos. (Ariadne was also quite the outsider – a story for another time.) Their happy marriage and mutual devotion are legendary, yet Dionysus had lovers of both sexes, mortal and divine. Dionysus, as an agricultural and fertility god, brings to mind a hermaphroditic flower in which sexuality is self-inclusive. The spectrum of gender is expressed as one “gorgeously unique” entity.

The binary can be compared to the duality of a chessboard whose unyielding squares turn interaction into a conflict or standoff. Is Dionysus the wild card life-force that propels us beyond either/or, beyond good and evil, life or death? If inspiration is an altered state, is Dionysus our capacity for surprise, originality, innovation, subversive joy and social change? Is overturning normality necessary for advancing a cultural shift?

Patron of the Arts

When inhibitions are lowered, we’re more likely to pursue love or the Muse – from the flowing conversation and music at Greek symposia, to Girls’ Night Out or Paint and Sip parties.

Dionysus was a patron of the arts; specifically, the god of comedy, tragedy, playwrights and actors. Theatre found its origins in the sacred rituals of deity impersonation and the wearing of masks. As Dionysus crossed the god/mortal divide to drown human sorrow, humans aspired to channel his presence. On occasion, psychoactive plants were added to wine to give access to fantastic and prophetic visions. As depicted in this article’s painting, the blue lotus placed in wine was Egypt’s gateway to enlightened bliss.

As rituals evolved into dramaturgy, the non-binary path of Dionysus was evident as men played female roles; a practice that persisted into the 1660’s. Like any ecstasy, a play is a compelling but fleeting illusion intended to cause a lasting shift in perspective. “Satire” comes from “satyr,” as in Silenus and other members of Dionysus’ tribe. The Greek theatron was the safe place for playwrights to expose and examine society’s foibles through mockery and ribald jest.

As a god whose cult was popular amongst women and slaves, Dionysus continues to magnetize the disenfranchised and those seeking to shake up existing systems of power. Today he’s the Regent of Raves and all things alternative. Perhaps he’s relaxed our attitudes towards the use of psychedelics and ketamine to assuage clinical depression. Dionysus’ journey can be an archetype for LGBTQ+ youth who seek an unequivocable “place at the table” with the rest of the family.

Banished from his rightful home, hidden from and hounded by Hera’s disapproval, Dionysus surrounded himself with a feel-good squad, a “logical family” in lieu of a biological one (to paraphrase Armistead Maupin of “Tales of The City.”) On hearing that his nemesis Hera was imprisoned by a magic chair, our god of theatre dropped the mic with a brilliant plot twist. Dionysus returned to Olympus to LIBERATE her, getting the old girl unstuck. Zeus embraced Dionysus in gratitude, making his son the last, but not least, god to join the Olympian pantheon. Never forgetting his past, Dionysus rescued his mortal mother Semele from Hades and brought her to Olympus where she became the goddess Thyone. Today, Dionysus is our myth and his magic is LOVE!

We have 753 guests and no members online