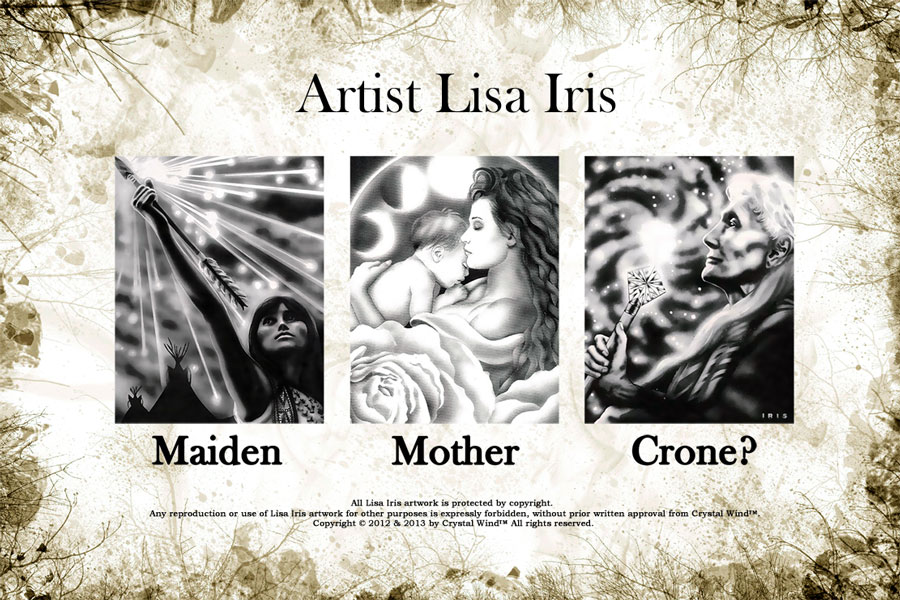 Am I alone or are there pagans “of a certain age” who find the term Crone absurd and demeaning? Is a tripartite definition of the Eternal Feminine too simplistic? Is the transition from Mother to Crone too abrupt? Is there something (like life) in between?

Who’s making this stuff up?!

I respect the Crone as a symbol for wisdom and the fruition of life’s journey. The publications, ceremonies and websites that celebrate the Crone are inspiring, but call me a crone if you want a black eye! How can I identify with a negative stereotype that persists, regardless of our efforts to reclaim it? 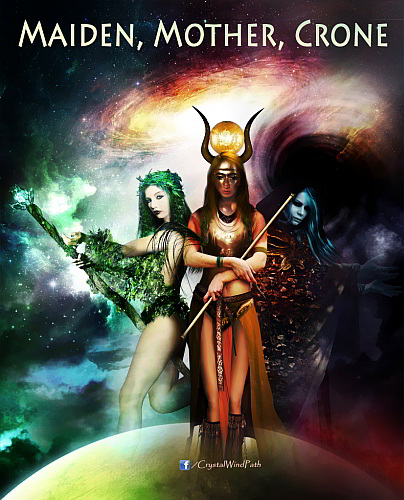 In the minds of most people, the word Crone conjures the evil, ugly witch from a medieval, papal playbook.  Her name, derived from the Old North French carogne, means carrion. The Crone is woman’s fear of aging: to become asexual, ugly and reviled. The Crone is man’s fear of impotence: the revulsion that portends his own inevitable aging and death. Even in folklore, an age/gender bias exists: the Crone has no male equivalent. The old man of magic is no mere elderly witch. (Sorry, warlock means oath breaker). He mysteriously graduates to Wizard - a master of the occult arts. He is often a teacher or mentor, unlike the Crone who curses, poisons or devours the young. The Crone seems a raggedy, root-digging dilettante compared to the Wizard, whose company and council is prized by kings.

Even when the Crone is favorably portrayed - as a trusted seer, herbalist and healer - she’s strangely exiled to the fringes of society.  The Crone’s outsider status makes her easy to love and gleefully impersonate. Yet the question remains - how did a medieval trope, designed to persecute Wise Women, become something I’m obliged to embrace?

Of The Triple Goddess,  I ask three questions.

If Grandmother or Elder lacks invocative power, imagine The Rider-Waite Tarot’s Ten of Pentacles depicting a different gender. Behold the Matriarch, enthroned, surveying her estate and surrounded by family. Such love and abundance is rare in an old woman’s life. The Crone archetype lives on in the netherworld of dwindling resources, displacement and neglect. Can I get a witness for Maiden, Mother, Matriarch? It’s both an invocation and a prayer that women be cherished, respected and secure the entirety of their lives - the basis for an authentic civilization. 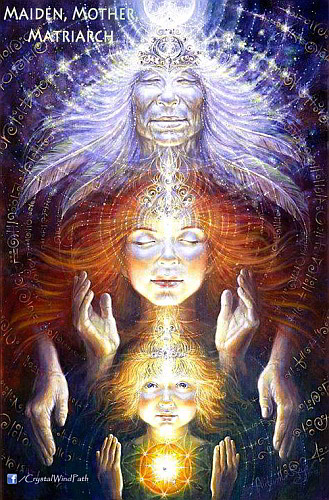 Does the word Crone relate to Goddess?  Etymologically, not at all. Cronus is the god of old age. Another god is Saturn (as in saturine), portrayed scythe in hand and known as The Bringer of Old Age. Joining Cronus and Saturn are the gods Geras (as in geriatric), Senectus (20 points if you guessed senile) and the colloquial “Father Time” who creeps in last, tripping over his beard. It’s the original old boy’s club - in a word, cronyism! It can be argued that the science of chronology is man’s invention - and that the measuring, structuring, controlling and even selling of time - characterizes the masculine mind’s ambitions.

If the gods rule linear time, wouldn’t the Goddess embody the spiral of time - possibly timelessness? Of course there are elder goddesses and goddesses with a crone aspect. Yet, if one considers the Goddess as an Absolute, the source from which all her avatars manifest, the Eternal Feminine is exactly that. Likewise, so is lateral consciousness, where life’s stages are inextricably interwoven and perceived from a cosmic overview. Where does one self end and another begin? (Heart and memory have no lines of demarcation: the elder woman remains a mother who, from time to time, sparkles with girlish charm.) The Constant Self is woman’s timelessness in the midst of change, as The Triple Goddess’ waxing, full and waning moon are cycles of the same ageless truth.

And who is The Triple Goddess?

There are many triple goddesses, but neopaganism often equates Maiden, Mother, Crone with Hecate. However, this pre-Olympian, goddess didn’t represent three ages or stages of fertility. Hecate was the Virgin ruler of the earth, sky and sea. In Greek literature, she’s described as having the heads of a horse, dog and lion.  Ancient Greco/Roman statues depict Hecate as a three bodied Goddess of the Crossroads: the threshold guardian of three directions and seer of past, present and future. Hecate wears different crowns, her hands hold different attributes, but significantly, her faces are identical, without variance in age. It’s only in contemporary art that Hecate morphs into Maiden, Mother, Crone. Hecate ruled the chthonic Underworld of the shades, prophecy and magic - but is that reason enough to equate a daughter of the Titans with the witch stereotype?

Is Maiden, Mother, Crone a tenet from a lost, matriarchal age?

You probably knew the answer before I did.  Maiden, Mother, Crone are the words of Robert Graves, best known for his historical novel  I, Claudius. In 1947, Graves wrote “The White Goddess: a Historical Grammar of Poetic Myth”, a personal mythology based on romantic conjecture. By his own admission, The White Goddess was never intended to be an academic history of paganism. Maiden, Mother, Crone was later appropriated by Gerald Gardner as part of his re-creation of the Old Ways. Please research Gardner’s claims and storied past to reach your own conclusions. In contrast to the controversial Gardner, Robert Graves was a great novelist who breathed life into antiquity. However vivid and inspired his imagination, it does not define me, any more than linear time defines the Eternal Feminine. 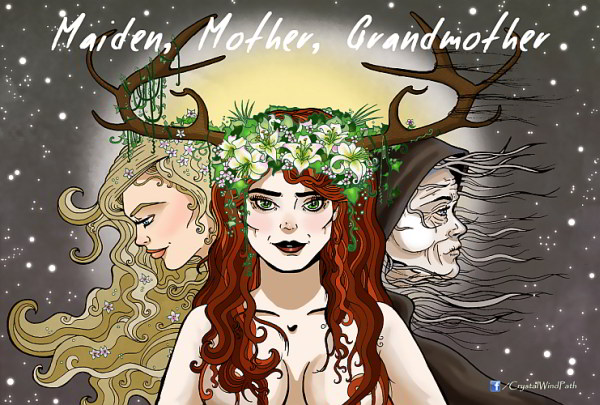 From Hoax to Hope

Popular media, including online games, is reinventing the Goddess so all of the above is probably irrelevant. It’s old news that no actual lineage connects Neolithic statues, classical goddesses, medieval witches and 20th century fame seekers and entrepreneurs, as once claimed. It’s become moot if a tradition was genuine, surmised or invented. Can we indulge in faux pagan histories (better a fairytale than nothing at all) or were our ancestral longings betrayed?

So what’s a Wise Woman to do? Perhaps reconcile human fallacy with the fact that more powerful realities exist - the magic we seek and experience. I don’t dismiss The Triple Goddess/ Maiden, Mother, Crone as a powerful and worthy symbol. My objection is to an ideological collective based on unsubstantiated claims. I object to conformity and the suspension of critical thinking. This is why I look to nature and the arts as a guide and portal.

Art enfolds the mysteries of inspiration and intuition, expressed in life itself. If we admit that we’re making this up as we go along, then we’re guided by the poetry within, not by dogma imposed from without. Each of us creates our unique, mytho-poetic narratives. We’re free to choose our patron deities, the energies we work with and what we call ourselves. We’re free to release what doesn’t support us. Thus, I bid Hail and Farewell to the unfounded  restrictions of Maiden, Mother, Crone. I am free to love the Crone yet not believe in her, because we’ve never met. Instead, I encounter beautiful, vital and extraordinary women of every age.

Summerstorm (aka Lisa Iris) is an artist whose paintings are featured in The Crystal Wind Oracle App by Antonio De Liberato, available on the Android Market and the Apple App Store.
More info at www.crystalwind.ca 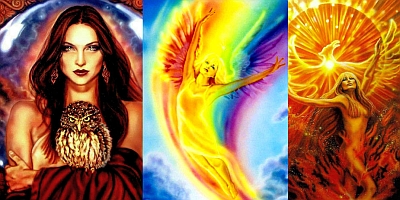 You can see the amazing art of Lisa Iris at her online gallery: www.lisairis.ca.

Visit her Fan Page at https://www.facebook.com/ArtistLisaIris

All Lisa Iris artwork and text is copyrighted by the artist and may not be reproduced by any means, electronic or otherwise, without first obtaining written permission from the artist's agent, Crystal Wind™.  Agent can be contacted at