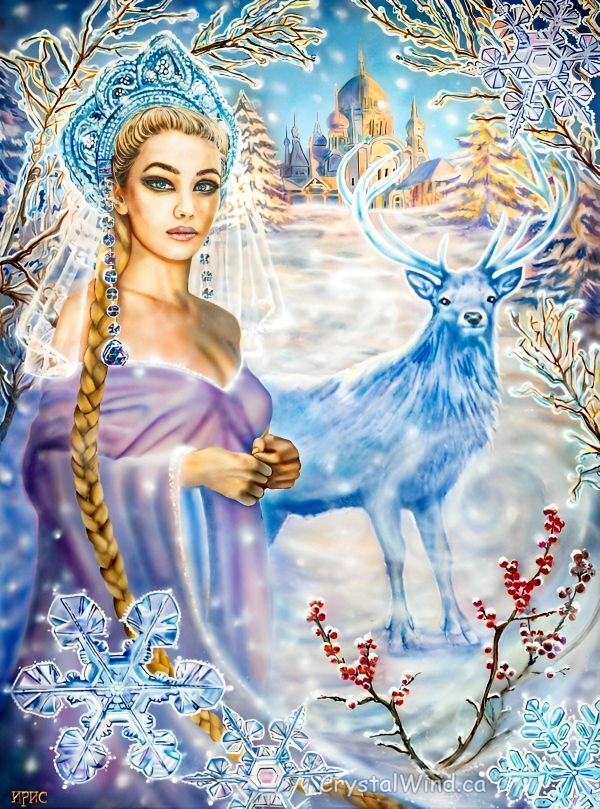 At a time of war, during a season of “Peace On Earth,” it’s natural to reflect on how a country’s people, and their silent heartfelt prayers, are separate from the leadership that controls and misrepresents them. The following myth is shared with the hope for peace between Russia and Ukraine, and that parallel cultures need not be politicized, fragmented and lost.

Every Christmas in Russia, a legend comes to life. And until recent times, this has been an innocent and magical time in Ukraine as well.

As if stepping out of a fairy tale, beautiful girls appear in town wearing white trimmed blue robes and embroidered caps. They also wear the traditional Kokoshnik, an ornate headdress dating back to 10th century Novgorod. These damsels glide through shopping centers, events, parades and photo-ops. They appear on the doorsteps of fortunate homes, at corporate events and at orphanages with baskets of sweets and toys. Smiling and waving, they confirm the promise of a happy New Year. They all represent Snegurochka, The Snow Maiden.

With her long blonde braid and magical mien, The Snow Maiden could be mistaken for Elsa, but Frozen’s Let It Go Girl is a Janey-come-lately. The Snow Maiden became a cultural icon 140 years prior, immortalized in a play by Aleksandr Ostrovsky (1873) and an opera by Rimsky-Korsakov (1882).

To even see the Snow Maiden is a triumph of good will because she, and everything else Christmas, was banned in 1917 by the Bolsheviks, after the Russian Revolution. In 1935 the government relented, allowing her, her grandfather and a tree inside the home, to return as part of a secular New Year’s Festival. Christmas became a legal holiday in 1991, celebrated on January 7th (by the Orthodox Julian calendar).

The Snow Maiden’s grandfather is Ded Moroz, or Grandfather Frost, that legendary outlaw also banned in 1917. He was believed to be too bourgeoisie, too capitalistic by Soviet authorities, because of his striking resemblance to St. Nick. (In fact, Ded just recently began wearing red robes, as well as the traditional blue). Here the resemblance ends, as Ded is primeval compared to Santa, as his origins are the Slavic snow god, Morozko.

The Snow Maiden and Ded Moroz live in Veliky Ustyug, a small town outside Moscow with a post office dedicated to answering children’s mail.  This duo delivers gifts travelling by troika, a sled pulled by three galloping horses. The Snow Maiden isn’t along for the ride as a mere ornament or Santa’s helper. She’s an enchanted being of folklore, commemorated on hand-painted Matryoshka (nesting dolls) and exquisite lacquered boxes. Her ill-fated life amongst mortals is a story of love and sacrifice.

The Snow Maiden was born to Mother Spring and Father Frost. Her parents took pity on an elderly and childless couple who lived in the woods. They gifted the poor couple with their otherworldly daughter. The Snow Maiden devoted herself to her mortal parents, staying indoors and bringing joy to their humble forest home. But more and more, she was drawn to the faint echoes of village life nearby. The sound of laughter and music led her to venture out and seek the company of other youths.  A young man, Lehl, captured her attention. The Snow Maiden begged Mother Spring to give her a heart, so she could be like other girls. And so, finding herself at last in Lehl’s arms, the Snow Maiden evaporated into a shimmering cloud. Love made her human, and so, she melted.

Other versions of this tale describe her coming to life after being built by her elderly parents, who gave her two blue beads for eyes and red yarn for a mouth. This brings to mind the Germanic myth of the Schneekind, or Snow Child. Other variations of the Snow Maiden describe Mother Spring giving her a Love Wreath, or that she was melted by jumping over a fire, while playing with village girls. Accordingly, there’s an ancient Russian tradition of burning a straw figure on a bonfire to invoke the change in seasons.

What remains consistent in the story, is how everything changes when an icy heart gives way to love. In giving love, we give our lives. The Snow Maiden’s farewell ensures the crocuses’ bloom, just as Winter heralds her return.

from “Snegurochka” by Aleksandr Ostrovsky

© 2022 crystalwind.ca. All rights reserved. Unauthorized copy or posting on other websites is prohibited. We track all IP addresses with sniffer technology. Using a Proxy/VPN will not hide your IP address.