The New Moon on Friday, August 30, 2019, at 6 degrees Virgo joins Mars, the planet of strength, courage and sexuality. Mercury and Venus are also close to the new moon which reigns in the aggressive side of Mars. It helps you get in touch with your most passionate desires and share them.

The August 2019 new moon is the best moon phase in a very long time for starting something new or reenergizing something. It is especially good for romance so you could find your true soul mate or reinvigorate a marriage. The new moon in good aspect to Uranus which adds excitement and positive change.

The August 30 new moon at 06°46′ Virgo is conjunct Mars by one degree as shown in the chart below. This alone makes for a very strong moon phase because Mars rules strength, conjunctions are the strongest of planetary aspects, and the aspect orb of one degree is very strong.

Mars is generally considered a malefic planet, being aggressive, combative and destructive. But this is a friendly new moon because of the loving influence of Venus and the communicative influence of Mercury. Plus, the strongest aspect to the new moon is the harmonious trine aspect to Uranus, bringing welcome change and excitement. There are no major fixed stars close to this new moon. 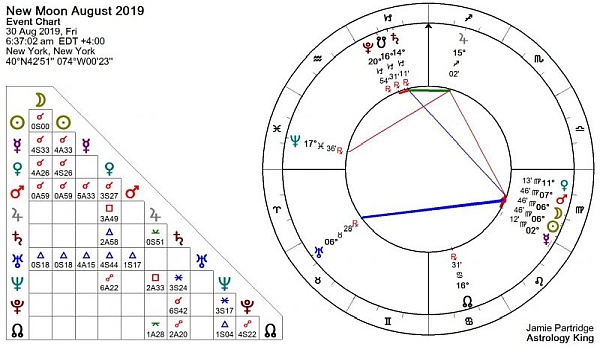 New Moon conjunct Mars brings an abundance of energy and initiative which must be used in a safe way. If this hot energy were to build up in your body, it could be released spontaneously in an uncontrolled and destructive way, hurting yourself or others.

Thankfully, Venus turns the aggression of Mars into passion and creativity, while adding love and patience. Mercury helps you think before acting and helps you express any anger through your words. A Mars new moon is good for physical activity like sport, sex, and war. Venus adds creativity like art, sculpture, and dance. Mercury brings intellectual creativity, incisive wit and debating skill.

High levels of assertiveness, initiative, and goal-directed energy make this a great new moon for starting new projects. While a Mars new moon alone would cause over assertiveness and impulsiveness, the addition of Mercury and Venus promotes harmony and cooperation. This is particularly helpful for business ventures and personal relationships.

Sun trine Uranus brings positive change and exciting opportunities. Increased freedom and self-confidence allow you to express the more flamboyant, or kinky side of your personality.

This is an excellent time to leave your comfort zone and widen your social circle with some extraordinary people. A reliable intuition and flashes of insight can lead to increased self-awareness, creative breakthroughs, and new discoveries,

Mars trine Uranus brings a sense of adventure, curiosity and initiative. You can break free from previous restriction or boring routines with a burst of daring energy. Taking risks will lead to unique opportunities to experience new activities, feelings, and relationships.

Follow your instinct and be confident about making changes and starting new projects. Your love life will benefit from increased sex drive, physical attractiveness, and open-mindedness. Internet dating could bring an exciting new romance.

The August 30 new moon is strong and sexy because it is only one degree from Mars. Venus adds affection and tenderness to the raw, primal sex drive of Mars. This perfect blend of love and sex is well suited to finding your soul mate. Mercury is also close to the new moon which helps you understand and share your most passionate feelings and desires.

The new moon, Mercury, Venus and Mars are all trine Uranus. This makes it even easier to express yourself like never before. You can confidently show the world the real you and tell people what you care about, what you love and what you really want. New moon August 2019 is excellent for making changes and starting something new. Follow your intuition and step outside your comfort zone with confidence. Decide what you really want and go for it.

The effects of the August 30 new moon lasts four weeks up to the September 28 new moon. The best time for making a fresh start and for beginning new projects is during the first two weeks of this new moon cycle. This waxing phase of the Moon lasts from August 30 to the September 14 full moon.

We have 1147 guests and no members online