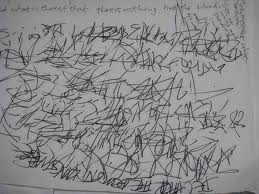 Automatic writing, a favorite tool of spiritualists at the turn of the 20th Century. You might recall this awesome scene utilizing it in "The Changeling."

Automatic writing is a tool used by psychic mediums in which they believe either they channel a spirit guide giving information/or the spirit itself OR they tap into their own intuitive aspect to have knowledge they do not normally personally possess.

There are two separate groups representing automatic writing and its methods. One group says that inviting a spirit into you to do the writing is dangerous. The other group says that you are tapping universal (akashic) knowledge. I am personally of the latter. The information I get is very much the same as when I do a psychic read on an object. I am ever present within me that there is knowledge I am tapping, but not lending my body over to anyone. I am simply going on autopilot and spitting out the words of someone who once lived. If people are of the former group, there are protections they will want to learn before doing this process. It can frighten some to be "not present" for a time and then to "come to" and find writing you don't recall performing. Anyone who has been hypnotized recognizes this feeling - it's identical.

When I do automatic writing, I get comfortable. I spend some time reading, looking at photos, researching the person I want to communicate with. I then, close my eyes, pose a question, repeating it several times and then I let myself enter a neutral mental position and the writing begins. What it's like is like sticking your head outside a car window. The wind flops your hair this way and that. You put yourself in the stream and you let the stream affect your body. When the session ends (for me, it ends when my hands stop), then I look at what was written with great shock and surprise. It is wording I would never use, terms I have never heard, things that are foreign to me in writing cadence and grammar. It is foreign.

While traditionalists use paper and pen, I use a keyboard.

Here was my first attempt at utilizing a keyboard on a laptop for automatic writing. A friend was talking to me about the well respected paranormal researcher, D. Scott Rogo and his mysterious death in 1990. It didn't occur to me to do automatic writing. At first, I just did a read - got bits and pieces -

At first, I see him looking down at a white cat pacing the floor, but part of me feels that it's not literal—that's a name.

He is coming inside, pushing something with the door, out of the way, like a newspaper or letters that are lodged behind it.

I hear him say this to someone “if he has violent tendencies, why would you involve yourself with him?'

a person known from distance, only met in person recently

Then, I realized I wanted to know more - I thought about automatic writing, but since I do keyboarding about 16 hours a day, it seemed that'd be more logical. So, I gave it a stab. I sat the laptop on my lap, got in a comfy position, pulled up a photo of D. Scott Logo, studied it, asked him about his last living moments. Then, I closed my eyes, relaxed my mind and body, put my fingers in position over the keys and the typing began. While my fingers were typing, my mind was blank, just a wall of gray, nothing else. When my fingers stilled, I "came to" and realized I had a screen of writing. And, this was content that not only was in an unfamiliar style, but terms I had to look up and find out if they existed. At first, it seems like gibberish, and then the flow begins -

warehouse smerk chester silo bridges tunnel wharf pilfu zagreb forenight broth ecstasy mirrorr flock of gulls bitters once he came the valley seemed to close down. Everything was dark. There was no where to go. We reached the end of the street and then turned back. What was I going to do? Take him home with me? I had no choice. It seemed intevitable. If not tonight, some other night. Whe were rolling to a stop when I got the first sense he was not entirely whole. He was broken inside somehow. He needed his meds but asked for a drink. The conversation had been interesting. I was curious to see where it went. We both wer of a customary curiosity about the other in a physical sense, but the intellectual, I had to probe that portion to see if there was content worthy of my full attention. O therwise, I was just boning a shig.

As a psychic and wishing to do medium work, this is a fantastic tool, but once again it depends on the psychic and her/his attitudes about the phenomena. Like some people fear the Ouija, others find it a clever tool to access universal info. I have never had a bad experience doing this in the least. I have never been left with a feeling of being possessed or any other such feelings.

But, then, I also do not believe in possession, so therefore I never run into it.

It is also entirely possible that people, when tapping the subconscious will first spit out many unresolved issues, emotions, and other things they do not face normally. It's like going to bed at night, we face our thoughts after a day of staying busy. So, the first attempts might be more personal-related until you clear yourself of your own subconscious junk. Eventually, and especially if you practice alpha state or meditation, this opening up and being "neutral" is easier and easier.

I think automatic writing can be a very effective method and much better than trying to move a planchette over one letter at a time on a Ouija board and even better than using a pendulum for yes and no questions. This opens a conversation with information that is held by the universe; whether it is coming from a soul or simply being tapped from a life that once was, we don't know, but it really is an interesting skill and a very provocative way of gathering evidence.

Book: How To Do Automatic Writing

We have 1963 guests and no members online