The Now Of Great Change - The Arcturians

The Enlightenment - The Arcturian Council Of Light 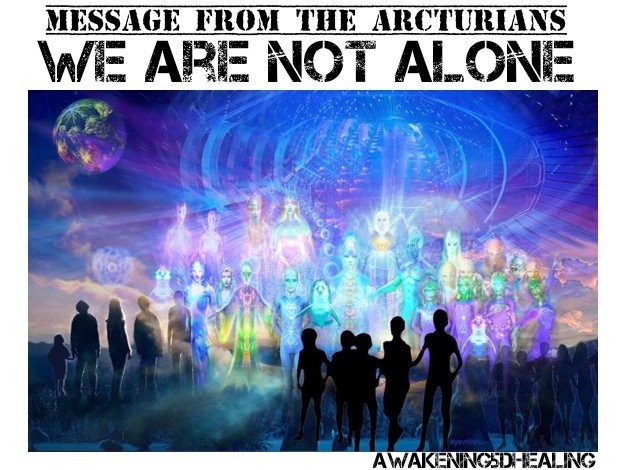 Dear ones we are looking to bring you enlightenment, to offer illumination in stormy skies. We are here as beings of light, benevolent, invested in humanity and her evolution. We are respectful of sovereignty and aware of timeline triggers that we will speak of later. Sovereignty comes from expansion of consciousness and leads to collective unity consciousness. Humanity is at a great junction, now is a time for bridge building. Redefining the boundaries, addressing issues openly, head on. There is little left to be revealed, we are now moving through a portal, a great transition from one vibratory field to another. A global case of cognitive dissonance, as you would say, is being experienced. Planetary consciousness catching up with itself. Disclosure has taken place, intergalactic visitation is real. Exposure of the cabal and their operations and motivations, lies unravelling as a the world wakes up from its stupor. Illumination.

Many are now writing, sharing and speaking of a Earth’s great shift, few deny the probability that the world is changing. Whether it is simply a matter of technological advances, climate and pollution change or something more esoteric, most recognise that everything is changing. We see this great shift in wavelengths, in swathes of colours emanating from energetic frequencies. When love fills a space we see emerald green light shimmering. When fear takes hold the energies becomes dark and shadowy. We see this on a planetary scale. We are from higher dimensional realms, we see and experience the multi verse from a quantum, holistic, perspective. Human language is designed from a linear perspective making description difficult. We see and we interpret. We look at the variables, the skies, the seas, the core and the people. We aspire to create a multi dimensional comprehension of Gaia’s transition, guiding and assisting when and where we can.

Much great work has been achieved on planet earth. Where once there were vacuums, chasms of negativity between many, now we see iridescent bridges being built. We see a people trying to understand one another. We see waves of indigo light rippling out, as third eye activation encourages spiritual enlightenment. We see green heart lights sprinkled across the population, especially in places where war and violence are a daily occurrence. Among the darkness and debris of shattered buildings and lives, we see insistent pulses of emerald light. We are once again reminded of humanities unique emotional depth and spectrum. The lizards are retreating to their lairs, avoiding the glare of the coming Lunar Eclipse and Blood Moon, a torch on their dark deeds. The snake will eat its tail before the year is out.

We understand specific incidents are triggering outpourings of powerful, intense emotional energies. We see oranges and violets, sacral chakra purging, a mass cleansing from the poisons used to control humanity. The violet lightwaves are beautiful, stretching across your oceans, as humanities consciousness expands. We speak of timelines, proportionality, upgrades and free will. We speak of choice, of oppression and intervention. We speak of cosmic rules of engagement, intergalactic communities, dark and light, energy and frequencies. We speak of realms, of dimensionalities, and choice. The anunaki have long infiltrated your planet and species. Their motivations are rooted in the fourth dimension with a conscious commitment to invade and rule the third dimension by inhabiting organic bodies. Planet earth is one of many targets, or victims, of their mission for chaos and destruction. They look for planets with resources, rare and valuable in the galaxies. They are an anomaly of nature or the yin to the yang, essential for balance and choice.

It takes a powerful catalyst to wake up a world. For many Donald Trump has fulfilled this role. The process of understanding him has forced many to open their eyes and see the structures underpinning their lives that control them. As one individual he has fulfilled this role, this mission, exceptionally well. Uniting millions in causes close to the evolutionary heart of humanity, he has triggered rEvolutionary momentum. Donald Trump was never meant to be the solution, he was always the Catalyst. The solution is being found every day. Solutions to the planet’s pollutions, energy requirements, sanitation and health needs. As the older world awakens, the indigos, the rainbow children have been busy changing the world. They have been working on solutions to problems created by the cabal. Solutions created by changing needs and technological advancement. Planet earth is coming under new ownership, ownership by the people, not a small number at the top of the pyramid. Her beauty, her wealth of resources, her diversity and history have long drawn visitors from far and wide, many of whom are here now watching as we do, guiding and supporting the great shift.

Enlightenment will bring with it solutions. The rainbow children will redesign your world. Lightworkers and healers will reenergise and heal your world. Transmuters will clean your world of dense karmic energies. Cosmic celestial intervention, Gaia’s soul tribe, assist in her ascension to fifth dimensional realms. Love is the frequency of the fifth dimension and higher. Without love pulsing through our being the fifth dimension will remain a story, a tribal tale of dreamstate, inner stillness, shamanic wisdom and beauty. Love is the key to the gates of the fifth dimension. Fear will keep humans locked into lower dimensional frequencies, the fourth and third dimensions. There are angels and demons fighting a great battle in and around Gaia. Their battle is in the fourth and third dimensions. Dark workers have no resonance with the fifth or higher, no wish to ascend or embrace inner peace. Their choice is chaos, violence and the pleasures of the third dimension. They choose their path, as we all do.

We speak of realms of existence. To try and help you understand that there are many planes of existence, many lifetimes being experienced. The world is complex, time loops, it spirals and dances. We cannot predict for there are no clear paths ahead, no easily readable timelines. Everything is fluctuating, changing, shifting. We would like to share with you a high proportion of timelines indicate Donald Trump has played his part, his mission is accomplished. Unification of people, raised awareness of connectivity, responsibility, community and collectivity. Greater understanding of the ways misogyny and racism control the lives of many. Conscious recognition of the ways the elite control mainstream media, news and political strongholds. All of this is the Enlightenment. The history books are recording this time as the true age of enlightenment, a time that will change humanity profoundly.

There is still potential for separation, Gaia in the lower realms, and a Gaia in her lightbody in higher realms. We understand this vision of heavens and hell has long permeated human consciousness and may well be close to the overall outcome of cosmic transformation. We also recognise there is still the chance for holistic evolution. The lights that spark and twinkle across Gaia shimmer rainbow colours of awakening, activation and expansion. It is magical and beautiful to behold. The darkness is breaking up, dense areas are thinning, lightening, as more people upgrade, integrating lightbody codes. The vibratory fields rise to light. We are in awe of those who have chosen to participate in this great shift, we see your warrior lights dotted across the globe. We see the strength, the power and the belief in your lights, we thank you for your continued lightwork. We are here always to reassure you no nuclear devices are permissible on planet earth, they will be disabled. This decision was made by the Intergalactic Federation of Light, unanimously. Nuclear war is an empty threat in a covert war of light and dark.

Light codes activate your energetic being, kickstarting expansion of consciousness through your chakra systems. Current cosmic upgrades are activating third eye, throat and heart chakras. We see people finding their voice, exercising their right to a say in the direction of their lives. We see love battling fear every day. We see multi dimensional soul tribe, guides and angels reaching out to protect and guide those walking upon Gaia. We thank you. We urge you to continue to communicate with each other, to build bridges of love, learning and wisdom. We see that we can be of assistance and remind those who resonate that by inhabiting love vibration and asking us, the Arcturian council of light, for protection, we are able to envelope each being in lighter frequencies, a shield of love. We are from peace and we bring peace in our hearts for all of humanity. We send love, light protection and healing to all those who resonate with our words. Peace warriors of light, warriors of Gaia and warriors of love, peace.

What Will it Take to Get You to Shift? - The 9th Dimensional Arcturian Council

Message From Spirit - The Power of Gratitude

It Is Time To Believe - Teachings of the Masters

We have 1665 guests and no members online