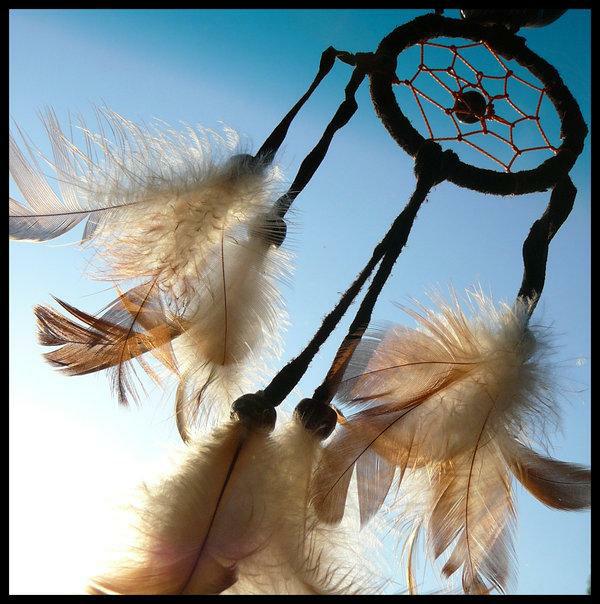 For hundreds of generations, certain elements of Native American peoples' spiritualism have been, and continue to be, handed down. One of these elements was the hoop. Some Native Americans of North America held the hoop in the highest esteem, because it symbolized strength and unity.

A lot of symbols evolved around the hoop, and one of these was the Dreamcatcher.

Using a hoop of willow, traditionally, and decorating it with findings, bits and pieces of everyday life, it is believed to have the power to catch all of a person's dreams, filtering out the bad ones, letting only the good dreams pass through.

May they also work for you...

The Legend of the Dreamcatcher

"A spider was quietly spinning his web in his own space. It was beside the sleeping space of Nokomis, the grandmother.

Each day, Nokomis watched the spider at work, quietly spinning away. One day as she was watching him, her grandson came in. "Nokomis-iya!" he shouted, glancing at the spider. He stomped over to the spider, picked up a shoe and went to hit it.

"No-keegwa," the old lady whispered, "don't hurt him." "Nokomis, why do you protect the spider?" asked the little boy.

The old lady smiled, but did not answer. When the boy left, the spider went to the old woman and thanked her for saving his life. He said to her, "For many days you have watched me spin and weave my web. You have admired my work. In return for saving my life, I will give you a gift." He smiled his special spider smile and moved away, spinning as he went. Soon the moon glistened on a magical silvery web moving gently in the window. "See how I spin?" he said. "See and learn, for each web will snare bad dreams. Only good dreams will go through the small hole. This is my gift to you. Use it so that only good dreams will be remembered. The bad dreams will become hopelessly entangled in the web."

ANOTHER LEGEND OF THE DREAMCATCHER 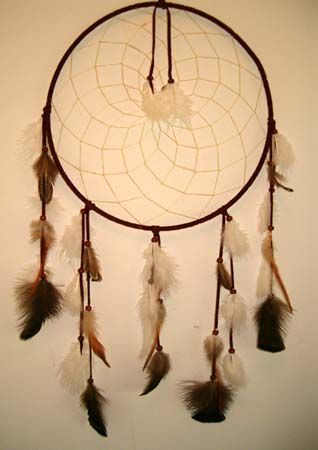 Long ago when the world was young, an old Lakota spiritual leader was on a high mountain and had a vision. In his vision, Iktomi, the great trickster and teacher of wisdom, appeared in the form of a spider. Iktomi spoke to him in a sacred language. As he spoke, Iktomi the spider picked up the elder's willow hoop which had feathers,horsehair, beads and offerings on it, and began to spin a web.

He spoke to the elder about the cycles of life; how we begin our lives as infants, move on through childhood and on to adulthood. Finally we go to old age where we must be taken care of as infants, completing the cycle. "But", Iktomi said as he continued to spin his web, "in each time of life there are many forces; some good and some bad. If you listen to the good forces, they will steer you in the right direction. But, if you listen to the bad forces, they'll steer you in the wrong direction and may hurt you. So these forces can help, or can interfere with the harmony of Nature. While the spider spoke, he continued to weave his web.

When Iktomi finished speaking, he gave the elder the web and said, "The web is a perfect circle with a hole in the center. Use the web to help your people reach their goals, making good use of their ideas, dreams and visions. If you believe in the great spirit, the web will catch your good ideas and the bad ones will go through the hole." The elder passed on his vision to the people and now many Indian people hang a dream catcher above their bed to sift their dreams and visions. The good is captured in the web of life and carried with the people, but the evil in their dreams drops through the hole in the center of the web and are no longer a part of their lives. It's said that the dream catcher holds the destiny of the future.

We have 1426 guests and no members online