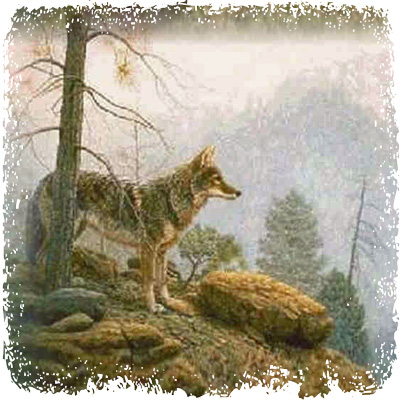 As the cub first enters the physical plane, her eyes are frozen shut and she is, in essence, blind.  Yet as she matures, her eyes open, revealing a splendid new world to explore and investigate  As her eyes turn from the gray-blue hue of youth and innocence, to yellow/gold, burning with the inner fire of experience, she becomes a fuller extension of all that she is capable of being.  She is ever changing, transforming herself throughout her cycle of life, attune with the process of renewal.

Often, the soul who has inherited the Gray Wolf as their Power Totem, is a soul who is constantly transforming themselves, improving themselves as they encounter the lessons and challenges of Life.

The Gray Wolf is constantly presented with change and opportunities for growth.  Despite all that is thrown in the Path of the Wolf however, he adapts himself to change.  To understand this, one need only look at the environment the Gray Wolf inhabits.

Currently, there are a number of gray wolves that were reintroduced in Yellowstone National Park in an attempt to bring natural balance and order back to the area.  The region covers a portion of Northwestern Wyoming and extends partially into the southern tip of Montana.

The fluctuation in season where the Gray Wolf dwells, necessitates that he adapt to change as the warm, golden days of summer when prey is plentiful and the whole pack can be fed quite easily, is replaced with the shortened days of Autumn.  The Wolf begins to grow his winter coat in preparation for the long, cold months of winter which loom over the distant horizon of red and yellow leaves.  Then, winter arrives.  The cold breath of the North winds blow across the forest and plains, blanketing everything for a time in snow that glitters like miniature crystals sprinkled by a Divine hand.  Gray Wolf searches for food with which to sustain the Pack, and always the elements, the threat of starvation, keep him on the move.  And then it is Spring once more and the welcome rays of the Sun penetrate the frozen landscape, encouraging new life.

It is said that at the door of each of the Four Winds, a wolf keeps silent vigil, each bringing change to the life of those who walk the Good Red Road, and with the change, a lesson unique to that Wind.

Gray Wolf is the Wolf who stands at the Western Door.  The winds of change will gently flow through the life of the Gray Wolf Soul, stirring her to greet the change with the knowledge of the lessons that such transitional times will herald. Gray Wolf Soul understands that Change is merely Growth, an essential part of Life, and thus, embraces Change easily.

The essence of the West Wind is Adaptation to Change through the Quest Within.  This is the land of Wakan Tanka where the individual journeys within to divine the mysteries of Soul`s Purpose in order to integrate personality with spirit.  Gray Wolf Totem stands on the cliff of evermore gazing across the misty chasm of tomorrow in quiet contemplation.  She doesn`t strain to see what is not yet visible on the other side, merely acknowledges that the changes will surely take place, and that the choices she makes, will fashion the bridge across

The complex social structure of the Wolfpack is a society that is formed with the primary intent of Survival of All.  Therefore, all pack members take guardianship of one another, assisting in the hunting and killing of prey so that the pack can be fed, huddling together to provide warmth to the very old, young or ill when the cold settles in, and guardianship in watching over the cubs of the Pack, as all members participate in the rearing and educating of the young.

The Individual with the Totem of Gray Wolf, understands the importance of protecting and nurturing Life in all of its varied and brilliant forms.  He is the Soul that desires to be of service to others and thus enters a profession which will be in alignment with these principles.  She is the soul who desires to nurture the spark of soul awareness in the other members of her society, so as to ensure the survival of the species. In whatever form this urge of Guardianship manifests itself, the Gray Wolf Totem will always strive to be of Benefit to the Whole.

Among all of our winged, finned and four legged brothers and sisters, Wolf is one of the few who mates with one for life.  Once they have "chosen" one another and are recognized by the rest of the Pack as the dominant male and female, this Alpha couple will share a deep and abiding bond that will only end with the physical transition of one of them as that mate departs the physical plane to wander the grounds of the Blue Road.  Only then will the surviving mate contemplate another to be by his/her side.

In addition to the bond between mates, the bond is nearly as strong to the other members of the Wolfpack, as each member will lay down their very life if necessary to protect another.  It is this deeply rooted sense of loyalty that reminds us of some of the best qualities within our own nature.

Wolf Soul is one who understands the depth of connection with another, be it mate, friend or family member.  These individuals will tend to be monogamous in nature.  If a mate is not found that shares this same sense of loyalty, then Wolf Totem will choose to live as a solitary wolf yet will still have deep and abiding bonds with friends and/or family.

Blending of Intuition with Cognizant Thought

Gray Wolf is known to be a skilled hunter, capable of taking down game of both a much larger size, and strength, from their own.  This is due in large part to their ability to recognize opportunity, and to intuitively know when to strike.

The hunt is initiated when keen observation is employed to select the best prey candidate . . . often one that is either weak, very young, or old.  This is the process of cognizant thought.

When the prey has been selected, a silent communication takes place as pack members fall into the intuitive dance of the hunt, moving in silent unison, sensing the thoughts and energies of both one another, and their prey.

Gray Wolf Totem is drawn to individuals who possess the ability to employ rational thought coupled with intuitive understanding.  As he walks through life, Wolf Soul uses his keen intelligence to assess issues and situations which demand resolution.  He then follows the prompts he receives from his own higher sense of knowing to achieve necessary growth and learning.