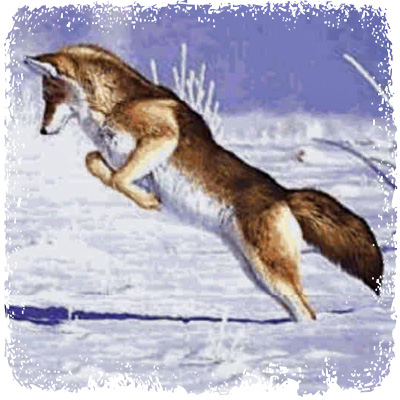 Wind: South Recalling the Child Within

Native American culture is rich with lore featuring Coyote as a central figure.  Masleca is known as The Trickster, a paradoxical mixture of wise sage and foolish prankster.

The Trickster, always carries with him, lessons that are crucial to growth and change, yet the lesson he brings is usually one that is contained within a grand joke that Coyote plays upon the unwitting human.  As such, though he is a Teacher Spirit, his lessons are taught via the vehicle of humor and wisdom found within folly.

For the two-legged beside whom Coyote walks, there will be an aspect of their personality that is deeply playful and mischievous, yet they are equally capable of deep contemplation and introspection.  Though this may at first appear to be a great contradiction, such dichotomy is all a part of the paradoxical Medicine of the Trickster that is both the Wise Sage and the hapless Fool.

Coyote souls will most often learn their lessons the hard way as they go through the Earthwalk trusting those who are incapable (or unwilling) to be worthy of such innocent trust.  Such faith in Others is beautiful in its simplicity and geniuses, yet ultimately it brings to Soul of Masleca, lessons in discernment.

The Coyote individual will often make things much harder on him/herself than they need be, and part of their Lesson as they journey around the Sacred Hoop of Life, is to uncomplicate their life and enjoy the “simple” pleasures.  For one whose outer personality is marked by a great curiosity, this can be exceptionally difficult to master as the focus tends to shift frequently and they become easily bored or distracted.  Yet if they can learn to discipline their sharp intellect, much can be accomplished.

This is not to say that they should attempt to focus only on one project until completed, but rather to find their own way of following projects through that can also appease their proclivity for multi-tasking.  Perhaps in realizing that it is acceptable to have a variety of projects going simultaneously, so long as the projects are completed, Coyote Soul can begin to “own” their success.  Often times, society teaches us that we must focus on only one thing at a time and to not veer from that one venture until it is completed.  For those who walk beside a Totem that is singularly focused (such as the Mountain Goat), this is a natural and “easy” process, yet for one beside whom Coyote journeys (a multi-tasking Totem), this is contrary to their inherent Nature.  Attempting to meet societal expectations and then “failing,” Coyote can become discouraged and lose faith in him/herself.  By recognizing that it is part of their nature to have several projects going simultaneously and combining this self-acceptance with a degree of discipline geared toward finishing those projects (even if this is done simultaneously), the two-legged with this restless Animal Spirit comes to recognize that there is nothing “wrong” with their approach, it is merely unique.

In Earth Medicine, it is recognized that each Wind or Direction possesses its own unique Medicine.  In the South, we see the Cycles of Summer and Mid-Day.  The Directional Totem for the South is Coyote with the Medicine of this Direction being that of herbs and the Standing People. Three is the Sacred Count for the South and it governs the Soul with the Powers of Trust, Faith of the Child, Enthusiasm for Knowledge, Understanding forged in the fires of Experience, Innocence and the ability to heal through the use of Herbs and Plants.  The South Wind teaches us the importance of retaining our child-like (as opposed to childish) Faith and Trust despite the adversities and challenges we all must surely face on this Walk of Life.

Observing the Coyote in his/her natural environment can be a study in comedy and drama as this beautiful wild canine endures all that is currently stacked against it to survive as the two-legged encroaches further and further into the wilderness and is becoming increasingly intolerant of Coyote’s rightful place on the Sacred Hoop of Life.  Yet in watching the enthusiasm of Coyote interacting with members of his/her family, or (as seen in the background to this page) when chasing prey, there is an unbridled and child-like playfulness about this Creature Being that reminds us all of the need to retain our joy and discovery of life.

Coyote as a Primary Totem will bring to the two-legged beside whom Masleca journeys, many lessons in Trust and Seeing through Illusion.  This can be a challenging aspect to Coyote Medicine

At heart, the Coyote individual will be an exceptionally trusting individual who will enter the Sacred Hoop with a heart that is virtually wide open and trusting.  Unfortunately, the two-legged with Masleca as a Totem Spirit begins the process of discovering not everyone is “worthy” of such trust as he/she encounters many individuals who take advantage of their open and trusting nature.

The lessons themselves may be presented in a variety of ways from lending money to a friend under the guise of being reimbursed only to be left “holding the bag” to having unquestioning faith in a romantic partner who betrays such trust in acts of unfaithfulness and/or deceit.  These will be exceptionally painful experiences that often leaves the Coyote with blaming the Self for being so “gullible.”

If the lessons represented by those painful experiences are not embraced and integrated in Conscious Awareness, the result can be a developing sense of disillusionment and the Coyote will become suspicious of even the most trust-worthy of individuals.  For those who are operating from a standpoint of automatic suspicion, partners, friends and associates who are honest and faithful, unable to operate any longer under such questioning of their integrity, will ultimately leave.  Hence, the wounded Coyote’s belief that the individual couldn’t be trusted in the first place will be reinforced and justified as it becomes a self-fulfilling prophecy.

The irony is that the Coyote individual is often very keen and perceptive, and on some level they will intuitively know those who are worthy of trust.  A subtle “knowing” will inform them of those who are out to take advantage of their nature, and they will invariably be proved right every time, yet equally that same inner knowing will tell them when another can be trusted.

When operating from the Shadow or Contrary Medicine, the Soul of Coyote will be untrustworthy themselves, weaving tales and betraying the faith of loved ones.  If this is the instance, then the lessons encountered are much harder, as ultimately the lies spoken or unfaithful acts will ultimately be exposed.  The culmination of these lessons will often result in the Coyote losing one whom they cherish until they are forced to face themselves in honesty and truth.

In both instances, when the two-legged beside whom Coyote trots can learn to listen to his/her intuition rather than what they either want to believe or refuse to see, or if they are the individual who cannot be trusted and learn to become honest and truthful,  the lesson in Trust is well and truly absorbed as Masleca learns to pierce beyond the veil of Illusion of Self and Others to the Truth that dwells beneath.

The desert Southwest is often filled with the haunting cry of the Coyote’s howl.  Higher-pitched than that of their cousin Wolf, the Coyote’s song drifts across mesas and through sandstone canyons with a song that is simultaneously mournful and wise.  It is the call of unity amongst family members sung back and forth across vast distances as a means of staying in contact.

This same song is also a rallying cry between pack members before a hunt or to chase of intruders, or the serenade of a lone Coyote in search of a mate beside whom they will journey the rest of their lives.  As there are so many circumstances in which Coyote will sing, the call has become known as the Song of Life.

The one beside whom Coyote journeys will be an individual that feels they are here for a specific purpose or “mission.”  However, the irony often is that despite this strong sense that there is a goal to be accomplished on this Earthwalk, the Coyote Soul will spend many years in attempting to discern what that special purpose is.  At times glimmers of their “destiny” will appear clearly before their questing eyes only to suddenly disappear as ensuing doubts and issues of self-worth clouds their vision.

Only through exploring many different avenues will the Coyote eventually find the Path that his/her heart resonates to, and along the way a variety of interests will capture their restless curiosity.  Above all however, the Coyote individual needs to explore and investigate as theirs is an active and inquisitive mind.  Hence, fields in which they are challenged intellectually or spiritually will resonate the strongest with them as well as a field in which they can share their insights and knowledge gained with Others.

Some professions which the combination of qualities mentioned above might be found are in the communications field such as writing or journalism, the educational field or any Role in which they are able to transmit their philosophy, ideas and ideals to their fellow Two-Leggeds.

Once the Pathway has been found, the Coyote’s soul with resonate with a sense of ultimate fulfillment as they begin the exploration of their “mission,” their voices will raise in celebration as their Song of Life rings forth.