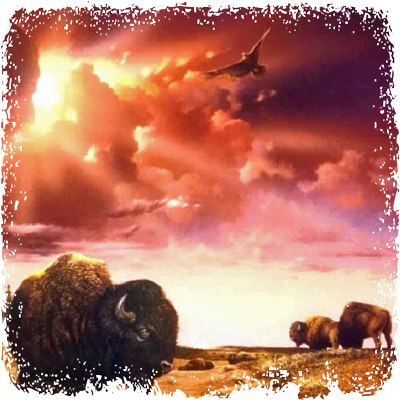 It was during a time of great famine that the mighty Buffalo came to the Sioux Nation to offer up her own life so that they might live.  She provided them with the meat with which to sustain their physical life, the hide to build their tipis and fashion warm mantles and clothing to see them through the frigid winters, and the glue and sinew needed for various instruments of necessity and worship.

It is said that when Great Spirit called upon the Animals for one to serve as the sustainer of life to the People, it was Buffalo that stepped forward and asked for the opportunity to give her physical life, so that many others might continue their Life Path along the Good Red Road.

Almost as evidence of such conscious and willing desire to be of selfless service, the Buffalo neither attempted to flee from the hunters, or to charge them in defense, though their own stature and weight would surely be no match for a two-legged.  And therefore, this beautiful animal is held in especially high honor by the American Indians, (who indeed honor all living things), for her selflessness and the abundance she has willingly provided, and for her Role in Great Mystery`s plan.

Buffalo Totem is drawn to those souls whose desire is to give selflessly of themselves from a pure and true heart.  She walks beside the one who seeks to be of service and support to their fellow Earth dwellers and as such, assists in inspiring these individuals to volunteer their time and talents to charitable causes, to the support and care of those unable to provide care for themselves, as a priest or priestess desiring to uplift the awareness that there is a deeper, sacred meaning to this life, and even as a supportive and loving friend.  In whatever fashion this desire to give of one’s self manifests itself, there is an underlying tone of genuine selflessness to these individuals as the Mighty Buffalo walks beside him/her on the Path of Physical Life.

One has only to take a look at the physical form of the Buffalo to realize that there is monumental strength contained within every muscle, each fiber of that form.  The mighty head sits upon a thickly corded neck, which connects to massive, rounded shoulders.  Though their legs appear diminutive in comparison to the great proportions of their back, shoulders, neck and head, the muscles within the legs themselves are well developed and capable of crushing nearly anything under hoof, after all they are supporting up to a ton of weight.

Buffalo Soul is an individual that has volumes of inner strength, surprising to those who may first misjudge the large, gentle eyes of the Buffalo Spirit as being one who is "weak" or otherwise "incapable," yet the contrary is true, as for one to be as selfless and giving as the Buffalo, there needs also be great rivers of emotional and spiritual fortitude.

In some instances, these waters are tapped, and known well & true, as they have thoroughly explored the inner caverns and reaches of their resources.  For those rivers of inner strength will have been called upon, to carry the personality and emotional Self through the difficult lessons that the Buffalo Soul tends to choose for their current incarnation, into the full integration and peace of mind, personality, emotion and spirit.

In other instances, the reservoir is just as deep, yet thus far not explored, due to the avoidance of facing the difficulties and choosing to escape into a world where no pain or harshness exists.  Yet this is more the exception than the rule for this particular totem, as those who have been blessed to have Buffalo walk by their side, is one who understands that all lessons are merely steps along a great Path, and although that Path may be rocky at periodic intervals, and barely distinguishable at other moments in Time, if taken in Honesty and Truth, it is the same Path that will lead them Home

Because Buffalo appeared in great number to the Sioux People at a time of great famine, and followed by the blessed visit and instruction of White Buffalo Calf Woman (will be discussed at a later date), the People became ever more aware of the intricate balance and inter-connectedness of All that the Earth Mother provides and sustains.

The Soul who has inherited the gift of Buffalo Totem, has an instinctual connection to the Earth Mother and will have a great reverence for all life.  This is one who may have walked the Red Path before, though in this lifetime, are born of a different cultural heritage.  Yet still, the Soul Remembers as it yearns to release itself from the Swamp of Forgetfulness and stand in the warm Light of Recollection.

There is a marked respect for the abundance and diversity of Nature, along with the willingness to do whatever is necessary to preserve the sanctity and sacredness of all Life on Earth.  As such, if these individuals are not involved in a professional capacity in preserving the wilderness, protecting endangered species or bringing awareness to others on a grand scale, they are involved within their own backyards preserving a wild life sanctuary where butterflies and sparrows, fox and deer are welcomed, and are vociferous to friends and family about their own reverence for all of Great Spirit`s creations.

As Buffalo Sister stepped forward to ask for the role of bringing life and awareness to the People, she sacrificed her own Physical Self so that a Greater Good, the preservation of many lives, was had.  And as she stepped across the Rainbow Bridge that leads from the Red Road of physical life to the Blue Road of the Spirit, she was greeted upon her return Home by the Buffalo Nation, the Sky Nation, and all of the Animal Spirits, the Ancestors and the Elders, who sang a song of Praise to acknowledge her noble sacrifice.

With each Animal Totem come many gifts, likewise many responsibilities.  Though there may be many sub lessons along the Life Path, the Life Lesson as represented through the Power Totem, is perhaps the greatest Lesson of all for that individual Life.

The Life Lesson for one born with Buffalo Totem is that of Sacrifice.  This can be an exceptionally difficult Life Lesson as there are so many areas open for misunderstanding and misuse, and is one that is attempted many times before it is perfected

As the true meaning of Sacrifice does not mean that one needs to be at the disposal of others to the point of being detrimental to the Self.  And yet, because these individuals recognize that they are capable of such depth of feeling and capability to give, they can be prone to give to the point of exhaustion.  This then serves no one, as water cannot be had if the river is dry.

Sacrifice is the Willingness of Heart and Spirit to serve the Greater Good, even if there is no monetary remuneration or reward of a material manner.  To put aside differences in the ability to gain greater compassion and understanding, not to give endlessly to those who gain nothing from the giving, for then one is merely pouring water through a sieve, rather than watering a flower whose petals reach toward the sun.

And therein lies the true challenge of this Life Lesson . . . to distinguish between just and true sacrifice, and repetitive attempt to gain ground where there is merely ocean.  Perhaps the sacrifice is about putting aside the stubborn pride of personality in recognizing when one must allow another to walk their own Path, and when one may walk beside another for a time.

This is the North Wind, the Direction of the Elders and the Wind of Grateful Prayer and thanksgiving.  When the soul drops the robe of physical life, and has reached the Northern Gate, an Elder stands to greet them, often in the form of the Buffalo.  The individual is welcomed warmly inside, asked to sit at the fire and tell of their walk around the Sacred Hoop.  And then, when the talking has been done, the experiences related, thankful prayer ensue with All giving thanks and offering praise to Great Mystery for the blessings and lessons of Life.  The Ancestors are honored, the Animals, the Mother Earth, the Grandmother Ocean and Grandfather Sky.  Then, the Elder spirit can then enjoy this time of great thanks and wisdom gained as he/she prepares for the next sojourn around the Sacred Hoop of physical life.