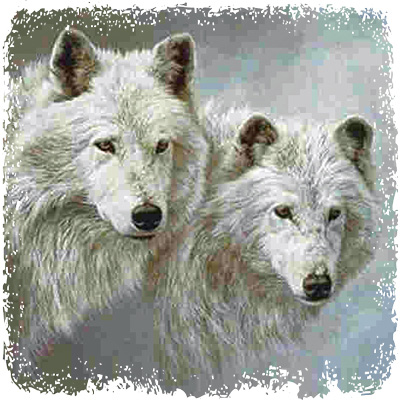 Arctic Wolf lives in a land frozen in time where, for three quarters of the year, frigid winds blow across the tundra, creating landscapes of sculpted ice.  Here, all life holds its breath while awaiting longer days that will bring the sun to gently bathe all in it's golden light, coaxing the emergence of new life to dance for awhile in its brilliant rays.  Walking across these bridges and valleys of glimmering snow, the Arctic Wolf, thick white coat ruffled in the frosty breath of the Northern wind, is in a state of contented Oneness with his surroundings.

The Arctic Wolf is the Wolf of the North Winds.  He stands quietly in rigid determination, unyielding at times, much as the barren landscapes of his home appear to resist the beginning of Spring.  She is a soul that is comfortable with her surroundings and therefore sees no "reason" to change.

Yet the promise of the North Wind is Wisdom unfolding through gratitude and acknowledgment.  This is the Direction in which Wisdom is sifted from the sands of experience and then fashioned into a Red staff of Manifesting that wields personal potential.  Therefore, if White Wolf Soul can accept change when it appears, yet remain true to his/her values, then the higher vibration of Wisdom and Truth can emerge from beneath stubborn resistance like shoots of sweet summer grass bursting forth from a blanket of winter’s snow.  Thus, Personal Power can be embraced, understood and ultimately, the soul’s individual potential manifested.

In a climate in which very little life can exist, Arctic Wolf thrives.  Drifts of snow gather in intricate patterns and shapes, castles of frozen snow glittering in the brilliant light.  Wind, cold enough to freeze exposed flesh, passes nearly unnoticed by Arctic Wolf as he roams the blinding white expanse of his territory, thick white fur keeping him well insulated . . . Mother Earth has prepared him well.

The individual with Arctic Wolf as their Power Totem is one who is capable of withstanding numerous challenges and setbacks, only to emerge stronger than before.  It is little wonder that these souls will often face adversity in their lives in order to build the resilience with which to overcome obstacles?  Paradoxically, they are also gentle souls with a great deal of emotional sensitivity . . . and this is the area in which they are likely to encounter their greatest lessons.  Yet by calling upon the inner strength and resilience of the Arctic Wolf, they can triumph and raise their heads with gratitude to the loving rays of the Sun.

The Arctic lands stretch for miles, blinding white expanses that demand respect of all who dwell there.  Upon this vista of pristine white, the Arctic Wolf roams his territory in search of food, a mate or any encroaching threat and will travel up to twenty miles a day, or more, to perform his tasks.

To withstand the harshness of the unrelenting winds, the brutality of an unforgiving and bitterly cold climate, and to do this while traversing many miles, the Arctic Wolf has been engineered with tremendous stamina to fulfill her role in Nature.

Arctic Wolf soul is an individual who is capable of performing nearly miraculous bouts of stamina that would weary other souls as she travels the good Red Road.

He possesses within him the ability to push his body and mind to the limits, and in fact, can appear to even derive pleasure from doing so.

With each new goal that has been met, Arctic Wolf individual will then set his/her sights on the next task at hand.  Preferably the new goal will be even more challenging than the one just completed, as this engenders the acknowledgment within their own reasoning that they are worthy of that which has been given to them, yet the truth of the matter is that anything they have received, has been honestly won.