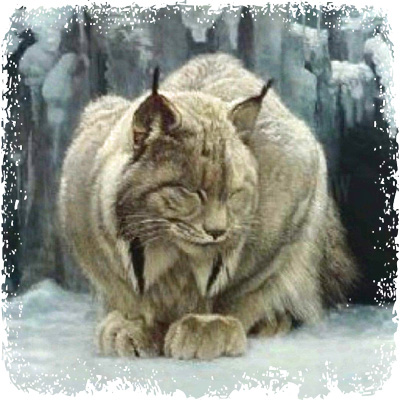 The Lynx is a beautiful member of the cat family, distinguished by its compact body and long legs, bobbed tail and tufts of fur that sprout out a the top of each ear.  Their coats are thick and luxurious in the winter to protect them against the icy winds that prevail in the high mountainous environs of their Canadian and Alaskan homes.

Across centuries and woven throughout the lore of many Peoples, the Lynx has long been recognized as a silent witness to the foils and follies of human kind, a wise and silent sage that possesses knowledge of the secret mysteries of both Heaven and Earth.  He is not the Gatekeeper to this fountain of eternal wisdom, he is one of the Totems that possess the knowledge of these secrets that other Totems are assigned to protect.

The tufts of fur that adorn the ears of a Lynx are thought to serve much like a receiver for the secret knowledge and wisdom transmitted from the Ancestors.  Like their Animal Ally, the two-legged with Lynx as a Primary Totem will enter upon this Earthwalk with a keen sense of, or interest in, the deeper mysteries of Life.

Often, the childhood is one of heightened emotional and/or psychic awareness wherein the Lynx Soul felt somehow distanced or removed from those around them.  Their gift for sudden flashes of Insight would have been noticed at a very early age, and either encouraged (if the adults in the Lynx cub`s life were open-minded or metaphysically inclined individuals) or attempted to be thoroughly squashed.  As this would have taken place during that individual`s formative years, the adult Lynx may not have conscious recollection of this squelching of their psychic/perceptive insights, yet as adults, and if this has not been resolved, there will exist a reluctance to share their insights with others for fear of rejection or ridicule.

And in part, this is because the one beside whom Lynx Totem pads simply knows the deeper mysteries and secrets of Life and it is this inner Knowing that guides and directs their decisions and choices as they walk their Path of Physical Life.  They are not necessarily here to divulge that knowledge on a broad basis, unless other Totems walking, flying or swimming beside them dictate otherwise.  For example, if one were to have Power Totem of Lynx, yet have Mission Totem of Crow, then not only would Lynx provide the Knowledge of Universal Secrets, Crow would be present as Mission Totem to carry the message of such secrets to Others.  Hence, when examining ones Animal Allies, it is crucial to take the entirety of the Animal Spirits into consideration, as well as examining the Medicine and Lessons unique to each Totem.

The Lynx has been well equipped by Mother Earth to survive in climates and seasons that demand only the "fittest" will survive.  She has gifted the Lynx with a thick coat to protect against the ice and snow of a bitter winter, as well as having outfitted this graceful creature with large paws that serve much like snowshoes that keep the Lynx aloft on drifts of snow, in order that he/she may easily chase the fleet and sure-footed snowshoe hare that is the primary source of the Lynxes` diet.

It is the ability of the Lynx to blend in with his/her environs and move silently and swiftly across varying terrain, that are the primary factors in this cat`s ability to approach prey nearly unseen and unheard.

This beautiful animal is a species soon to be threatened with extinction, and hence is awaiting a listing on the endangered species list, so encounters in the wild in this current age is, tragically, highly unlikely.  Equally, these illusive creatures have always been difficult to catch sight of due to the fact that they have an uncanny ability to slip unnoticed long before a human has the opportunity to realize they were even present.  The Lynx however, will often observe the two-legged with a mixture of caution and curiosity, staying hidden in bushes, shadows, or any other form of concealment that is available.

This ability to move so silently and pass unseen was noted by indigenous peoples who understood the Medicine of the Lynx to be one of slipping effortlessly between planes and dimensions.

For the Two-Legged with Lynx as a Primary Totem, there will exist the inherent ability within these souls to uncover all that which is "hidden" from the eyes of a less observant individual.  This is not necessarily an immediate or intuitive sensing, but rather a gradual process of uncovering hidden corners and shadows through silent observation, much as the Lynx in the wild will quietly observe prey, trespassers into their territory and potential mates.

Lynx Soul will be able to see right through the outer appearances and what Others might chose to present to the outside world, to the very heart of all that is Hidden beneath.  This means that the one beside whom Lynx pads will have an uncanny ability to recognize the fears, secrets, agenda and feelings of guilt or remorse that are all but invisible to most other souls.

There are other Totems (such as Black Panther) who possess the ability to see into the hearts and minds of their fellow two-legged, yet where part of the Black Panther Soul`s Medicine is to point these areas out, it is not the Medicine of Lynx to do so.  Lynx Souls merely uncover the hidden and store the knowledge away, perhaps transmitting this knowing to the one whose hidden feelings and thoughts he/she has successfully uncovered telepathically, yet they remain silent on these things until such a time that they are approached for "assistance."

Even then, the Lynx soul is very cautious about how much is revealed or shared of their Inner Knowing, as they are not here to point these areas out to Others, nor does this knowledge necessitate they must share it, they are purely and simply the Detectives of the Animal Spirits and uncover Hidden Truths.

If there is another Totem within the individual`s Personal or Primary Totems that is a relater of such information (such as Crow), or a "counseling" Totem (such as Dolphin), then the information Lynx uncovers will be utilized for therapeutic reasons by that other Animal Ally.

The caution for the Lynx Totem however, is that the Uncovered Hidden Truths must never be shared with anyone other than whom that truth has been revealed, and certainly never used as a weapon against that soul, or as a means to exert control or power over them.  Revealing unhidden truths for such willful and egotistical purpose would be an example of the Contrary Medicine (Shadow element) of the Lynx."

Like most cats, the Lynx will spend much of its life alone, and it is typically only when the female is in estrus that Lynx will seek out a mate.  Then, once the mating is complete, the pair will part and go their separate ways, with the female raising any kittens that might be produced from the coupling.  The kittens (generally born in the late Spring months) will stay with their mother only until February or early March, when the female will once more go into estrus.

For the two-legged beside whom Lynx pads, they will find themselves alone at intermittent intervals throughout their Earthwalk, via either desire or design.

In some instances, this is a literal "aloneness" that comes with separation by either death of a loved one, or the disintegration and parting of a relationship.  Yet in other instances, the Lynx soul will feel separate from Others, even while sharing the same physical space, a trait that can often be misunderstood by loved ones.

It is not that these individuals do not desire companionship, and this tendency may be substantially reduced if there is another Primary Totem that is either Mate or Group oriented (such as Wolf, Hawk, Eagle or Dolphin), it is simply that the area of Partnerships and emotionally intimate encounters will either be a highly charged area of their current Earthwalk, or it will be next to non-existent.

In the instance of the former, the Lynx individual will meet many of his/her Life Lessons through disappointments, disillusionment or losses in love that will leave them with the desire to be alone, or feeling abandoned and rejected.  And in the case of the latter, this may either be an extremely sore spot for the two-legged with Lynx Totem, or will simply be an area of non concern.  Much depends upon the other Primary Totems that surround the individual.

Each Animal has its own Medicine which is unique to that specific Creature, as gifted by the Great Mystery.  For the Lynx, it is the Medicine of Invisibility, or the ability to slip unseen/unnoticed between planes.

This Medicine serves the Lynx to observe in silence, the foibles, follies, falsehoods and triumphs of the Human Spirit.  This information is then carried to the Elders that they may determine the course of Humanities spiritual progress.

The two-legged beside whom Lynx walks will have the ability to slip unseen into any circumstance or environment.  Once "there," they will quietly observe all that is around them and often appear either extremely shy to the casual observer, or are labeled as "aloof" and/or "arrogant."  In both instances this is usually not the case, it is simply that the Medicine of Invisibility requires the Holder of the Medicine to remain a part of the backdrop unobserved, rather than to take center stage and be noticed.  Difficulty sometimes arises when they become conspicuous in their inconspicuousness.

In some tribes, the Shaman are well versed in the Medicine of the Lynx, which assists them as they quite literally disappear into other planes and dimensions.  Yet this is a Medicine that is perfected over many lifetimes and with due work, diligence and sacrifice of will and desire to dominate either circumstances or others.

As the Ultimate Responsibility of this Medicine is to serve as a sounding board and silent, non-judgmental witness to friends, strangers, family and co-workers who find the Lynx soul to be comforting in their ability to listen without offering advice, and to offer support free of judgment.  When following this pathway of Proper Silence, the Lynx individual is answering his/her Higher Calling to be of benefit to both their fellow two-leggeds, and to serve the Purpose of the Elders.

We have 2039 guests and no members online