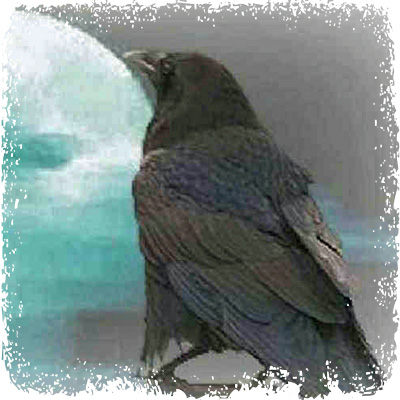 Lesson: To Understand the Shadow Within

Carrier of Lost Souls into Light

The Crow is a creature that has elicited much thought and speculation amongst all indigenous peoples and across many cultures and times.

To some, Crow is a harbinger of "evil" or portender of physical death, to others, he is one who offers the choice to fly free of the chains of the past and to soar toward self knowing, yet all seem to agree, that this Animal Totem possesses a powerful energy (Medicine) contained within his small frame.

One who has the honor of having Crow fly by his/her side, is an individual who has the Role of carrying souls lost in pain, denial, bitterness or ill intent, into the light of forgiveness and self-awareness.

When we are reeling in the darkness of emotional pain and turmoil, confused by denying that which we don`t want to see, or feeling bitter over the actions of those who have hurt us, betrayed us or rejected us in the "past," we have become lost on our Path.  It is the Role of one who has Crow as their Power Totem, to then find those lost souls and call to them to make the journey into the light of awareness, and eventually, sincere forgiveness.

For one who does not have Crow as their Power Totem (yet has lost the sense of their Life Path), it is Crow that they would call upon to carry them to re-align with their Path once more, as she is the Totem whose vision sees through the darkest of Nights to find the way back home.

Yet in order that one with Crow Totem can carry others into the Light, he/she must first find their own way free of the shadows of the past.  This can be an arduous task, yet is essential to fulfilling their Role as Carrier of Lost Souls into Light, for how can they fulfill a task that they have not yet completed for themselves?

To assist them in this process, Crow Souls have been blessed with the ability of keen perception, to see right to the core of their own Self.  This is reflected in Nature as the Crow is considered to be the most intelligent and perceptive of all Winged Ones, and she is renowned for her abilities in cognizant thought and strategy.

Whether turned within to gain understanding of herSelf, or reflected back as a mirror to Others so that they may know themSelves, this is a beautiful gift bestowed upon a deserving Soul.

All who hear the caw of the Crow immediately recognize that raspy voice.  Yet, in reality, that particular call is only one of the sounds that Crow will utilize to make a statement, call out his territory, or alert other crows to impending danger, though without a doubt, it is his caw that most two-leggeds recognize him by.

He will also make a very distinct chirping sound when he is singing in the morning or welcoming the moon into the night sky, and he can elicit tingles along the spine of the listener when he is warning others of infringement upon his territory, or of danger approaching, with a call that is halfway between a screech and a caw.

For anyone who is born with Power Totem of Crow, communication is an integral part of their flight along the Sacred Hoop of life.  They are here to express the depth of what they feel, to alternately inspire others with their vision of Life, or to transport them, through beautifully woven words, into other realms and planes of Being.

Yet for their keen intelligence and ability to communicate the intensity, scope and beauty of their own experiences to Others, Crow Soul is one who struggles to find and define him/herself to the Self.  Years, and even lifetimes, may be spent in gradually coming to an understanding and embracing of all the facets that make up their Personality, Mind and Soul.

Part of the process is in uncovering the Shadows Within that all possess along this Earth Walk.  These are the areas of our Self that represent our greatest lessons and opportunities for growth, yet can remain elusive to our grasp and understanding.  However, once these "shadows" have been fully understood and integrated, then the journey upward to the light of the Higher Self can be easily attained and serve as inspiration for Others.

To achieve this demands that one go Within and illuminate all of the corners of the subconscious where shadows still linger.  To open the door to the corridors of pain where the past still haunts the soul, and shed the Light of awareness so that true Healing may occur.  Then, Crow Soul may share his/her insight, understanding and awareness with others through words (written or spoken) in either literal or metaphorical language, that will invoke understanding and inspiration within Others to reach for the Light within themselves.

This is the Journey of the Soul from Night into Day . . . the blessing of Crow to both the  Self, and the Gift to Others.

Crows are known for their tendency to observe all that is happening around them and to alert other crows nearby at the first sign of an intruder or danger.  Their keen eyes miss nothing, and when an approaching threat is noticed, they will sound the alarm with their throaty caws echoing in the air.

It is believed that because of their tendency to call out when intruders are around, they have been given the task of being the Messengers of the Ancestors.  In other cultures and times, the belief that they are messengers of the Spirit Realm is also predominant, as in ancient Roman mythology, where a white crow was said to have delivered a foreboding message to Apollo, who then turned all ravens and crows black out of his anger at the bad news.

Like their Power Totem, Crow Souls are Sentinels who keep silent watch over all that is happening around them.  They will first observe what is occurring, making mental notes on what has been seen, heard and experienced.  They will then translate these thoughts into either spoken or written format, sharing their observations with the world around them.

In esoteric astrology, the Crow would be considered to be much like Saturn, the Gatekeeper, who stands ever at the ready of the Doorway between Planes, keeping the Ancestors informed as to the progress and evolution of those who walk the Red Road.  Yet Crow will also carry messages from the Ancestors to his/her fellow two-leggeds.  This has earned the Crow Soul the responsibility of being the Watcher and the Sentinel, standing as a messenger between the realm of the physical, and the realm of the Spirit.

If Crow is not your personal Power Totem, yet has suddenly made an appearance in your life, then there are messages that the Ancestors are bringing to you that will likely be heralding significant changes in your life.  The more crows that you encounter, the more likely the message is to be urgent and needing your acknowledgment and attention.  Take the time to quietly go within, asking for clarification on the Message being delivered.  Or it may be that you will be called upon to assist others in their journey from the darkness of denial into the light of awareness.

If Crow is your Power Totem and you are suddenly noticing him/her all about you, it is a time to go within, immersing yourself in quiet contemplation, listening to the messages you are to pay heed to for either your own Path, or as a message to relay to Others.

Several creatures of the Earth Mother are believed to have been given the Gift of Shapeshifting, that is transforming from their animal state to that of a two-legged, and back again.  Amongst these Beings who are said to possess this ability is the Crow.

It is said that the Elder Spirits will appear before a two-legged in the form of a Crow so that the strength, character and faith of the mortal can be tested prior to receiving a special gift or honor.  For this reason, Crow can be clever, attempting to trick the two-legged into folly.  If the two-legged passes the test, then the Crow will transform his shape and appear before the mortal as an Ancient One, who will then deliver a message of great importance, or bestow an ability upon the one who has triumphed in the face of challenge or adversity.

One who flies with Power Totem Crow, is an individual blessed with great Insight.

This ability to see to the very heart of a matter, serves the Crow Soul well as he/she traverses the Earth Walk.  With the keen perception and ability to grasp complex ideas and philosophies (initially on an intuitive level, followed by deductive reasoning), one with Power Totem Crow may transform the direction of their Journey, their belief system and understanding, indeed their very Life here in Physical.

More often than not, one whose Soul shares a deep bond with Crow will be an individual who may experience an especially difficult early life, wherein a certain sense of detachment or "dis-connectedness" to other two-leggeds has been felt.  This general sense of not belonging will exist on some level, and at varying intensities, throughout their physical life, or until a deeper level of understanding and acceptance has been attained.

Perhaps it is because, like their Animal Totem, they exist simultaneously within two worlds, that of the Spirit and that of the Flesh, that these individuals always seem to be looking for the answer to all of their questions, and ultimately, a sense of `connection.

Yet the true thirst for connection comes from the Soul of Crow desiring to re-connect with all that was once known, yet lost when the Soul is cast upon the blank shores of forgetfulness that is Physical Life.  He/she seeks to connect all that which was known, is now known, and will one day be known, thus perhaps receiving the Answers to all of the Questions which fill their active and pondering minds.

When one with Power Totem Crow comes to realize that he/she is already connected to that vast repository of Universal Knowledge, and that the Earth Walk is the "schoolroom" of that great university, then, the process of transformation begins.  This leads him/her to the discovery that one is never truly dis-connected in the first place, merely walking on a different level, plane or experience than some of the other two-leggeds.

Once this realization has been made, then Crow Soul will begin to Shapeshift from the bindings of the past, which have dictated that there must be something "wrong" with his/her way of experiencing, feeling  or viewing Life, and can instead, come to Accept, Celebrate and Love the Self.  This is when the integrated human (mind)/crow (soul) may truly fly free.