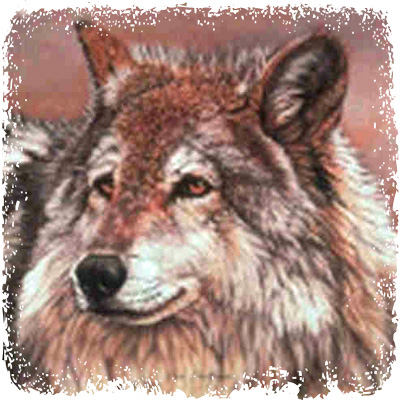 Spirit of the Red Wolf

The Red Wolf stood upon the crest of the sun bleached hill, her eyes cast across the valley spread out before her, searching, yearning to see another, such as she.  Yet none came.

Where had they all gone, her Brothers and Sisters?  This valley had once rung with their sweet music, washing across the rolling hills and nestling into the dips of the valley like gentle ribbons of morning mist, vibrant and alive.  Now . . . the silence was thundering.

As she turned toward the setting sun, her eyes caught the sight of an approaching wolf.  Red Wolf`s noble heart leapt in joy.  Then she noticed this Wolf was unlike any she had seen before.  The approaching figure was larger than any other clan member she had known, and all about his reddened fur, was a white light that glowed and pulsed like the fading sun.

Then, as the Other One raised his head and called to her, she knew . . . she was returning Home to where her Brothers and Sisters would greet her with howls of ecstasy and joy.

The Red Wolf is now considered to be extinct in the wild, having been slaughtered by humans and robbed of their natural resources by the encroaching spread of the two-leggeds.

In 1973, the US Fish & Wildlife Service garnered protection for the Red Wolf with the passage of the Endangered Species Act.  A captive breeding program was then successfully initiated to bring back the Red Wolf from the brink of complete extinction, and thus today, the population of Red Wolves has reached the near 300 mark.  Perhaps through the awareness of, and the due respect of this beautiful creature, we can prevent what would be a tragic demise of a splendid and wise fellow inhabitant of Earth Mother.

The individual who has been blessed to have Red Wolf walk beside him/her as their Totem, can expect a life blessed with abundant change and, hence, tremendous growth, as this is the Wolf that stands at the Southern Gate.

Growth is often initiated for the Red Wolf with unexpected events catapulting the Red Soul into action.  She does not assess the change in logical, controlled movements; rather she approaches these changes with instinctual timing and instantaneous decisions that lead her exactly to where she needs to be.

If Red Wolf Soul can tap into her ability to elicit positive change and growth in this life, then the full potential of her ability to Create Positive Change will be manifested.

The heart of the Red Wolf beats strong as he gazes into the eyes of the prone female, listening to her faint cries and whimpers.  His mate is dying, her physical form writhing with the currents of pain that assault her and he, Alpha male of the last surviving wild red wolf pack, is powerless to help his beloved.

Finally, the transition comes and he watches her form go still, watches as the air leaves her lungs and her chest sinks back, then watches as the sparkling mist of energy leaves the body and feels her as she moves through him on her way to the Blue Road of Spirit.

Sensing their pack leader`s grief, the other pack members gather beside him, eyes cast at the lifeless body before them as they huddle close to comfort him with their presence.  Then, on some silent cue, they all raise their heads and sing a song of temporal parting to a friend, and a song of comfort to the one left behind.

The individual with the Soul of Red Wolf is one who is profoundly compassionate, sensitive to the pain of others and will do anything within their ability to alleviate suffering.  As such, these individuals will often be found in the healing professions, either in terms of "medical professionals" or as energy/spiritual healers.

One of the greatest challenges of one who has Red Wolf Totem, is to learn that true compassion comes from knowing when to assist another, and when to draw back enough that the one they are assisting can walk the Path they have come into the physical plane to fulfill.

Red Wolf trusts that all that which she needs will be available to her, be it the prey she will eat to sustain her own life, or the shelter of the earth in which she makes her den.  She knows that Nature is Kind, Loving and Provides.  She has belief based upon experience that tells her her pack members will defend her if/when needed against attack.  She gives love and receives love with the acceptance of one who has known no rejection, no judgment and no fear . . . she is the essence of Innocence.

Red Wolf Totem walks with one who operates from an innocent heart, and thus, the individual blessed with this Totem is either born with an instinctual innocence, or they have come into this lifetime with one of their key lessons being that of maintaining, or re-kindling, innocence.

This is where they facilitate their primary Role of Teacher, to teach others the humbleness of Innocence, the gift of Belief and Trust.  Yet in order for the Teacher to impart his Knowledge and Wisdom, he must first walk through the experience himself in full awareness and facing his own personal Truths.

To do so, and then embrace others, free of judgment for the betrayals that may have gone before . . . to come back to himself with belief that all will be exactly as it is meant to be, is the returning Home to Self, it is the Return to his own Innocence.