A Message for Mankind

The Hopis believed that humankind periodically passes through great epochal cycles, or worlds. Their prophecies suggest that we are about to enter the 5th World.

We Hopi believe that the human race has passed through three different worlds and life ways since the beginning. At the end of each prior world, human life has been purified or punished by the Great Spirit, or Massau, due mainly to corruption, greed and turning away from the Great Spirit's teachings. The last great destruction was the flood which destroyed all but a few faithful ones who asked and received a permission from the Great Spirit to live with Him in this new land. The Great Spirit said, "It is up to you, if you are willing to live my poor, humble and simple life way. It is hard but if you agree to live according to my teachings and instructions, if you never lose faith in the life I shall give you, you may come and live with me." The Hopi and all who were saved from the great flood made a sacred covenant with the Great Spirit at that time. We Hopi made an oath that we will never turn away from Him. For us the Creator's laws never change or break down.

We are now faced with great problems, not only here but throughout the land. Ancient cultures are being annihilated. Our people's lands are being taken from them, leaving them no place to call their own. Why is this happening? It is happening because many have given up or manipulated their original spiritual teachings. The way of life which the Great Spirit has given to all its people of the world, whatever your original instructions are not being honored. It is because of this great sickness-called greed, which infects every land and country that simple people are losing what they have kept for thousands of years.

Now we are at the very end of our trail. Many people no longer recognize the true path of the Great Spirit. They have, in fact, no respect for the Great Spirit or for our precious Mother Earth, who gives us all life.

We are instructed in our ancient prophecy that this would occur. We were told that someone would try to go up to the moon: that they would bring something back from the moon; and that after that, nature would show signs of losing its balance. Now we see that coming about. All over the world there are now many signs that nature is no longer in balance. Floods, drought, earthquakes, and great storms are occurring and causing much suffering. We do not want this to occur in our country and we pray to the Great Spirit to save us from such things. But there are now signs that this very same thing might happen very soon on our own land." 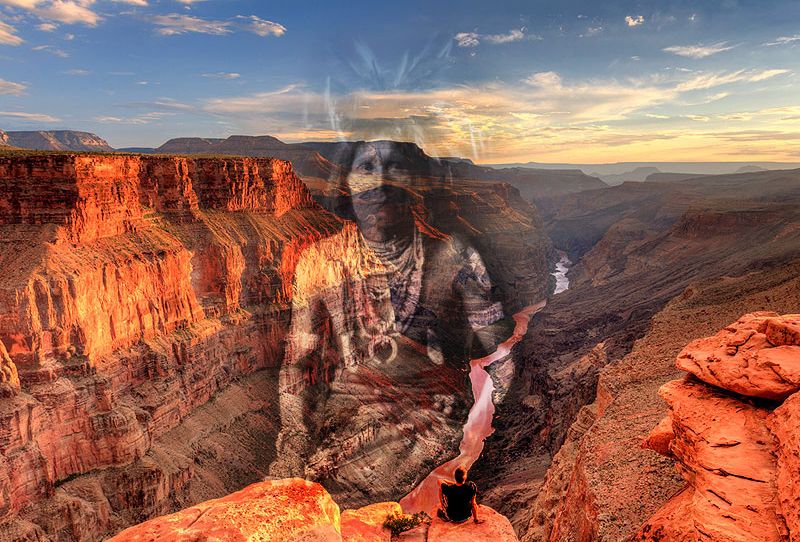 The Hopi prophecy talks of us having Four Worlds, with the Fifth World about to emerge from the ashes of the Fourth, the timing signified by Nine Signs:

These are the signs of impending great destruction, or 'columns of smoke and fire such as the white man has made in the deserts (above-ground atomic testing). Following the destruction, 'there will be much to rebuild.' And very soon afterward, The Great Spirit (known as Pahana or Massau) will return, bringing with him the dawn of the Fifth World. 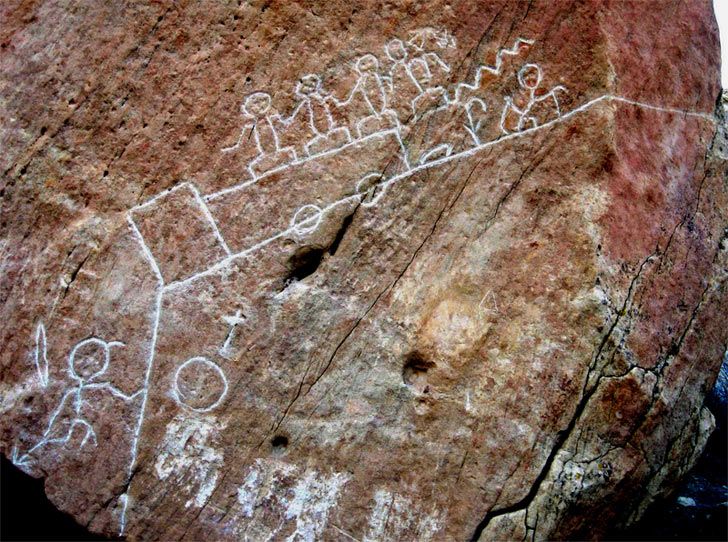 The Rock shows three half-circles that represent three world-shakings, as the Source strives to remind us of how we are all related. The first shaking occurs when man tosses bugs into the air (airplanes, first used in World War I). The second world-shaking occurs when man uses the Hopi migration symbol in war (swastika adopted by Hitler in World War II). The third shaking will be recognized by a red cover or cloak, which could point to Communist China. Hopi prophecy also says that signs of the third shaking will be:

Only by undergoing the Hopi process of Purification can we set foot on the Return Path to the One-hearted Path, and just hope that we haven't gone past that point. Purification involves a number of elements:

Repentance, or rethinking, of the Two-headed Way of Life. This involves commitment, deep knowing that we are all One, acceptance of personal power to create change, and following our inner guidance. It is good to do this in groups, because it reminds us that the whole is greater than the sum of the parts. Also, as individuals, we are so rooted in our Two-hearted ways that we need others to help point them out to us. Once we as a group have identified and committed to a One-hearted vision, we can begin to live it, first within the group, then increasingly in the outer Two-hearted world. Then like-minded groups may join together to form 'villages,' ready for when the Two-hearted Path collapses in ruins.

Sovereignty, or self-respect, and respect for the sovereignty of others. It is also about taking responsibility for our creations and good stewardship for whatever is in our sphere of influence. For example, the Fifth World view of the planet is as a partner to be nurtured rather than as a resource to be consumed and discarded. Also, wealth and abundance will not be hoarded by those whose lands produce it, but will be shared equitably. Finally, any decision about stewardship will never be short-term but will consider the impact on future generations.

Truthfulness. Confusion over 'what should be' versus 'what is' separates us from the realities of life. We look for quick fixes, Hollywood endings and the latest fads rather than 'walking the talk' and 'doing the work.' One group may import 'what works' from another group and impose it on themselves, but disharmony may result. This leads to strife, conflict, and even war. Other cultures become too complex and collapse under their own weight, thrusting the people into anarchy until new ways are found. This is the inevitable outcome of the Two-hearted Path, and we are seeing its effects now as fewer and fewer Americans believe that government is 'by the people, for the people.' Our lives float between hope and fear, unrooted in 'what is.' From the moment of our birth, we are indoctrinated into membership of our culture, with prison or asylum awaiting dissenters. We leave school, trained to become 'another brick in the wall,' mindlessly perpetuating the Two-hearted Path. The Hopi language has no equivalent of, "I'm busy," or, "I'm sorry." Busy-ness and apology are not part of the One-hearted Path; and will not carry us through the collapse of the Fourth World and emergence into the Fifth.

We've already established that a significant shift is underway in consciousness in accepting weather and climate conditions. It is no longer a question of, "Are there 'Earth changes'?"

The only questions are: "How, what, when and where?" In other words, "What is it going to look like?" and to that we have no answers.

Thank you!
ॐ Namasté - Blessings!
"Life is an echo, what you send out comes back."
© 2008-2022 crystalwind.ca. All rights reserved.
January Full Wolf Moon
Animal Spirits
American Indian Drums
Get This App Now!