The Sacred Pipe and Ceremony

The Sacred Pipe and Ceremony 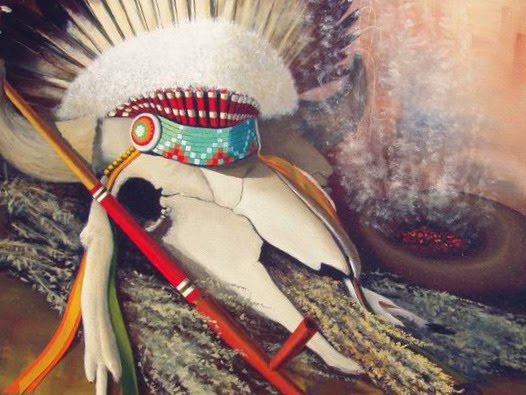 The sacred pipe and ceremony are at the heart of native people's culture, as they travel the Red Road, the native road of balance in a good way, their way, our way, the way of Wakan-Tanka, the Creator, the way of Tunkashila, the living breath of the Great Spirit Mystery, and the way of the Helpers, the way of love and freedom, here on the back of our Earth Mother. Simply put, the smoke coming from the mouth symbolizes the truth being spoken, and the plumes of smoke provide a path for prayers to reach the Great Spirit, and for the Great Spirit to travel down to Mother Earth.

The sacred pipe is a spiritual artifact, a religious altar, always to be treated with respect and care, and used only in a sacred manner. When it is put together with the stem it is sacred.

The ceremony is really very simple. The pipe is loaded with a pinch of tobacco at a time, (or a tobacco mixed with sweet smelling herbs, barks and roots such as bayberry, bearberry, mugwort, lovage, red willow inner bark, wild cherry bark, white willow bark, birch bark, and many others indigenous to a local area). The cultivation of the tobacco and the mixture preparation were the sacred responsibility of the "Tobacco Society" of the tribe, and practices varied in each area.

The ceremonial tobacco is usually very strong, the tobacco used in North America is nicotiana rustica, and usually the smoke is not inhaled, but puffed into, then out of the mouth in each of the four directions, acknowledging Father Sky, Mother Earth, and the Great Spirit as the pipe is smoked and passed from one person to the next around the circle.

The pipe holder stands holding the bowl of the pipe in his left hand, the stem in his right, pointing the stem to the East.

He sprinkles a small amount of tobacco on the ground as an offering to Mother Earth and The East. As he loads a small pinch

of tobacco into the pipe, he will say something like:

the Star of Knowledge. Yellow is for the Rising Sun which brings us a new day and another chance to learn. We thank the

Great Spirit for each day we are allowed to live upon Mother Earth under Father Sky, Tunkashila.

We pray for Knowledge, for from Knowledge comes Peace".

The pipe holder faces the South and again gives tobacco to Mother Earth, continues to load the pipe, saying something like:

"South is Black. South is were the Spirit Helpers live and black stands for the Spirit World.

We will all go to the Spirit World and we will all know one another and our deeds. We seek our spiritual wisdom

in the South and pray for help from our Spirit Guides".

The pipe holder faces the West and again gives tobacco to Mother Earth, continues to load the pipe, saying something like:

"The West is Red. West is where the Sun sets. Red is for the color of Fall and the warm wind, and the Red hoop.

While we load this pipe, we give thanks for our strength, growth, and healing that is brought forth from the West wind.

We use this as a time of planting so that the seeds may grow into a new life."

The same is done for the North:

"White is for the North. The White Giant covers Mother Earth with the white blanket of snow.

We stand here seeking endurance, and health from the North".

The pipe holder now touches the stem to the ground, saying something like:

"Green is the color of Mother Earth.

We are all part of Mother Earth, each rock, each four legged, each two legged, all creatures, plants and minerals.

We are all related. We respect our Mother Earth and protect her".

The pipe holder now holds pipe above his head with the stem up at an angle, perhaps at the Sun or Moon:

"Father Sky in union with Mother Earth are our true parents.

Father Sky gives us energy for our lives and heats our bodies and our lodges. We are thankful for Father Sky".

The pipe holder now holds the stem straight up:

"Great Spirit, Creator of us all, Creator of all things, Creator of the four directions, Mother Earth, and Father Sky, we offer this pipe to you".

Now the pipe is lit, and passed around the circle sunwise from east to south to west to north, returning to the east, each person free to offer a prayer or saying if they choose.

On completion of its journey around the sacred circle the pipe is capped with sage or bark, and separated, the stem from the pipe, set aside in its pouch until it is smoked again. The typical pipe pouch has separate compartments for the pipe and the stem so that they do not touch when not being used in ritual ceremony.

Thank you!
ॐ Namasté - Blessings!
"Life is an echo, what you send out comes back."
© 2008-2022 crystalwind.ca. All rights reserved.
Wolf Medicine
To Walk The Red Road
Discovering Your Spirit Guide
Get This App Now!