Weekly LightBlast: Foregoing Control
A+ A A- 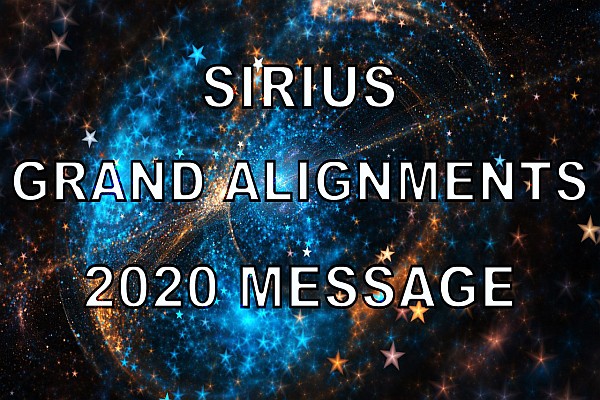 Greetings My Beloved Masters of the Universe! The following channeled message about the Grand Alignments of 2020 comes to us from Sirius.

For the energies and light frequencies which are about to enter your reality have not been seen since the times immemorial. In said times those who have occupied the earthly shores have not chosen to return to Oneness. That was their choice and that was their decision, plunging the earth into a dense state of duality eons into the past. But, the time of purification has indeed returned. For the time of light has indeed returned to bathe your planet and all of you, and your entire galaxy.

Understanding the reality of that which is, many of you have made a conscious choice to descend into the density and dissolute state of being that you have found upon your arrival on earth. Like a seed you have planted yourselves into the consciousness of earthlings, dug deep within their subconsciousness and begun to spread your divine branches. Through your continued connectedness to the divine you were able to sensitize the information that you have received and bring it through to the masses for all to partake of the changing of times.

You have done well to prepare humanity for that which is to come. You have taken upon yourselves that which has not been easy, and yet with vigor and might you have persevered in the most difficult situations.

And so, the time has come for you to yet again spread the mighty branches of your divinity, stand strong in the winds of change and begin to transcend the reality structure of your Being, bringing through the informational encodings which are being delivered into your subconscious yet again.

Since the time of your arrival, many more such seedlings have arrived on your shores and in doing so have reached the desired balance, assisting those who are yet to awaken to their true selves in realizing the truth and moving in the right direction for their souls purpose. And so, with the grand alignments coming your way, much transformation is about to take place.

For indeed that which you deem to be of the norm in your world, is not at all that which is considered of the norm outside your planetary system and the rest of the galaxy. For the normalcy, the norm if you will, is of course the peacefulness, diplomacy, understanding and love unconditional. And such normalcy shall find it’s way into the new reality of your BEing!

That is all that we have for you now. WE love you. WE are with you. Goodbye for now!

Anna Merkaba – Energy Healer- Channeler – Lightworker. To book a Healing or Pychic Session with Anna and for more channeled messages to help you on your journey to self discovery visit : Sacred Ascension – Key of Life – DISCOVER YOUR TRUE SELF THROUGH THE VIBRATIONAL MESSAGES FROM BEHIND THE VEIL
Source Here

We have 1435 guests and no members online