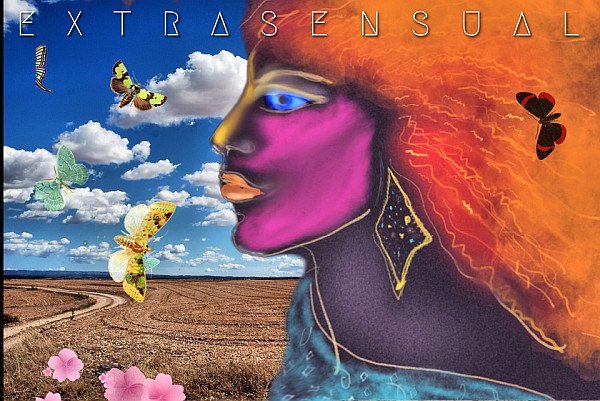 A good word to describe the experience of being here as the human and the eternal self is extrasensual.  It’s experiencing this reality as an extremely sensual being, who has access to not only the human senses but the non-physical ones.

And it’s not simply a by-product of this transformation, it’s the raison d’être,it’s the point.

Gone are the days when we could try to get away with embracing spirit as long as it didn’t involve our own sensual nature. Back when we had a modified sense of freedom because we played it safe.  We tried to keep our spirituality only in our heart and mind.  Two safety zones

But if we want to embody our own divine self, our soul, in these bodies, and in our life, we can no longer resist the sensual nature of this process.  Granted, as we become enlightened, the tendency is to want to leave this body, and this very dense and crude reality, here on Earth.

There is a feeling of drifting out of these bodies. Most ascended masters didn’t stay here very long after their enlightenment. They couldn’t relate to this world.  They hadn’t prepared their bodies to house spirit the way we are doing.

We have had such an adversarial relationship with these bodies.  We fell out of trust with them a while ago.  And then the body just kept responding to that lack of trust.  It became diseased, aged, and died.  All appropriate of course for where our consciousness was at.

So it’s a whole new thing for both the mind and the body, this integration.  It’s unfamiliar territory.  There is a major adjustment involved.  There is a period of the soul getting to know its own human aspect and its body.

It is transforming the old, carbon-based body into its original body.  Into what many refer to as the light body.  So is there any surprise there is so much resistance?

It’s the uniting, the merging and melding of polar opposites….of a carbon-based body and a limited, defensive mind with the most expansive and limitless part of us.

THE MIND HAS PTSD

The mind has been in a kind of PTSD for awhile here on Earth.  It has been battling with the heart.  It’s been in defense mode. It’s anxious.  It’s fearful, and that’s because it’s been responsible for our very survival, and has allowed spirit only a limited participation in our life.

The mind has a history of betrayals, unrequited love, disappointments, and carries a wounded heart.

But for those of us who want to stay and embody our spirit, we have let go of most of that history.  We have been creating a new heart.  One that is not wounded.  We can thank ourselves for that, because it frees us up to allow more and more of who we are into these ancestral bodies.  And into these traumatized and overly-responsible minds.

And it allows us to experience ease and grace in our life.  To enjoy this physical experience in a way we wanted to for lifetimes.

And most importantly, we had to accept every part of ourselves.  The dark and the light.  And in that acceptance, there was the alchemy.  There was the transformational energies.

TAKE THE PRESSURE OFF THE HUMAN SELF

But, don’t expect the human to do that self-acceptance all by itself.  That’s setting yourself up for more self-judgement.  The biggest challenge here is moving from the mind to the heart and soul.  From trying to make the human responsible for our embodied enlightenment, to allowing it to just unfold.

Most humans truly believe that they have fallen short.  That they are not good enough, smart enough, attractive enough, rich enough, ambitious enough, wise enough, kind enough, and the list goes on and on.

And, sadly, they keep trying to improve themselves as the human.  They spend money and energy trying and trying to be ‘better.‘

When they plug into some of these courses or books, they are often told that loving themselves more means highlighting all their so-called good attributes.  Which to a degree can make them feel better.  But the pitfall there is all of those attributes will probably be challenged, or just fall away.

And isn’t that an endless and fruitless game?

In our enlightenment, we have been stripped of so many things in our life.  Things that may have helped us to feel good about ourself as the human.  But they needed to go.  We needed to see our magnificence without the props.  Without the outside confirmations.  We needed to be in such a vulnerable place so that we could be open to our SELF.

The SELF that is wise, and confident, and joyful, and fulfilled.  That self is not the human so much, but the eternal self that we are.  That SELF doesn’t need a course in miracles or a book on how to win friends and influence people.  Or how to gain more self-confidence.

Or a course in how to create what you want in life.

So there is no point in trying to make the human a better human.   Forget the self confidence issues.  Instead it’s to just allow, as much as possible as the human, this incredible and natural process of embodied enlightenment.  It’s all being orchestrated by our eternal self anyway.

The human still gets to make the choices.  It gets to choose lack or abundance, joy or sorrow.  But it’s not responsible for creating it,

And we all know that the old, 3D joy came mostly from outside us.  And now, that doesn’t do it for us anymore, does it?  We are not so interested in how we measure up according to arbitrary outside standards.  And for awhile that made us feel crazy.

We could no longer rely on that outside standard to define us.  We temporarily felt lost, confused, and had nowhere to turn.  Many awakening are still going through that sense of loss of self.

abut, you get through that.  And then you begin to sense something else.

We sense the overwhelming joy that is our birthright. And we know the 3D joy, while appropriate, was artificial.

That 3D joy is being replaced from something real, something permanent, and eternal.  Something that can’t ever be taken from us.

And the by-products of that joy is all our human needs are met seamlessly.  And whatever we decide to partake in is so much more fulfilling, because our Self is enjoying it with us, in the most extrasensual way.  Imagine that.

We have 1315 guests and no members online