Category: Enlightenment and Teachings Sunday, 29 May 2022 Written by Cendrine 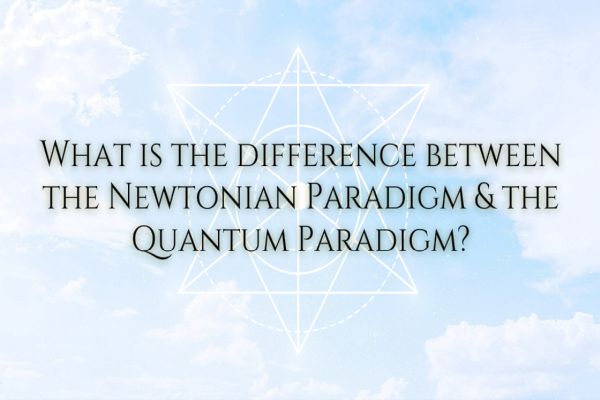 In this transmission, we will learn:

The Newtonian Paradigm thinks of the world in equations where A+B must = C.

The Newtonian Paradigm is made up of four key principles which include:

It has been wonderful for the world to experience this paradigm. We have learnt and evolved so much using these principles. Einstein was a Newtonian scientist (like most scientists for the last 3 centuries).

However, when Newtonian scientists came across things that didn’t fit in this paradigm, they would disqualify their findings as ‘woo-woo-whack’, instead of maintaining an open mind. When findings couldn’t fit into separatism, determinism and logical thinking, they would be ignored.

The Newtonian Paradigm and Logic

This paradigm is the foundation for logic that science bases itself on. The media and marketing industries also base themselves on these principles. Anything in society that wants us to believe a certain formula, ‘if you do this, you will receive that’, is operating in the Newtonian Paradigm and using logic.

Through logical formulas, they can make people believe anything! An example of this type of thinking is:

Everything that is round is a cheese.

The moon is round. Therefore, the moon is cheese.

This sounds super silly, but really, there is a lot that is based on this type of thinking. This is reductionist.

The Newtonian Paradigm has reached its peak and we have now entered the Quantum Paradigm. In many ancient civilizations in previous golden ages such as Egypt, the Quantum Paradigm was dominant. This is because the quantum is life itself. The light, God, Source, the universe, is the quantum and it is all encompassing of everything. This is the one force that does not need protecting! It simply is.

It is the network of the relationship between all things. That is the light, that is the quantum. We have always lived in a quantum paradigm, only our eyes were directed on tiny formulas based on the principles of the Newtonian Paradigm.

We needed to do this to break free from the dark ages when science became revolutionary. The Newtonian Paradigm only holds tiny keys within the greater algorithm of life itself, so it could never always stay here.

The Principles of the Quantum Paradigm

The quantum paradigm has four principles listed below. From this understanding, which we receive from quantum physics, we will start to understand more about ourselves. We will also understand the interactions with the world as a whole and how our decisions affect everything.

The Quantum Paradigm and the Digital Age

You reading this post online or watching a YouTube video, is proof that we are already living in the Quantum Paradigm. Information travelling around the world through the internet is quantum. The internet is based on quantum principles because information travels from one place to another instantly through time and space.

I do not need to be in your lounge for you to receive information from me, so this is not A+B=C logic. These are quantum dynamics!

In the Newtonian Paradigm, there is nothing but matter. There is nothing left after we die so it ignores a big part of life. It ignores the entire mind, emotions and consciousness itself.

The universe is participatory

This means that our choices, our thoughts and our words all influence our lives. Everything matters. This brings power back into our hands! This is the digital age.

So the dynamics offered to us are the digital age! Science and technology are completely interwoven with our awakening, which is so interesting. When we co-create with star races, we see that they have very advanced technology!

They learnt to use advanced technology for good. There are elements of danger and negativity to our technological age that are not of the highest. But we can choose to perceive it as a gift! We are still learning to use technology to create and support life.

This is based upon the principle of uncertainty. Scientists have observed that it is impossible to precisely measure two observables that are tied together as complementary pairs. What does that mean?

It is only when we reside fully in the present moment that we have access to our full energy! We can only imagine what resides there when we have full access to our energy. We have a huge electromagnetic field and we can feel it when we are in meditation or our flow state. When we can feel it we can increase our vibrations and our frequency even more.

This principle helps us understand the importance of being present in the NOW moment. Thinking about the past and the future depletes our energy. The past is gone and the future hasn’t arrived. But we are here now, so it is only the now that matters. If we can harness our full energy now, that energy will be reflected and create our external reality.

The universe is contextual. This means that the quantum behaviour depends on the conditions given for the experiment.

If we can think about the implications of that on our life and how we observe and create our reality, it is pretty wild!

We give meaning when we observe something. What we observe depends on the assumption that we make and the context of observation. Everything resides in the quantum.

Everything is inside of us.

When we observe something, for example, a thought in meditation, we pull it out of the quantum.

We will then observe that thought from the context of our experiment, which are our beliefs, fears, conditioning etc.

Observe the context of everything that comes into our awareness. Observe what is going on.

Quantum entanglement was observed through an experiment where two people, who were attached to brain scanning equipment, were separated by a wall. They observed that when a light was shone into the eyes of one person, it triggered a reaction in their brain. They found that the second person behind the wall had the same area of the brain light up without having a torch in their eyes.

It has been proven that a particle that has been in connection with another particle, and that now resides at the other end of the planet, will respond in similar ways even though they are no longer connected. This is pretty crazy, right?

Newtonian scientists weren’t interested in studying this phenomenon further, instead, they dismissed it as woo-woo and bad.

What we do affects others

The proof of the existence of quantum entanglement means that we can relax in the knowledge that through this principle, all the work we do on ourselves, has a ripple effect on all the people we have ever come into contact with.

We can even take this further! If all of the particles in the world that exist were once part of a big ball before the big bang in our universe, it means that we can influence EVERYTHING in our entire universe. How amazing is that?

This principle is interwoven into the previous one which we can already see with quantum entanglement.

Through the Quantum Paradigm, we know that the universe is connected. We are connected! We are connected to every particle we have ever come across. This is other humans but also includes energy which is the earth and outer space. Beyond energy and matter, information is intrinsic to the universe.

The principle of connection shows us that the most potent key to a greater understanding of the universe is information! It is not energy, matter or light, it is information.

The information I choose to give to my cells is going to go all the way to my atoms.

Our DNA is made out of atoms. So our DNA is going to open up and affect every aspect of our life, and even our future and past lives. The information I give to my cells will also affect every person that has come into my energy field and the energy field of the universe itself. The energy I give myself through my thoughts and my words does matter.

What is happening right now in humanity is the dismantling of the Newtonian Paradigm. We are shifting to having a greater understanding of the Quantum Paradigm that has always been available to us.

Cendrine is the Founder of Fractal Alchemy, 5D Quantum University, a new pathway of spiritual evolution, running online worldwide. She is also a Trance Channel to the 9D Arcturians Council, an advanced psychic and an ascension and mission mentor. She was born awake and learned to embrace the journey of self-empowerment through experiencing many contrasts in her life. She always knew she came to earth for a very special mission that would shift humanity forever. That deep inner knowing was her anchor as she experienced the many waves of living a human life in the 3D Matrix. Now, her mission templates and soul alignment are fully activated so she can share a new body of work with all her students and fellow humans. These revolutionary teachings are here to completely regrid the earth and establish the templates of the neo-humans, anchoring a new wave of human evolution in Love, Freedom, Abundance and Connection. This body of work is channeled and co-created with her Galactic team. She shares many codes in her free offerings, fulfilling her heart calling to serve millions of souls in the ascension process. The most advanced teachings are shared in her University, where she trains Light Leaders, Healers, and Channels. She is a mother of two daughters, loves exercising and swimming in the sea even when it’s very cold, chocolate and coffee, and closing her eyes, dancing in the quantum with her Galactic team, earth elemental friends and her three dragons.

We have 785 guests and no members online