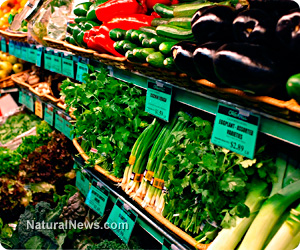 Organic food is seemingly no longer just a trend, but a necessity. A recent report by MyFox New York states that all-natural grocers can hardly keep up with the demands for organic food. Bloggers have been capturing signs that read, “Organic eggs are currently in short supply due to increased consumer demand and limited availability. This is an industry-wide shortage and is not specific to ShopRite stores or our operation.” Similar signs are being seen in grocery stores across the nation.

Cage-free, organic eggs and certain types of organic produce are among the products in shortage across the country. Experts are blaming the season as the reason for the shortage, with many Americans making good on their New Year’s resolutions to diet and lose weight. However, others are saying the secrets of large corporate food producers have been exposed, leaving consumers more apt to purchase cleaner, healthier organic foods instead.
Current demand and cold weather conditions have caused organic food prices to skyrocket. Organic strawberries for example, are being priced in the double digits in some grocery stores. While high prices can currently be seen as a downfall, overall it’s immensely positive that consumers are waking up to the dangers of genetically modified (GM) foods that are scientifically proven to cause all sorts of health problems.

If you look at the big picture, more consumers interested in buying organic should overall lower the prices in the long run, and hopefully drive GM food producers out of business. Organic food availability depends highly on your geographic location. Take Austin, Texas, for example. In most Texas grocery stores, there are more cage-free, organic, free-range and non-antibiotic eggs than regular commercially produced eggs.

GM food consumption has been proven to cause a series of health problems including cancer, infertility, allergies, weight gain, diabetes, accelerated aging, autoimmune disorders and gastrointestinal complications, just to name a few.

The first ever long-term study on GMO toxicity conducted in France and released in 2012, showed that rats fed Monsanto’s GM corn developed massive tumors and had their life spans cut significantly. Female rats seemed to be overall more affected. Similar studies are unable to be conducted in the US because of patents that big companies like Monsanto and DuPont maintain on their products. They knowingly prohibit these studies in an attempt to keep the public in the dark about the dangers surrounding their food products and the chemicals sprayed on agriculture fields.

Luckily for the consumer, information regarding the dangers of GM foods has been consistently reported in the alternative media, and now the mainstream media, resulting in a major movement advocating for the labeling of GM foods.

Today, 20 states have proposed legislation that would require food labeling. Last year, Connecticut became the first state to enact GMO labeling, and as of Jan. 9 Maine has become the most recent state to enact similar laws. However, due to the push back from corporate food giants, certain clauses have been added prohibiting states from implementing legislature until surrounding states adopt similar laws.

Last year, California proposed Proposition 37, which would’ve required GMO labeling, but despite overwhelming polls showing Californian’s support for the bill, the initiative failed after the biotech industry used sneaky and arguably illegal tactics to persuade voters into voting against it. Some question whether the votes were counted accurately.

Despite the loss, the proposition led to massive awareness and began a snowball effect resulting in many states pursuing their own GMO labeling laws. Several states on the East Coast are considering implementing similar legislation, creating a major headache for the biotech industry. GMO corporations spent $67 million alone fighting ballot initiatives in California and Washington state.

With the processed food industry searching for an out, the Grocery Manufacturer’s Association has called for a “voluntary scheme,” or the legal term, “preemption,” that would remove the states’ ability to require labeling through a federal law. Instead of the biotech industry working out a compromise on labeling, it’s asking the federal government to make it outright illegal for states to implement labeling laws. This action would essentially end all grassroots movements petitioning for labeling. Much of the original court documents are redacted; however, they’re available to view online at the end of Politico‘s report.

We have 868 guests and no members online