Getting the Doomsday Hunger? 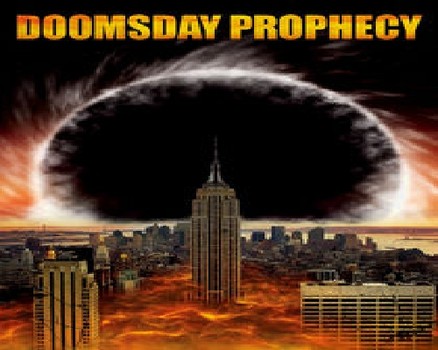 We have very imaginative and creative minds, we humans. Driving a great deal of our imagination is the desire to pick up on what’s coming, especially with regard to the biggie: survival. We believe that if we know, we can fall in line with the right action, make the right plan or choose the right religion or belief system and improve our chances, work it out or escape, or elevate ourselves up and out of a mess.

Humans don’t like feeling insecure, that much is clear. The tension of not knowing really serves to push us… one direction or another. We can learn to live comfortably with the tension, accepting it as a platform from which to learn and perceive and create the new, or in the alternative, we can take up believing in something that makes us feel safe and in the know. When security wins, we give up the journey to true information.

The collapse of the world as we know it, or as we have known it, is on all of our minds. Afraid or unafraid, we do exist within a vast range of probabilities and possibilities. Voices predicting doomsday based on prophesies, what ifs, piecing things together, simply imagining things, can be heard across the Internet. It’s quite a banquet of images.

So let’s talk about that a bit. When thinking about the subject, I remembered a video that I watched sometime in mid 2012. It featured a dignified, seemingly rational, passionate woman talking about three days of darkness that were going to occur at the end of the year.

She referred to prophesies and present day occurrences that seemed to coincide, as she described a time when sunlight would not return in the morning and people would lose their minds, leave their homes, become overwhelmed by demonic forces, break into others’ homes… wow… what a scene. She gave the dates and urged us to prepare and stay walled up inside during those three days. She said that after the three days, the sunlight would return and the world would be beautiful as springtime.

So how did I feel about what I heard? Well… I said to myself, “Nonsense… that prophesy is not meant to be understood literally.” Then I wondered how she thought people could happily walk out into a beautiful day with all kinds of dead bodies laying around. Either that’s a bit of a glitch or maybe she’s counting on ascension for the survivors.

She was so authoritative and passionate that her images of demonic shrieking outside my door stuck in my head like a bad movie. Yep, the Bible includes some fear conditioning.

As we’ve seen happen in the past, fear conditioning can have very disturbing and sad outcomes with people believing so deeply in a doomsday scenario that they actually create the scenario and self-destruct. Poison Kool-Aid for the susceptible mind. Let’s get past it.

There is a realm of all possibilities, and we really can’t expand consciousness unless we are open to infinite possibilities existing beyond the probabilities. So we are caught a bit. For open minds, discernment must come into the picture along with the feeling sense and the truth bell. We ask, ‘how does this feel’, and we take note. We listen for the ‘ding ding’: incoming information resonating with the inner truth.

Recently I happened across another video that was really interesting. This one was more of a ‘New Age based imagination’ setup. A man was explaining how he had absorbed all of the knowledge of the ancient, hidden mystery and initiate schools and he was prepared to teach it all in a five day seminar. Really!! But I kept listening as he insisted it had to be done this way… there isn’t time to do it the old way.

He went on to say that soon an event will happen that hasn’t occurred in well over 100,000 years. The event had something to do with the magnetic field and people’s memory being completely erased, somewhat like the info on a CD being erased. His course would teach people how to protect against that by building their own field… I think… as by that time I had partially tuned his message out.

Of course my thoughts went to the obvious: who would want to be walking around in a world where people’s brains had been wiped clean… geeze what an image. So obviously ascension had to be part of the plan too… just ascend out of it and leave the rest to do whatever people do without a brain.

If those two stories were the only ones we’re exposed to, no problem. But oh my dear eyes and ears… there is a glut of this kind of doomsday scenario + survival + ascension information being structured into belief systems. Obviously human imagination traveling in this direction is not new. You have to give it to people for pulling from the field of all possibilities. I guess Xenu and the Scientology spacecraft story is possible, but then again so is ‘the cow jumped over the moon’.

If people wish to believe in these structures, and the bottom line is that their belief makes them better human beings, then value can be found. Ideally, one would hope for beliefs that make the world a better place for all of us and not just the group of ascending believers.

The fear-based mass extinction scenarios are so prevalent now, with messages about comets and planets and UFOs and plans of the evil powers that we have to wonder why we are collectively projecting in that direction. Within the realm of all possibilities surely there exist as many beneficent possibilities as there are punitive ones.

Do we need to be so doomsday hungry that we create scenarios where none exist? Honestly, let’s look around. We have human-based doomsday possibilities right here. We don’t know which will occur as we anticipate. We also don’t know how the earth herself will respond and repair, or how the brave humans who are coming awake will respond and repair. All is in flux, with battles being engaged both here in 3-D and transdimensionally.

Since the future is always in flux, let’s not plant our feet in fear and determine that there is only one track in which to travel.

We can look at option #2. Split off a part of our creative imagining and let it proceed in another direction. We are, in essence, equal parts of all that is. The great source and flow of information that is divine Grace, and truth, and love, is not only available to us… we are already part of it. We do have the power to engage in our own ascension (evolution); one that is not predicated upon everyone else being ‘out of the loop’.

Let’s envision that ascension as not elitist, or exclusive to believers in one thing or another. Yes, it may include some metaphysical possibilities, but always driven by human beings in a physical world taking steps to enlighten themselves from within.

I look at it from a personal responsibility perspective as to my mind that’s the only way to transition to anywhere. Our experience of the celestial is one of profound reverence… for the purity and the beauty is astounding. We can’t imagine our own energy being the ‘same as’, and yet moving in that direction is our task. We clean ourselves up in this transformational work… that’s what we do: clean and beautify.

We may start with the most simple things, such as being kind, and respectful, and just in our dealings with others. We move on repair injustices of the past: clean slate. Then we practice being truthful and loving ourselves and others. We develop an internal honor code, which leads to trusting in our connection to the divinity within. To me, this is ascension. Everyone has the capacity to begin, from wherever they are, and grow.

And now let’s look at picking up on what’s coming: fact is, we don’t know. Even the greatest visionaries will not know the exact parameters and time frame of the events that they see. And like I said, everything is in flux. The forces at work are both us… and beyond us. Within our momentary, daily thoughts and actions we do have powers of creation… perhaps quite a lot of power as we raise our energy and expand our consciousness. So much depends upon what we believe.

Doomsday need not hang over our heads like a dark cloud. If we are empowering ourselves, raising our energy, becoming more intuitive, becoming more perceptive and connected, we are making ourselves better equipped for all possibilities. It is from a position of power and creativity that we can meet the future and whatever it brings. This power is personal and silent: not granted but developed within through honesty, courage and commitment.