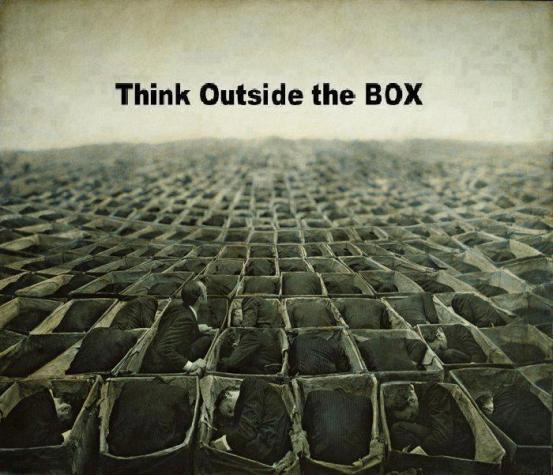 I have never fit inside a box. I tried.

At one point or another, I have squeezed my ample self into just about every box imaginable: the good girl box, the bad girl box (much shorter-lived and wildly less successful than the good girl box), the wife box, the mommy box, the divorcee box, the post-divorce slut box, the corporate professional box, the earth mother box, and on and on… none were quite the right fit.

I would constrict myself in each box only to feel unsuccessful, frustrated, and more than a little bit crazy. Most people I knew had boxes. A definition. A singular label which defined them.

I wanted a box!

A box-less life is a frightening endeavor. All my friends were boxed.

What was wrong with me that I could not fit comfortably in a single container? Why could I not find the right one for me? Was I fickle and incapable of committing to a single box for fear I’d miss a better box? Was I flighty in the same way overeager freshman girls can be, shamelessly flirting with too many upperclassmen in a desperate attempt to avoid yet another Friday night spent at home alone? Was I a frightening freak of nature who defied the convenience of the labels our culture alternately inflicts and embraces?

In all the boxes I tried, I was unable to find an easy resting place, a place to call home.

A box is perceived comfort and security. Labels on those alluring boxes sent me in a scurry here and there to find something, anything that fit me. I spent a lot of time running.

I ran toward the ideal of Barbie’s dream house, the Leave it to Beaver picket fence I thought should define the borders of my happiness, and the pinnacle of self-actualization on the mountain of Maslow’s hierarchy.

At one point or another, each of these seemed to be the right answer.

I also ran away from the terrifying prospect of hiking through life solo, without a constant companion who would lend me the anesthesia of her companionship, her courage, dazzle, or sex appeal.

My world was infused with so many ideas of what I should and should not be. I should be patient, tidy, kind, responsible, and smart. I should not be impulsive, chaotic, cruel, whimsical, or too smart.

In trying to fit inside the conflicting messages of what I should and should not be, I became a consummate people pleaser with virtually superhuman abilities to  shape-shift, style-flex, and bring pleasure to everyone I encountered… except me. I was isolated in my unboxed life and miserable.

“To be nobody but yourself in a world which is doing its best day and night to make you like everybody else means to fight the hardest battle which any human being can fight and never stop fighting.” ~ E.E. Cummings

The courage to find your authentic self takes many forms. Courage requires turning away from the many messages preached by those who influence you; your parents, peers, teachers, pastors, and the ever-present media of who you should be.

It takes audacity to take the life-script written for you and edit it to suit what makes your heart sing, even to the point of shredding it entirely and piecing together slices of scripted words to create a daring new story.

It takes that mustard seed of faith to prove you are less crazy than those who surround you, those espousing conventional wisdom, straitjackets in hand, ready to constrain you if your actions frighten them.

Courage is the sun’s knowledge she was born to rise every morning and light our way in the world even if clouds may temporarily occlude her brilliance. Courage is getting out of bed; getting dressed is a bonus. On some days, courage is sitting still even when the act of stillness demands far more energy than taking action.

Courageous stillness shuts out noise, allowing silence to enter and alight alongside you, reassuring you with its mirror of your tranquility. By sitting in stillness, courage can listen to the silence and, with the cacophony of the world shut out, hear the messages of wisdom the ages are sending you.

I sat still. I listened. I heard. The silence spoke of my own needs, peace, and journey.

Although it felt brutal at the time, the silence made it clear I was on another’s path and not my own. In choosing my next course, I knew I must choose to stop dying the slow death of pleasing others and choose to live on my own path. In this, I appeared certifiably insane to those who comprised my world at the time.

I leapt out of my poster-child happy marriage into a void. I spent ten years falling, getting back up, still in search for the special box labeled Me. I dug deep into my roots. I sought out and revisited my first love. It was glorious, exquisite and entirely wrong. I climbed out of that magnificent wreckage to make so many unexpected discoveries.

I discovered I was terrified of being alone. I discovered I had used others’ bodies, vision, courage, and sparkle, to fill the relentless emptiness in my chest. I found the courage to be alone. I found my own comfort. I learned to trust myself.

I developed a deep abiding relationship with the person I had ignored for most of my life — me. I found the courage to be unapologetically intelligent and no longer dumb myself down. I found the courage to take the risk of looking foolish in order to learn a new skill. I took salsa lessons and looked silly for months, but did not care.

In the course of attempting to define my box, even my sexuality has run the gamut from being a self-proclaimed flaming heterosexual in my early college years, to being exclusively lesbian for nearly three decades, to choosing  a man I believed could be a part of a no strings/friend with privileges type of relationship because I was bitter and disgusted with love.

Ironically, I fell in love with that man and, in this, found I am not a no strings type of woman.

After two years in the relationship that was never supposed to be a relationship, we parted.

With my newfound courage, I knew I could be single and not melt into a puddle of tragic goo.

I found the courage to be different from those around me, often falling outside any of the norms imposed by their own concept of limits. I found the courage to seek out and do what makes my heart sing; creating art from discarded paint-chipped window frames, found beach glass and wood, and bits and pieces of stamps, pictures, tea boxes, and other ephemera.

I found the courage to write prose and poetry outside my comfort zone and, through this, show my belly and reference the ample body I have fought to hide my entire life. I found the courage to respectfully acknowledge others’ opinions, but move on past them to find that which suits best me even if others would deem it flighty, unpredictable, and inappropriate.

I found the courage to ‘be’ me.

My authentic self is a good girl, a bad girl, a wife, a mommy, the occasional slut, corporate professional, and an earth mother, all in one.

I am a fortress, expertly crafted and protected, yet open to a whole world of experience and people. I am embodied by a flexible, translucent, permeable membrane that allows me to ebb and flow along with my desires.

I can stand on the edge of a storm-swept cliff, yet gently cup a handful of sand so as not to lose a single grain.

I am as blindingly beautiful as the sun, as humble as a Buddhist monk, as gentle as a feather floating on the breeze, as fearless as a lioness protecting her cubs, as flawed as a kindergartener’s penmanship, and as perfect exactly as I am. No single box could possibly define me.

The authentic me is the ultimate juxtaposition, and I have stopped apologizing for it.

I’m a bitch, I’m a lover
I’m a child, I’m a mother
I’m a sinner, I’m a saint
I do not feel ashamed
I’m your hell, I’m your dream
I’m nothing in between
You know you wouldn’t want it any other way.

The world will define your box if you let it. Find the courage to defy the pressures to contort and fit into a single box. Have the audacity to live box-less.

True, a life without borders can be terrifying at times, but speaking as one who has broken free, rarely looks back, and has no regrets, it is well worth the effort.

Mk Michaels is an obnoxiously optimistic dreamer who can find the silver lining in a stinking pit of despair. She has been writing poetry and prose for as long as she can remember, and is particularly fond of an intensely deep poem she composed about the color red in a second grade writing assignment: “Red is a color that never gets duller than bricks. Red is a color that really ticks…” Her writing topics have expanded since then to include love, life, children, anger, ghosts of relationships past, and blue. You can connect with her via Facebook or email.

back to top
To Implant Ideas of a Beneficial Nature
Why we cry
Frequency Gates – What The Heck Are They?

We have 1786 guests and no members online