What Returning Your Shopping Cart Says About Your Personality 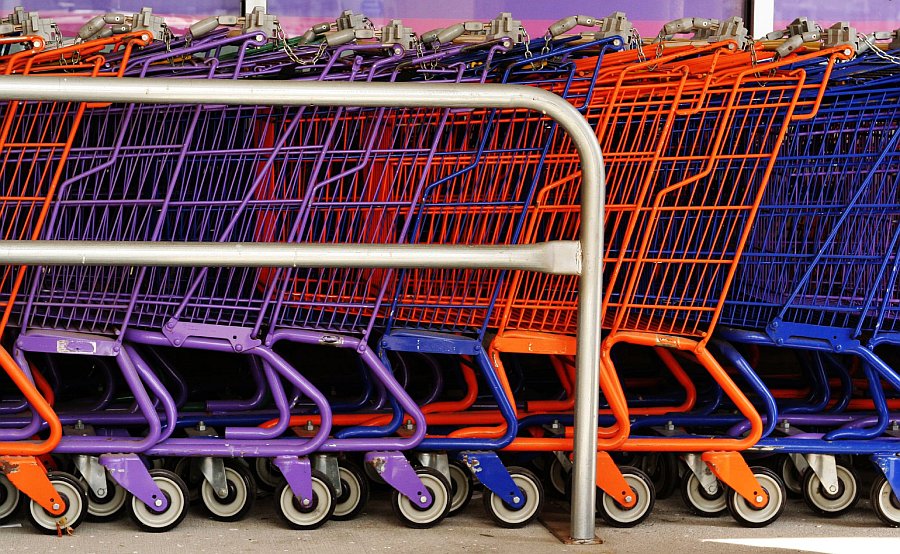 Shopping carts are like tumble weeds—the more that collect in one spot, the more likely you’re going to get blasted with one when the wind blows.  Or, at least, that’s how I look at them…Huddled in the corner of a parking lot, just waiting for the right gust of wind or slight change in temperature to come blasting towards your car door.  I’ve always thought of these little clusters of metal as a sure sign that someone, somewhere, is being lazy.

And I think that’s it, you know?  We, as a species, have become so lazy, that we don’t even take the one minute anymore to put our carts back in their little corrals.  We’re too busy thinking about what Trump said on Twitter, or that Netflix premiere of a show we don’t actually give a crap about, but were told to.  We don’t even take responsibility for our garbage anymore…We either throw it on the ground or put in a bin that someone else takes care of.

So, this is what I started to think…There must be a correlation between who does and doesn’t put their cart back, and what sort of person they are.  Maybe those who do are better disciplined?  Maybe those who don’t haven’t learned how to time manage?  Maybe we’re all missing some bigger picture that can be explained by our shopping cart behavior….Whatever the case may be, it’s interesting to take a look at.  Below you’ll find some thoughts on the matter that I’m currently sharing with the folks over at The Earth Tribe.

(And hey, if you actually physically can’t bring a cart back due to a disability, don’t let this article be anything other than an amusing pondering….)

If you’re a returner, then you’re probably putting the needs of others first…

Come on…You and I both know that when you are leaving a cart behind somewhere other than its proper place, you’re not thinking about the person who is going to need to collect it later.  You’re thinking about Tweets and dinner plans.  Or you’re in a hurry because you need to get a hundred things done today.  Or you’re going to miss an appointment.  Or it’s sleeting and sh*ting rain outside, and you just want to get to your nice, dry apartment.  It really doesn’t matter, honestly, because you’re choosing yourself in that moment.  And not someone else.

That’s right, dudes, there are other people who are influenced by your actions every day.  When you leave your cart behind, someone else is going to need to use their energy to get it back to where it belongs.  Or they are going to be directly influenced by it–i.e. their car is going to get scraped by it when another person pushes it out of the way to get to their car.  Carts, after all, are physical objects that most often just sit somewhere, and when they sit in a parking spot or the middle of a driving aisle, they become a hazard.  And that hazard was caused by you leaving it there.

So, here’s the deal, why not take the extra moment out of your day to be nice to the next person who is going to touch that cart?  Whether it be the attendant picking them up or the person who might want to use it, you’ll be sacrificing a fraction of your day for taking responsibility for your actions.  And that’s a pretty big deal because as soon as you do that one small act, then you’re more likely to become aware of all the other little acts you can take throughout the day that effect others in the same way.  Throwing out garage you see on the ground so it doesn’t blow into someone’s lawn….Putting your tried-on clothes in the store back on their hangers so the exhausted changing room attendant doesn’t have to…Helping your neighbor pick up the leaves that have blown over into their yard from your big oak tree.  Man, the possibilities are endless, but the point is that you’re doing something for someone else.  You’re not being a selfish, self-centered a-hole, and the world really needs more of those these days…. 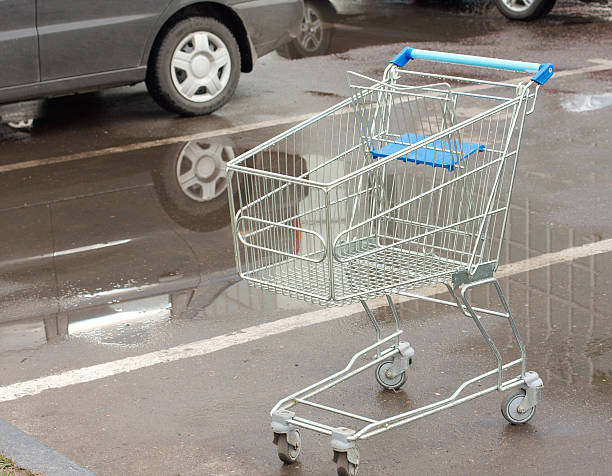 Man, you might just be a more disciplined person if your try out putting that cart back…

You’re right there…Like a few yards away from the cart corral, and you have a screaming baby in the car, a kid who demands that she get those Fruit Loops you just bought, and your phone is ringing.  You know you could just ignore all three, and bring that cart to where it belongs, but you just. don’t. know. if. you. can.

It’s a tough choice, though, right?  ‘Cuz you want to.  You want to be a good person, but your hands are almost literally tied on this one.  But here’s where you can shine.  Here’s where you can step up to your own moral plate and make a choice that will prove that you are capable of follow through.

You see, it’s easy to not be disciplined.  We fall out of line with ourselves and our moral standards quite often.  It doesn’t help that we’re bombarded by 100 forms of media that are constantly pulling us in different directions like some sort of medieval torture device…But we do have a choice, in these small moments, to control our own destiny.  We can show those who are around us, especially our kids, that we’re able to stick to our guns.  For kids, that’s a huge deal.  Because there are so many ways that we’re asked not to, every day.

Buying that candy bar in the check-out aisle?  No, we don’t need it, thank you.

Our friends or family asking of us to do something we really don’t think is right?  Definitely not, guys.

Believing that what our politicians are telling us is what is actually the truth? Nope, going to question that, too.

It’s possible for a small thing to grow into a big thing.  Putting one cart away means you’re standing up for doing something right, and that can start to influence the rest of your life.  One step at a time. 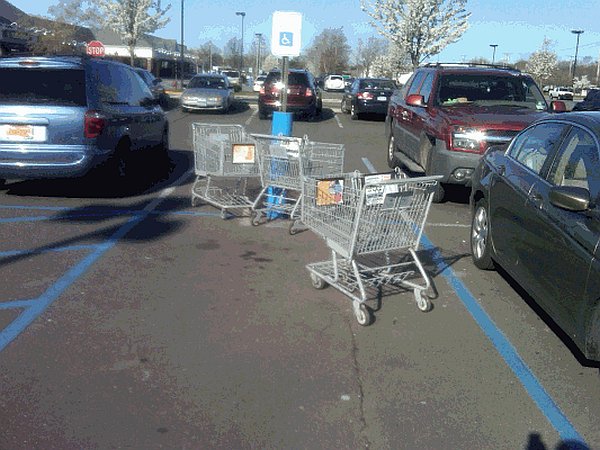 Maybe, just maybe, if you return that cart, then you’ll be a happier human…

Think about it…If you’re doing something like returning a shopping cart, then you’re thinking about other people.  You’re respecting other people.  That probably means you respect yourself, too.  This probably means that you’re respected by others because they see you doing these small things, and respecting yourself.  Which means you’re more likely to have good friends, which means you’re probably, in general, a little bit happier.  You’ve got friends who support and respect you, and you have your self-respect.

That’s a nice recipe for a happy sandwich, don’t you think?

When we act nicely towards others, when we are giving, patient, and kind, we are attracting those same qualities.  It’s not that much of a leap to see that small acts of kindness eventually build up into large acts, and eventually fill your days with warm fuzzies in the heart region.  Even on the darkest of other days, you’ll be able to look at your past, and see that you’ve done small rights in the world.crystalwind.ca

Look, it’s easy to get up in negativity.  Like I mentioned, we’re kind of surrounded by it.  It brings us down, makes us doubt, and puts us in a place that is sometimes really difficult to get out of.  But try to remember that there are ways to make this all better.  There are ways to still be a good human.  It just might be small, and might seem insignificant, but in the long run, they aren’t.

Pollution doesn’t happen with one car.  It happens with all the cars, and all the people, who have stopped caring.

You can care.  About yourself.  About others.  About everything.  It just takes the first step. 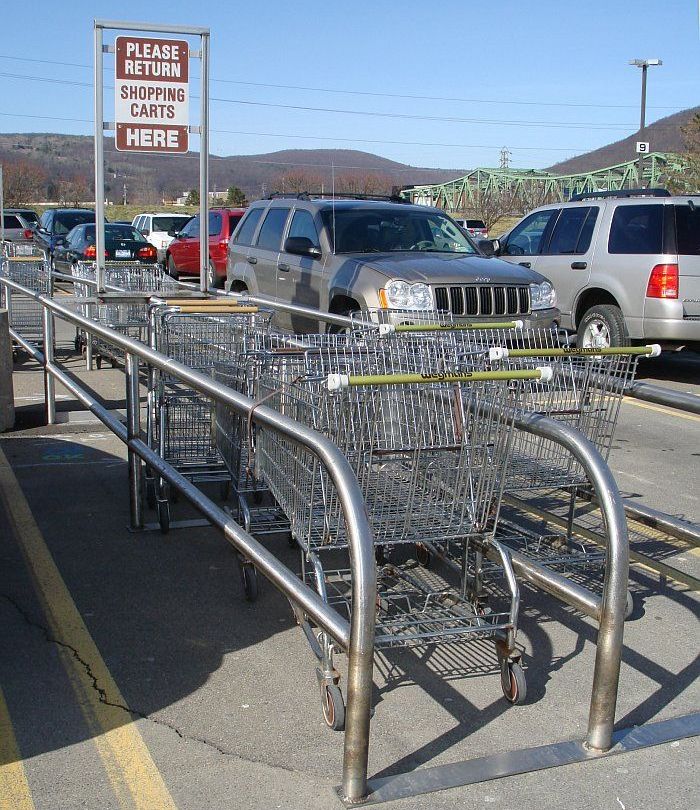 Which can be as little as taking the shopping cart back to where it belongs.  It seems funny, and maybe you’re thinking, “I totally do nice things, but I just don’t see the point in doing this.”  And that’s okay.  You’re just not getting it yet.  If you sit, and observe, on one of those days you have extra time, and see how people react to those carts in the parking lot that are floating around like weeds, then you’ll see how, over time, one person’s act actually turns into something much larger.  You’ll see that your one act, when added with everyone else’s, is actually a pretty big deal.

And then maybe you’ll get out of that fancy SUV, and help the older lady parked next to you in bringing back her cart.  Because you’ll start to see what actually matters….

Whatsapp
back to top
We Don’t Want to Kill You
Looking at Today’s Reality: IS THIS REALLY AND TRULY WHAT WE HAVE COME TO?
How To Manifest

We have 1093 guests and no members online