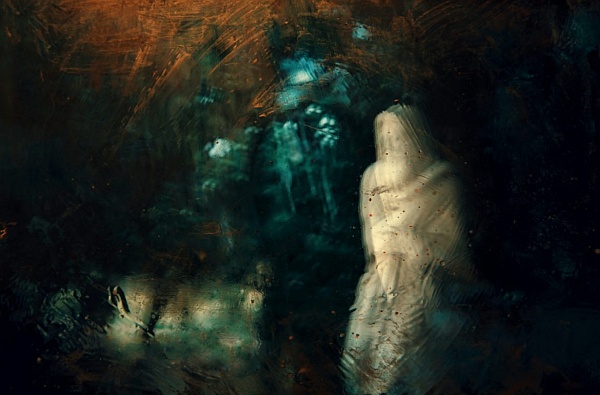 A Full Moon in Scorpio never comes over unannounced. We’ll always find tiny breadcrumbs trailing a path towards the deepest darkness that roars to be set free. Or chilling gusts of musty air blowing in from places that have been locked shut for too long, basements, cellars where shame and desire hide away.

Regardless of our modern burial customs, nothing in nature is ever meant to stay inert, dead and hidden for eternity, because nothing ever really dies. In the vocabulary of nature, death simply translates to a release of pent up power no longer imprisoned into something bound to decay. So it doesn’t matter how carefully we try to hide what has been long deteriorating, changing shape or form, transitioning into a successive state of being, banging on the wall, lurking in the corners — sooner or later, we all have to shine a torch in the pit and maybe prepare for an exorcism (which is not exclusively a Christian tradition, just like the word itself does not etymologically refer to negative or demonic entities; literally, it just means “administration of an oath”).

The Scorpio Full Moon is that light in the pitch-black darkness, it’s every closet and every cellar door blowing open and releasing the ghosts that haunt us. It’s a moment of culmination. Of extremes, perhaps, because such is the nature of Scorpio. Of diving to the deep end of the pool to overcome the fear of drowning. Of things accelerating all the way to the next level, which may or may not be termination. It’s a reckoning of secrets. It’s closure. It’s catharsis. It’s, ultimately, a release of power, whether we choose to hold space for evolution or completely amputate. That power is set free. The void is ours to fill, and we can reclaim those existential spaces where we feared to tread.

The Full Moon in Scorpio arrives on May 7, 10:45 AM UTC, 17°20 of the sign, but the build-up of energy is palpable already. Emotional and psychological subtexts are turning into writings on the wall. Hidden feelings are surfacing. Truth is being exposed, inch by inch. But this is just the beginning, because, ultimately, there will be a peak of intensity, urging us to wholeheartedly surrender to transformation and let ourselves be shaken to the core, cleansed. Not quite healed, perhaps, but certainly freed from the burden of not knowing, or from the deadweight of lingering obsessions and haunting fears.

The process, in itself, might be unsettling: there is hardly anything easy or pleasant about feeling raw and vulnerable, accepting hard truths, speaking oursknowing that we, ourselves, might make someone else feel exposed and uncomfortable. It’s the price of not being dead inside. Of being authentic even when it’s unsettling, because we know we have to keep flowing, and there cannot be flow without release, if we ourselves turn into deadweight from all the unexpressed grief, all the things left unsaid, all that we don’t allow ourselves to mourn.

The Full Moon in Scorpio opposes the conjunction of Sun and Mercury in the sign of Taurus, whose dispositor is Venus in Gemini, currently in her pre-Retrograde shadow phase: processing information and speaking up is likely to be a strong theme for this lunation. Transformation and release might be triggered by conversations around sensitive topics, announcements, declarations and long overdue answers. Perhaps, the word end — to an unhealthy power dynamic, a relationship that has run its course, or a situation that has become detrimental — will be spelled in full.

However, the trine between the Full Moon in Scorpio and Neptune in Pisces takes some of the edge off and promises an epilogue of relief, transcendence and mercy, a willingness to hold space for feelings — ours, others’ —, and a wider range of possibilities being disclosed by this process. Perhaps it’s about the spirit of something, living on. About further layers of reality expanding our awareness of what is actually possible. Inspiration. Compassion. Meeting God in the abyss, like those Christ statues sitting at the bottom of oceans or lakes. Neptune makes it all easier. Sweeter, even.

As for the ruler of this Full Moon, we can look at both Mars in Aquarius and Pluto in Capricorn (I’m not particularly picky about rulers. I see no reason why we can’t use both). With Mars transiting Aquarius, this Full Moon might see us fighting, consciously or unconsciously, for authenticity, honesty and emotional freedom; the urge to emancipate ourselves from psychological subordination to a power dynamic, or from the hold that our mental ruminations have on us, might be a major driving force behind our actions and emotional responses.

As for Pluto, the modern ruler of Scorpio is currently Retrograde in Capricorn: the themes and dynamics surrounding this Full Moon might be reminiscent of lingering issues from our recent past that demand to be dredged up and acknowledged.

The trick about this Full Moon, and about Scorpio in general, is to be willing to step on the other side of fear. It may not be easy, since Scorpio tends to trigger our deepest fears around survival, but sometimes, fear sits at the threshold of the only way out of a situation. Should she demand a sacrifice or a libation, we can simply hand over all that didn’t kill us and all that we can survive without.

If you want to know more about the upcoming Full Moon in Scorpio, you can purchase an Astrology reading. Tarot readings are also available!
If you want to support me without purchasing a service, you can make a donation via PayPal, or buy me a coffee.