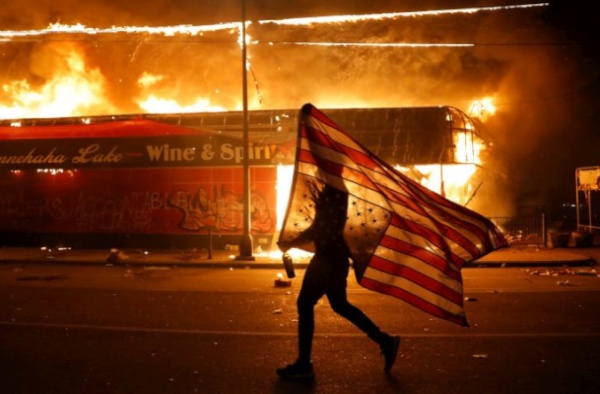 The Aries full moon on Thursday, October 1, 2020, is linked to unstable Uranus through unstable aspects. So the major theme of the full moon October 2020 astrology is the release of tension.

The October 2020 full moon is strongly influenced by Mars retrograde square Saturn. This indicates frustration and anger that has been building for at least one month.

The October 1 full moon also activates a fixed star that gives bad judgment and a quick temper. The combination of these influences creates a highly charged, impulsive, and dangerous full moon energy.

There will be a strong tendency to act impulsively and to lash out. Outrage, rebellion, and rioting are likely. But the tension created by the buildup of anger and frustration is best released more safely through flexibility and adaption.

The October 1 full moon at 09°08′ Aries is linked to Uranus by green aspects. This combination indicates instability, change, tension and anxiety. The chart below shows another strong planetary influence on full moon October 2020, Mars square Saturn which increases frustration and impatience. 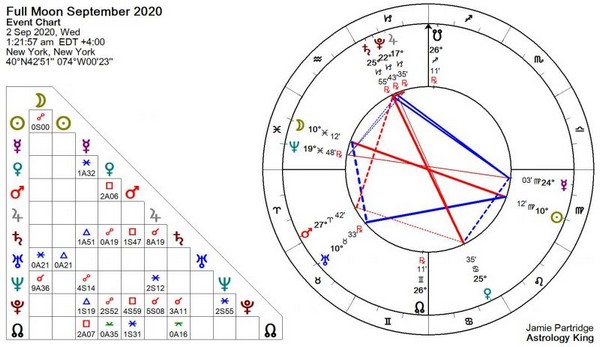 Sun quincunx Uranus can make you nervous, tense and anxious. A buildup of unstable electric energy can feel exciting but also scary. You may find it difficult to relax, especially if your freedom has been restricted or your creative self-expression blocked.

Pressure to change may come from someone with some power over you, changing circumstances, or an unexpected event. You may have to change your routine, behavior or plans. It is important to be flexible and adapt to changing conditions. An adjustment is needed whether you are forced to make changes or you find a different way forward yourself.

Mars square Saturn brings delays, impatience, restrictions, frustration and inhibition. With a half-degree orb, it is a strong influence on the full moon October 2020 astrology.

The frustrations have been building for a long time because this aspect stays within a three-degree orb from August 15 to October 9. This full moon comes only two days after the climax of Mars square Saturn on September 29.

Mars retrograde from September 9 to November 13 is exacerbating this seething anger. An example of this effect is the ongoing rioting and anger directed at the police and other authorities in the USA.

The long triangle aspect pattern highlighted in the full moon chart is termed an Irritation Triangle. It is formed by an opposition (red), a quincunx, and a semisextile (both green). It needs constant movement and activity resulting in shorter or longer periods of hectic overexertion.

The energies stored in the opposition (Sun opposite Moon) are looking for a way to resolve the state of the opposing pressures, the blockage of energy flow, and the rigid attitude they produce. Over the quincunx (Sun quincunx Uranus), you become painfully aware of the liberation of tension as a desperate longing.

Sudden bursts of anger can arise as a reaction to external pressures. This defensive behavior does not last long, though, it is over quickly and forgotten again. The ability for flexibility and adaptation enables you to be evasive and to quickly make up for the damage caused or hurt feelings. 1

The star map below shows the October 1 full moon is the Constellation of Pisces, even though it is in the Sign of Aries. This discrepancy is due to the precession of the equinoxes which has moved the Sun Signs almost a whole Sign out of alignment with the Constellations from which they were named over 2000 years ago. 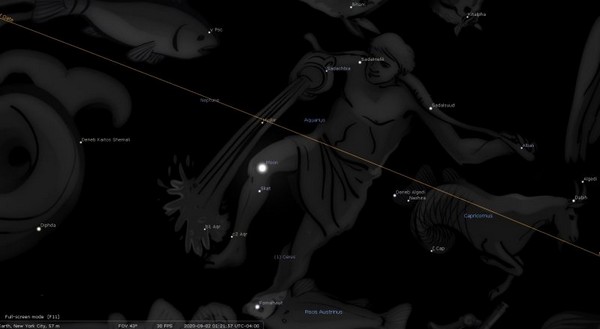 But the full moon does not align with any major star in the Fishes. It does, however, align closely with a star on the Wing of Pegasus called Algenib at 09°26′ Aries.

Fixed star Algenib is of the nature of Mars and Mercury (high enterprise, combative, destructive). It gives a quick temper, bad morals, drink or bad habits, and denotes the naked and poor professional beggar. 2

But Algenib also gives a penetrating mind, strong will, determination, an impressive way of speaking, and a gift for oratory. 4

The October 1 full moon is linked to the unstable and disruptive planet Uranus, through unstable and disruptive aspects. This creates tension and anxiety that naturally seeks an outlet through constant movement and activity. However, spontaneous and uncontrolled release of tension can result in impulsive actions and sudden bursts of anger.

Mars retrograde square Saturn is an ongoing influence that has led to a buildup of anger, frustration and resentment. It increases the Uranus impulse to lash out and rebel. This is not helped by fixed star Algenib which gives bad judgment and a quick temper.

So full moon October 2020 is likely to lead to an escalation of the unrest, rebellion, and rioting of recent weeks. The key to using this highly charged energy to your advantage is flexibility and adaptation. Minor changes and adjustments will allow you to take advantage of opportunities that arise from the changing conditions ahead.

The October 1 full moon lasts for two weeks up to the October 16 new moon. And that is followed by the second full moon of the month on the 31st, the October 2020 blue moon.