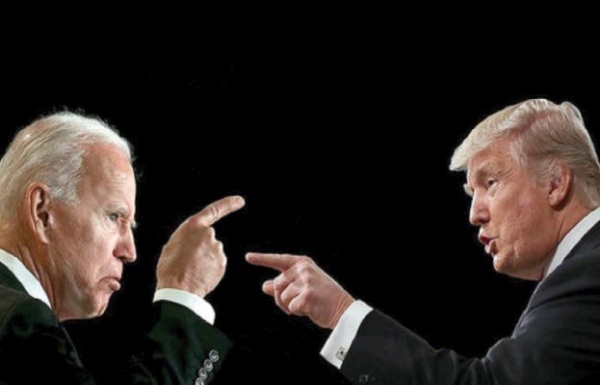 The Libra new moon on Friday, October 16, 2020, is harshly aspect by the three most challenging planets: Mars, Saturn, and Pluto. New moon October 2020 could easily result in anger, resentment, frustration, and the abuse of power and authority.

The October 2020 new moon does align with the two very fortunate stars. So achievement and success are possible if this highly competitive new moon energy is channeled into hard work and determination.

But a ruthless quest for power is likely to result in polarization, extremism, conflict, and violence. The US presidential election on November 3 falls within this moon phase.

The October 16 new moon at 23°53′ Libra aligns with the two most fortunate fixed stars used in astrology. However, the chart below shows the new moon is very harshly aspected. There are squares from Saturn and Pluto, and an opposition from Mars. So it will take a lot of hard work and dedication to realize the potential good fortune of the fixed stars. 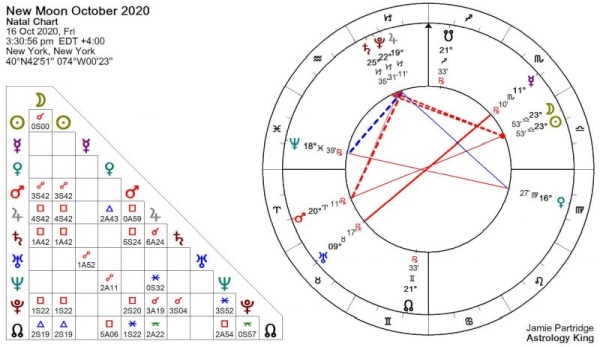 But strong resistance and aggressive responses are likely if you are too forceful in trying to get your own way. Patience, tactics, and a more subtle approach are required to succeed. Underhand tactics like trickery or passive-aggressiveness will not work.

The key to dealing with any arguments or conflict is to be open and honest about your strong desires. Avoid risk-taking and acting rashly. Sex, exercise, sport, and hard physical will release tension from your body.

New moon square Saturn presents tests and challenges that make it harder to get your own way and reach your goals. Delays, restrictions, deadlines, criticism, and extra responsibilities may damage your self-confidence and leave you feeling weighed down, pessimistic, or depressed. Pressure may come from authorities figures, government agencies, or banks.

This is a test of your character. Trying to avoid responsibility or procrastinating would only delay the inevitable and probably make matters worse. You must strive to meet your responsibilities with patience, determination, persistence, and a strong work ethic. Facing challenges head-on will reduce worry and lead to achievement, satisfaction, and respect.

New moon square Pluto increases your need to be in control, but can also lead to ego conflicts with powerful people or authority figures. A crisis or conflict would feel intense and could lead to obsessions, possessiveness, or other extreme behavior.

Deeply buried fears may be exposed involving death, loss of control, abuse, or persecution. Gaining conscious awareness of fears and controlling behavior will make you feel less threatened and help you evolve. This transformation will give a greater sense of inner power. You can then channel your intensity into success through ambition and hard work.

Mars square Pluto intensifies your passionate desires and your need to be in control. A ruthless quest for power and success can make others feel threatened and lead to power struggles and aggressive reactions. Or others may try to dominate or control you. Try to avoid resentment, provocation, and subversive tactics. 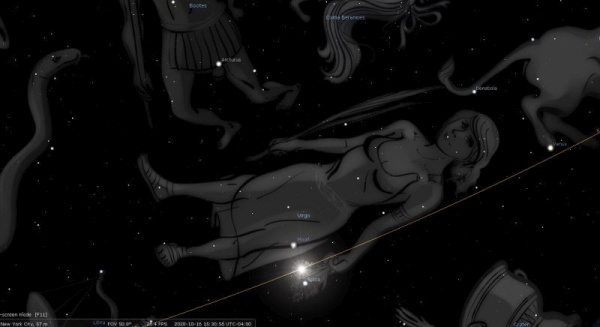 It brings honors and fame, and is of marked good fortune for scientists, writers, artist-painters, sculptors, and musicians. 2 Spica also gives androgynous, spiritual, and religious qualities, with above-average psychic awareness. 3

Sun conjunct Arcturus: Success through slow and patient plodding, friends among the clergy, favorable for gain, and for dealing with the public and lawyers.

However, Arcturus has a reputation for achieving justice through power. It makes people belligerent and quarrelsome. If critically aspected (yes), the good influence will be hampered or made into a real handicap. If involved in legal action, such a native may lose all. 2

Mercury stations direct on November 3 at 25°53′ Libra, only 2°00′ from the October 16 new moon. It is even closer to Arcturus and also critically aspected (square Saturn and Pluto).

The combination of the planetary aspects creates a highly dynamic energy that is best channeled into determination, persistence, and hard work to achieve a specific goal. The promise of the fortunate fixed stars can then be realized. But if the focus is only on achieving power, polarization and conflict will result.

The October 16 new moon lasts for four weeks up to the November 15 new moon. The 2020 US presidential election on November 3 falls within this moon phase, on the same day Mercury stations direct. So there is the real possibility of a contested result, abuse of power and authority, and acts of violence. There is also a full moon before the election on October 31. It is conjunct Uranus and a violent fixed star which increases the risk of unrest.