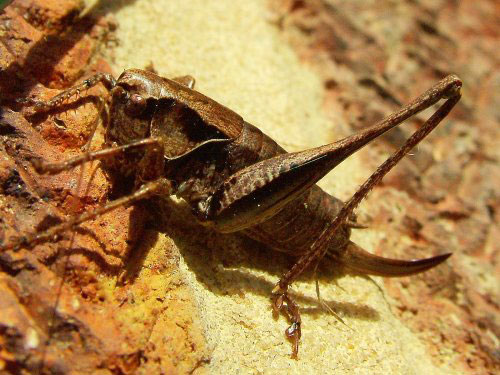 When it comes to Chinese superstition, the cricket plays a critical role. Throughout history, they have resembled intelligence and good fortune. In fact, if a person were to harm a cricket, it was believed they would have great misfortune. Even today, in parts of eastern Asian, the male cricket will be caged so people can enjoy the song they make.

The Chinese culture is filled with interesting and unique facts, with the cricket being one. Children in China still love catching crickets and placing them in cages. No doubt, this will be a favorite pastime throughout time.

The cricket culture in China dates back 2000 years and encompasses singing insects and fighting crickets. During the Tang Dynasty from 500 BC to 618 AD, the crickets were respected for their powerful ability to “sing”.It was during this time that they started being captured and kept in cages so their songs could be heard all the time. In the Song Dynasty from 960 to 1278 AD, a new sport was developed called “cricket fighting”. 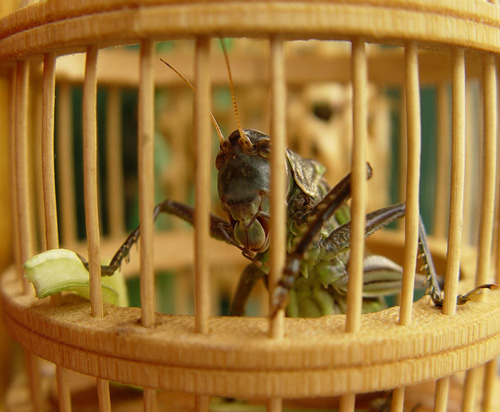 This sport became so popular that China actually produced a Cricket Minister, Jia Shi-Dao who reigned from 1213 to 1275. However, he was accused of not managing his responsibilities because he was obsessed with the cricket-fighting cult. Then from 1427 to 1464, a Cricket Emperor, Ming Xuan-Zhong ruled in favor of cricket fighting, making his palace a major tribute to this insect. Literally thousands of crickets were sent to the capital every year to discover their financial fate. Amazingly, there are hundreds of documented stories of people committing suicide because of a losing or injured cricket.

Eventually, even the Chinese farmers would use the cricket to tell them when it was time to start preparing the fields for the spring harvest. This indicator of climate change is called Jing-Zhe, which translates to “Walking of the Insects”.

Many famous Chinese songs were written, keeping the sound of the cricket in mind. For example, the autumn words Qiu, which are used in songs, actually take on the shape of crickets that are inscribed on bones or the shell of a tortoise. Even well known collections of poems and proverbs have been written that show reverence to the cricket. Some of these include Shi Jing, Shi Zhong, Sha Ji, and Cu Zhi.

The combination of singing ability, strength and vitality, and life cycles are what make this a creature of appreciation. The fact that crickets lay hundreds of eggs lines up perfectly with the Chinese belief that of all the ingredients for life, the one most important for success is to have as many children as possible. 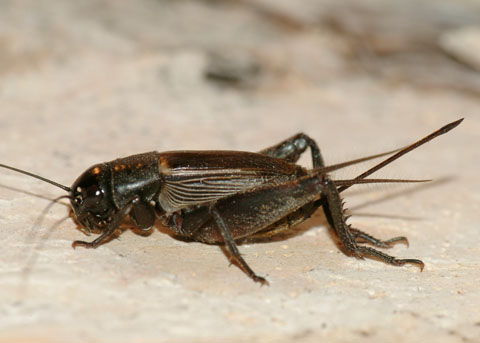 Crickets mate in the spring and lay their eggs in September. The eggs hatch in the fall and they usually hatch in groups of 2,000.

Crickets are known for their chirp (which only male crickets can do; male wings have ridges or "teeth" that act like a "comb and file" instrument). The left forewing has a thick rib (a modified vein) which bears 50 to 300 "teeth". The chirp is generated by raising their left forewing to a 45 degree angle and rubbing it against the upper hind edge of the right forewing, which has a thick scraper (Berenbaum 1995). This sound producing action is called "stridulation" and the song is species-specific. There are two types of cricket songs: a calling song and a courting song. The calling song attracts females and repels other males, and is fairly loud. The courting song is used when a female cricket is near, and is a very quiet song. Female crickets have a long needlelike egg-laying organ (ovipositor).

Crickets chirp at different rates depending on their species and the temperature of their environment. Most species chirp at higher rates the higher the temperature is (approx. 60 chirps a minute at 13ºC in one common species; each species has its own rate). The relationship between temperature and the rate of chirping is known as Dolbear's Law. In fact, according to this law, it is possible to calculate the temperature in Fahrenheit by adding 39 to the number of chirps produced in 15 seconds by the snowy tree cricket common in the United States.

To hear the mating call of other crickets, a cricket has ears located on its knees, just below the joint of the front legs.

There are about 900 species of crickets. They tend to be nocturnal and are often confused with grasshoppers, which are related because they have a similar body structure including jumping hind legs.

In 1970, Dr. William H. Cade discovered that the parasitic tachinid fly Ormia ochracea is attracted to the song of the male cricket, and uses it to locate the male in order to deposit her larvae on him. It was the first example of a natural enemy that locates its host or prey using the mating signal. Since then, many species of crickets have been found to be carrying the same parasitic fly, or related species. 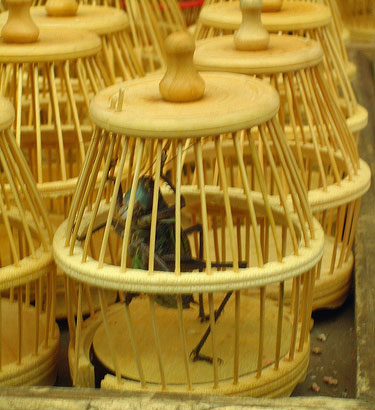 Crickets are popular pets and are considered good luck in Asia, especially China where they are kept in cages (Carrera 1991). It is also common to have them as caged pets in some European countries, particularly in the Iberian Peninsula. Cricket fighting as a gambling or sports betting pastime also occurs, particularly in Macao. Miniature cages are made from various materials and today, used as a way of bringing good luck into the home. In ancient days, the cricket cage was used for exactly what it sounds like – holding crickets.The cages are handmade and feature a tiny door that slides open and shut. On the top of the cricket cage is a small hook or eyelet that can be used to hang it for decoration. Although cricket cages do come in various sizes, on average, they measure about 3x4 inches.

The folklore and mythology surrounding crickets is extensive.

The singing of crickets in the folklore of Brazil and elsewhere is sometimes taken to be a sign of impending rain, or of a financial windfall. In Brazilian history, the sudden chirping of a cricket heralded the sighting of land for the crew of captain Álvar Núñez Cabeza de Vaca, just as their water supply had run out. (Lenko and Papavero 1996).

In Caraguatatuba, Brazil, a black cricket in a room is said to portend illness; a gray one money; and a green one hope (Lenko and Papavero 1996). In Alagoas state, northeast Brazil, a cricket announces death, thus it is killed if it chirps in a house (Araújo 1977). In the village of Capueiruçu, Bahia State, a constantly chirping cricket foretells pregnancy, but if it pauses, money is expected (K.L.G. Lima, unpublished data). The mole cricket locally known as "paquinha", "jeguinho", "cachorrinho-d'água", or "cava-chão" (genera Scapteriscus and Neocurtilla, Gryllotalpidae) is said to predict rain when it digs into the ground (Fowler 1994). 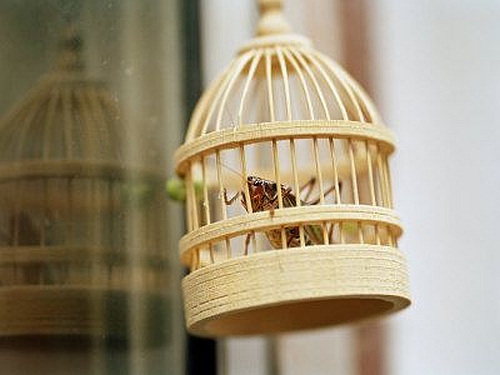 In Barbados, a loud cricket means money is coming in; hence, a cricket must not be killed or evicted if it chirps inside a house. However, another type of cricket that is less noisy forebodes illness or death. (Forde 1988) In Zambia, the Gryllotalpa africanus cricket is held to bring good fortune to anyone who sees it (Mbata 1999).

Crickets may also be eaten in some cultures, and are popular as live food for carnivorous pets.

In comedy, the sound of crickets may be used to humorously indicate a dead silence when a response or activity is expected. For example, if a comedian in a TV show tells a bad joke, instead of the audience laughing, crickets may chirp.

The Disney corporation has used a number of notable cricket characters in their animated movies through the ages. Most of these characters represent good. For example, in the movie Pinocchio, Jiminy Cricket is honored with the position of the title character's conscience. In Mulan, Cri-kee is carried in a cage as a symbol of luck, as in many Asian countries. 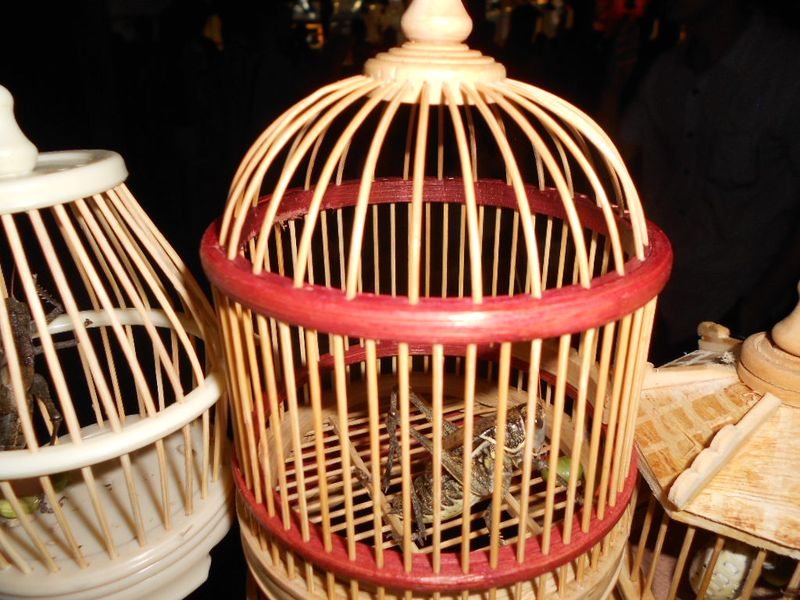 Archangel Hope - Be a Light to the World

The Importance Of Down Time - Daily Angel Message

Channeled Message: There are No Accidents