Channeling Spirit Guides
A+ A A- 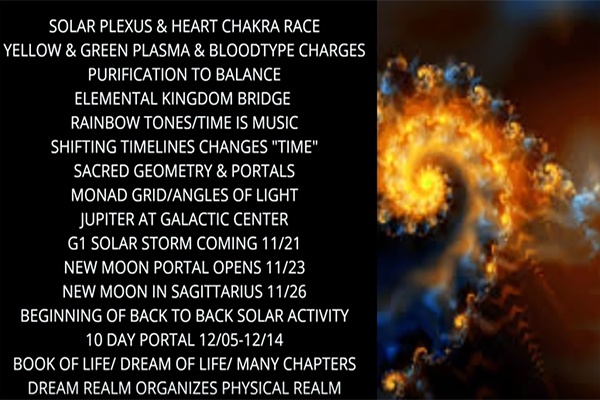 I have been getting messages about more of the collective (not all) accessing Monad consciousness and synchronizing with the Elemental Kingdom bridge with the Earth Soul, Planetary Light Body and Galactic Intelligence and of another group/groups consciousness functioning as a singular entity like Humanity that will be sending more clear messages- sending their" song" and this would be talked about in a more public way in the near future. I was told there would be talk about this, other life, in the near future due to this Galactic Intelligence and Telepathic Grid coming online for Humanity as one singular Entity. They showed me that it begins individually, then expands...then we project that consciousness/reality as a group. But there is a collective timeline where this does take place.

**the Plasma colors, to me, was a metaphor us being the Rainbow- electromagnetic spectrum

We began the 2007-2012 integration of the 13:20 timing frequency (related to Maya Calendar) Galactic Time in different timelines, accelerating in the synchronization with the Planetary Light Body. More (not all- for those aligned) of the collective will be accessing this timing frequency of Galactic and Cosmic Time more fully moving into timelines of what can be seen as their future selves, timelines that are already created, we just manifest that/or magnetize that. As the feminine energy, negative/magnetic charge & individual & collective subconscious/unconscious is used consciously/with intent-(by use of the masculine/conscious mind) many experience a quantum shift in reality. Jupiter is conjunct the Galactic center 11/19 at 13:20 Universal Time, its been about 12 years since the last/most recent time in December 2007, Jupiter & Pluto (Feminine, Soul, Subconscious Fusion) where both were @ Galactic Center in 2007. The Galactic Center moves 1 degree every 72 years- which is related to the 72 Names Of God. Jupiter at the Galactic Center while we have a Solar Storm coming is beautiful- Jupiter along with Venus and Earth are responsible for creating the pull and geometry for the 11-year Sun cycle and shifts/flip in magnetic field of the Sun.

Humanity as one singular entity is balancing polarity over a long period of time. We as individuals represent the magnetic and electric charges of imbalance within Humanity as One Entity. As we balance within ourselves- the charge within the collective balances. Everything is the Magnetic and Electric/ Feminine & Masculine.

The charges within an individual also relate to the frequency of the plasma..not so much the color- that message was just shown to me as a metaphor I believe.

There are so many other things related to the charges, including color, brainwaves and perception/consciousness...

We, as individuals are a reflection of the whole and balance of the universe. As within, So without.

CoVid-19 Update #9: What We Still Don’t Know
Become a Patron!

We have 1156 guests and no members online