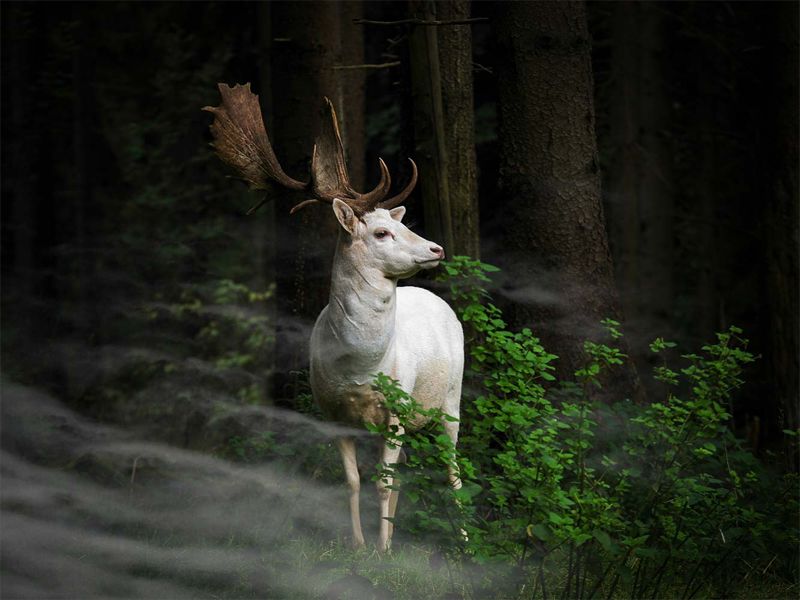 Meaning of a White Deer

The Native Americans believed the occurance of a white animal was a huge sign of prophecy – a sign from the great spirit that a major shift in their world was to come.

Usually, white animals were seen during soul-quests, or vision-quests.  However, if one was seen during the normal course of day, this would cause a tremendous ripple among the tribe.  A great meeting would be called, the elders would be consulted, and great care would be taken to communicate with the animal spirits to determine the meaning of the message.

When white occurs in the animal realm it is a message of:

Compound these attributes with the those that the Female deer represents:

The Male deer holds the same representations, but also includes attributes of:

Above all, we can recognize the sensitivity of the deer - alert, keen, and always aware – we can translate these qualities to of being spiritually aware – and this is why the deer is seen primarily as a spiritual symbol.

The white deer – is a message that you are on a path of growth and expansion that will lead you in a direction beyond your wildest dreams.  The message of the white deer is one of “get ready.”

Let me begin this true story, by saying there is no legend to the Great Spirit and the great White Deer, of the Lenape.

The White Deer is not a story nor legend, but a spiritual truth that has been passed from generation to generation of the Lenape people.

These stories, through the fear and need of the white man, to prove First Nations people's beliefs false, have been belittled and ignored as being "folktales", much like the way different religions discount others as dogma, myths or legends.

Many years ago, in the early 70's, while living in Delaware, I often went hunting with my husband. His grandmother, Pollyanna, was from the Sioux, so, naturally, it was "in his blood" to be an avid horseman, bow hunter and trapper.

In the season of bow hunting, in the year 1970, we went scouting, in particular, for the "legendary" White Deer.

For many thousands of years, on what we now refer to as the Delmarva Peninsula, there had been "talk" of the White Deer, not only with the Original peoples, but among the settlers and many generations of mixed bloods, thereafter.

Hunters have told of  having "the same dream" of becoming the one who would capture this magnificent four legged creature. They misinterpret the meaning of their dream, not understanding that the dream is for teaching a life lesson.

Every year, on the Delmarva Peninsula, many bow hunters are in search of the great White Deer that roams through the land near the seasons of hunting.

On this day, I went with great trepidation, in search of this spirit, with my husband but only desired to see this creature, for myself.

I did not wish to bring this spirit harm and was determined, if we were to see this great White Deer, I would persuade my husband to take no aim.

On the hour long drive to the place where the great White Deer had been seen, my husband was intent with retelling the stories of several men (whom we both knew) that had recently seen the White Deer spirit.

He said he had dreamed, the night before, that he would be the one to take this animal as a trophy. He was almost bragging and sounded as if he somehow thought he was "appointed" to do this terrible thing.

He was not an interpreter of dreams, and did not catch the meaning. He was not in touch with the spirit of the White Deer, nor why he was called forth, in the dream. He did not believe the four legged was a holy spirit and messenger.

The great White Deer did not challenge and showed no fear, but in these precious moments, my husband became a great hunter - a man who now understood he must respect the life of the four legged creatures.

After this encounter, he grew to understand he could no longer take the life of any creature, without making an offering to the Great Spirit

Now I will describe the beauty of the great White Deer. He is larger than the average buck deer, on theEastern Coast. He has an enormous rack which seems more comparable to the moose. He walks in silence and he walks in dreams.

When great White Deer was sure my husband understood, he turned back into the woods as quickly and silently, as he had appeared.

This is no miracle; this is no figment of imagination and is not anything for any man to deny.

This is how all Lenape people, (no matter what tribal name) are, from time beginning,  reminded to respect life, through the great spirit of the White Deer.

Thank you!
ॐ Namasté - Blessings!
"Life is an echo, what you send out comes back."
© 2008-2022 crystalwind.ca. All rights reserved.
Rest & Cleansing Moon
Wasp Medicine and Totem
The Sacred Pipe and Ceremony
Get This App Now!