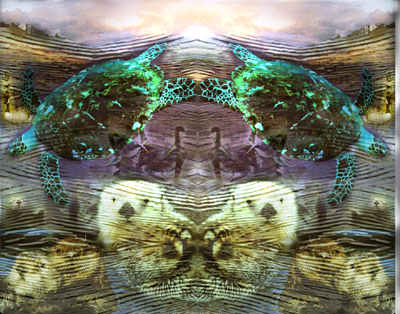 There was a world before this world, but the people in it did not know how to behave themselves or how to act human. The Great Spirit was not pleased with that earlier world.

He said to himself: "I will make a new world." He had the pipe bag and the chief pipe, which he put on the pipe rack that he had made in the sacred manner. He took four dry buffalo chips, placed three of them under the three sticks, and saved the fourth one to light the pipe. The Great Spirit said to himself:

"I will sing three songs, which will bring a heavy rain. Then I'll sing a fourth song and stamp four times on the earth, and the earth will crack wide open. Water will come out of the cracks and cover all the land."

When he sang the first song, it started to rain. When he sang the second, it poured. When he sang the third, the rain-swollen rivers overflowed their beds. But when he sang the fourth song and stamped on the earth, it split open in many places like a shattered gourd, and water flowed from the cracks until it covered everything. The Great Spirit held the Sacred Pipe as he floated on his huge pipe bag. He let himself be carried by waves and wind this way and that, drifting for a long time.

At last the rain stopped, and by then all the people and animals had drowned. Only Kangi Tanka, the Great Crow, had survived, though he had no place to rest and was very tired. Flying above the pipe, "Tunkshila, Grandfather, Please, I must soon rest." And three times Kangi Tanka asked him to make a place for him to alight.

The Great Spirit thought: "It's time to open the pipe bag."

After unwrapping and the pipe bag it was found to contain all manner of animals and birds, from which he selected four animals known for their ability to stay under water for a long time. First he sang a song and took Blega, The Loon out of the bag. He commanded Blega to dive and bring up a lump of mud. The loon did dive, but it brought up nothing.

"I dived and dived but couldn't reach the bottom," Blega said. "I almost died. The water is too deep."

The Great Spirit sang a second song and took Skeca, The Otter out of the bag. He ordered Skeca to dive and bring up some mud. The sleek otter immediately dived into the water, using his strong webbed feet to go down, down, down. he was submerged for a long time, but when he finally came to the surface, he brought nothing.

Taking Capa, The Beaver out of the pipe's wrapping, the Great Spirit sang a third song. He commanded Capa to go deep below the water and bring some mud. The beaver thrust herself into the water, using her great tail to propel herself downward. She stayed under water even longer than the others, but when she finally came up again, she too brought nothing.

At last the Great Spirit sang the fourth song and took Keglezela, the turtle out of the bag. The turtle is very strong. And, among our people it stands for long life and endurance and the power to survive. A turtle's heart is great medicine, for it keeps on beating for a long time after the turtle has died.

"You must bring the mud," the Great Spirit told Keglezela. Keglezela dove into the water, She stayed underwater for so long that the other three animals shouted: "The turtle is dead; she will never come up again!"

All the time, Kangi Tanka was flying around and begging for a place to alight. After what seemed to be eons, the turtle broke the surface of the water and paddled to the Great Spirit. "I got to the bottom!" Keglezela cried. "I brought some earth!" And sure enough, its feet and claws -- even the space in the cracks on its sides between its upper and lower shell -- were filled with mud.

Scooping mud from the turtle's feet and sides, the Great Spirit began to sing. He sang all the while that he shaped the mud in his hands and spread it on the water to make a spot of dry land for himself. When he had sung the fourth song, there was enough land for the Great Spirit and for the Kangi Tanka to sit and rest.

"Come down and rest," said the Great Spirit to the crow, and the bird was glad to. Then the Great Spirit took from his bag two long wing feathers of Anunkasan The Eagle. He waved them over his plot of ground and commanded it to spread until it covered everything. Soon all the water was replaced by earth.

"Water without earth is not good," thought the Great Spirit, "but land without water is not good either." Feeling pity for the land, he wept for the earth and the creatures he would put upon it, and his tears became oceans, streams, and lakes. "That's better," he thought.

"The first world I made was bad; the creatures on it were bad. So I burned it up. The second world I made was bad too, so I drowned it. This is the third world that I have made. Look: I have created a rainbow for you as a sign that there will be no more Great Floods. Whenever you see a rainbow, you will know that it has stopped raining."

The Great Spirit continued: "Now, if you have learned how to behave like human beings and how to live in peace with each other and with the other living things -- the two-legged, the four-legged, the many-legged, the fliers, the no-legs, the green plants of this universe -- then all will be well. But if you make this world bad and ugly, then I will destroy this world too. It's up to you."

The Great Spirit gave the people the pipe. "Live by it," he said. He named this land the Turtle Continent because it was there that the turtle came up with the mud out of which the third world was made.

"Someday there might be a fourth world," the Great Spirit thought. Then he rested.

Thank you!
ॐ Namasté - Blessings!
"Life is an echo, what you send out comes back."
© 2008-2022 crystalwind.ca. All rights reserved.
Address to Councils
Woodpecker Medicine
How To Recognize Your Totem Animal
Get This App Now!