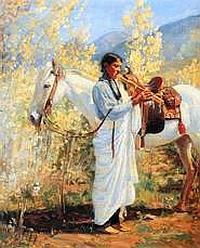 Once many generations ago, the people had drums, gourd rattles and bull roarers, but no flutes. At that long-ago time, a young man went out to hunt. Meat was scarce, and the people in his camp were hungry. He found the tracks of an elk and followed them for a long time. The elk, wise and swift, is the one who owns the love charm. If a man posesses Elk Medicine, the girl he likes can't help sleeping with him. But, this young man I am talking about, had no Elk Medicine.

After many hours he finally sighted his game. He was skilled with the bow and arrows, and had a fine new bow and quiver full of arrows. Yet the elk always managed to stay just out of range, leading him on and on. The young man was so intent on following his prey that he hardly noticed where he went.

When night came he found himself deep within a thick forest. The tracks had disappeared, and so had the elk, and there was no moon. He realized that he was lost and that it was too dark to find his way out.

Luckily, he came upon a stream with cool clear water. He had been careful enough to bring a hide bag of "Canpa" {Chahng-pah} and "Wasna" {Whahsh-nah}, dried meat pounded with berries and kidney fat. This was a strong and filling food that would keep a man going for many days.

After he had drank and eaten, he rolled himself into his fur robe, propped his back against a tree, and tried to rest. But he couldn't sleep, the forest was full of strange noises; the cries of night animals, the hooting owls, and the groaning of trees in the wind. It was as if he heard these sounds for the first time.

Suddenly there was an entirely new sound, of a kind that neither he nor anyone else had ever heard before. It was mournful and ghost like. It made him afraid, so much so that he drew his robe tightly around himself and reached for his bow to make sure it was properly strung.

On the other hand, the sound was like a song, sad but beautiful, full of love, hope and yearning. Then before he knew it, he was asleep. He dreamed that the bird called "Wagnuka pe sa" {Whahg-noo-kah pay shah}, the Redheaded Woodpecker, appeared singing the strangely beautiful song and telling him, "Okihan, chi waonspekiya niye" {Hoe-kee-hahng Chee Whah-own-shpay-kee-yah nee-yay} "follow me and I will teach you"

When the hunter awoke, the sun was already high. On a branch of the tree against which he was leaning, he saw a redheaded woodpecker. The bird flew away to another tree, and another, but never very far, looking back all the time at the young man as if to say, "Come on !!"

Then once more he heard that wonderful song, and his heart yearned to find the singer. Flying toward the sound, leading the hunter, the bird flitted through the leaves, while its bright red top made it easy to follow. At last it lighted on a Cedar Tree and began hammering on a branch, making a noise like the fast beating of a small drum.

Suddenly there was a gust of wind, and again the hunter heard the beautiful sound right above him.

Then he discovered that the sound came from the dead branch that the woodpecker was tapping his beak on. He realized also that it was the wind that made the sound as it whistled through the holes that the bird had made.

"Kola {ko-lah}, {My friend}" said the hunter, "Let me take this branch home, you can make yourself another one!"

He took the branch, a hollow piece of Cedar wood filled with the holes that the woodpecker had drilled. A branch that was about the length of his forearm.  He walked back to the village bringing no meat, but happy all the same.

In his "Tipi" {Tea-pea} the young man tried to make the branch sing for him. He blew on it, he waved it around, but no sound came. This made him so sad, he wanted so much to hear that wonderful new sound. He purified himself in the sweat lodge and climbed to the top of a lonely hill. There, resting with his back against a large rock, he fasted, going without food or water for four days and nights, Praying for the "Hanbleceyapi" {Hahng-blay-chay-yah-pee}, {crying for the vision} which would tell him how to make the branch sing.

In the middle of the fourth night, "Wagnuka" {Whahg-noo-kah}, the bird with the bright red top appeared saying, "Yanka niye" {yahng-kah Nee-yay} "Watch me," turning himself into a man, he showed the hunter how to make the branch sing, Saying again and again, "Yanka niye, lecon" {yahng-kah Nee-yay Lay-chone} "Watch me, and do this now," and in his dream the young man watched and observed all that was done, very carefully.

When he awoke, he found a cedar tree, and asking of its forgiveness, he broke off a branch, and working many hours, hollowed it out with a bowstring drill, just as he had seen the woodpecker do in his dream.

He shaped the branch into the form of a bird with a long neck and an open beak. He painted the top of the bird's head with "Washasha" {Whahsh-hahsh-hah}, the sacred red color. And then he prayed, bathing The "Ciyotanka" {Chee-yoe-tahng-kah}, The Flute in the smoke of the sacred incenses. First he used sage, then cedar and finally sweetgrass.

He fingered the holes as he had seen the man-bird do in his vision, meanwhile blowing softly into the mouthpiece.

All at once, there was the song, ghost like with a beauty beyond words, drifting all the way to the village, where the people were astounded and joyful to hear it.

With the help of the wind and the woodpecker, the young man had brought to them the "Ciyotanka" {Chee-yoe-tahng-kah} the first flute.

In the village lived an "Itanchan" {Hee-tahng-chahng}, a big chief.

This "Itanchan" {Hee-tahng-chahng} had a daughter who was beautiful beyond mere words, but who was also very proud, and she was convinced that there was no young man good enough for her. Many had come courting, but she had sent them all away.

Now, the hunter who had made the flute decided that she was just the woman for him. Thinking of her, he composed a special song, and one night standing behind a tall tree, he played it on his "Ciyotanka" {Chee-yoe-tahng-kah} in the hopes that it might have a charm to make her love him.

She was sitting in her father's "Tipi" eating buffalo hump meat and tongue, and feeling good.

She wanted to stay there, in the "Tipi" by the fire, but her feet wanted to go outside.

She pulled back, but her feet pulled her forward, and the feet won.

She saw the young man standing in the moonlight, she heard the flute.

So they stood face to face. The girl's head told her to be silent, but her heart told her to speak, and speak she did, saying,

"Koshkalaka {Koe-shkah-lah-kah}, young man, I am yours altogether and forever."

So they lay down together, the young man and the "Wicincilla" {Whee-cheeng-cheel-lah} under the one blanket.

Later she told him, "Koshkalaka {Koe-shkah-lah-kah}, My warrior, I like you. Let your parents send a gift to my father, the chief. No matter how small, it will be accepted. Let your father speak for you to my father.

And so the two fathers quickly agreed to the wishes of their children.

The proud "Wicincilla" {Whee-cheeng-cheel-lah} became the hunter’s wife, and he himself became a Great Chief.

All the other young men had heard and seen what the flute did for the hunter, soon they too began to whittle cedar branches into the shape of bird's heads with long necks and open beaks.

The beautiful love music traveled from tribe to tribe and made young girls feet go where they shouldn't.

And that's how the flute was brought to the people, thanks to the cedar, the woodpecker and a young man, who had shot no elk, but knew how to listen and learn from his Elders.

Thank you!
ॐ Namasté - Blessings!
"Life is an echo, what you send out comes back."
© 2008-2022 crystalwind.ca. All rights reserved.
Plantain
The 7 Sacred Grandfather Teachings
Remembering Bear
Get This App Now!