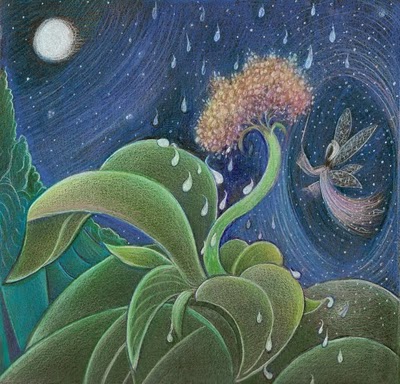 The four elements of nature: Earth, Air, Fire and Water are the very foundations of creation and the basis of life itself. Ancient myths and theories tell us that four Divine Beings 'Spirits' were sent to the fledgling earth (then a smoldering pot of confusion being created), to bring about order out of chaos. As the rays of their celestial bodies made contact with the crystallized influences of the lower world, they became the four elements linking humankind to nature, the heavens and the Divine.

Coming from celestial form sent by the divine beings the “Goddess and God”, the fifth element or “spirit” (sometimes referred to as Akasha); came from a lower hierarchy of spirits called Elementals. The elementals task was to govern the four elements. So Gnomes govern the Earth, Sylphs control the Air, Salamanders command Fire and Undines prevail over Water. Elements and elementals are assigned to the four cardinal points of a circle under the watchful eyes of the Lords of the Watchtowers (the Mighty Ones, Old Ones, or the Guardians), who are next in line on the hierarchy of the spirit world. So Earth and Gnomes are assigned to the North, Air and Sylphs to the East, Salamanders and Fire to the South, and Undines and Water to the West.

Elementals are those mystical creatures that dwell within the spirit realm of the elements, watched over and controlled by the Lords of the Watchtowers (the Mighty Ones, Old Ones, or the Guardians). Elementals can be related to “nature spirits” and the old favorite, ever written about “witches’ familiar”. These are the spirits that govern all nature, the “forces of life” that may be summoned to assist in working magic. It’s important therefore that we understand “who they are” and “what they represent”. Earth spirits are known as Gnomes, Air spirits as Sylphs, Fire spirits as Salamanders, and Water spirits are called Undines.

After the circle is formed and consecrated with the elements, a witch may next call down the quarters by invoking the Lords of the Watchtowers (the Mighty Ones, Old Ones, the Guardians), to preside and watch over the proceedings. Specific elementals; those whose correspondences best suit the work or rite being carried out, may then be invited to participate. Their correspondences are closely related to those of the elements, so I shall not re-write them here (See Correspondences in Part 1). Care needs to be taken when calling the aid of elementals, due to the duplicity of all things. Elementals are not always the helpful little creature’s we expect them to be, and can be mischievous, bad tempered little devils if allowed to get out of control.

In folklore elementals were thought to be fickle, malicious and unpredictable spirits sent by the “wicked-witch” in the form of familiars to trick people into accidents and traps and sometimes killing them. This is the sort of belief that led to the plight of witches during the Witch-hunt’s and purges of the 17th–18th centuries. Still today in contemporary Witchcraft, witches use pets and animals as familiars, but stress and emphasizes is given to working with good and friendly elementals in producing positive magic. A colorful character from contemporary times that used a familiar was Sybil Leek. Her trademark was a cape, loose gown, and a pet jackdaw named “Mr. Hotfoot Jackson”.

Gnomes are the spiritual beings who inhabit the spirit realm of the elements. As spirits of energy they are commonly invisible to the average person, only those that possess second sight can see them clearly. However being on the first level of the spirit realm, they are close enough to the physical realm in order to easily inter-react with it. By tradition Gnomes were the protectors of secret treasures hidden in caves beneath the earth. Legends have it that they were reluctant to help and aid humans, but if you were to gain the trust of one, they could prove to be powerful friends. On the other hand, if you were to lose their trust, deceive them or misuse their aid, then all hell could be let lose.

In Wicca/Witchcraft Gnomes are called to instill confidence, steadfastness and endurance, but can also be used to bring about gloom, melancholy and despair should that be required. In some old legends Gnomes were ruled over by a king called Gob whose followers became known as Goblins. Goblins were wondering mischievous sprites that would attach themselves to households, particularly those containing children. When they moved in, they would help by doing the chores at night and by playing with and disciplining the children, giving them presents when they were good or punishing them when they were bad.

When upset the Goblins general good nature could became unpredictable. They would bang pots and pans in the kitchen at night just to keep the household awake, or move furniture about while knocking on walls and doors and snatching bedclothes off sleeping persons, generally becoming a nuisance. You’ve heard of poltergeist activity? Well this is a type of it. A Poltergeist is generally believed to be the spirit of a departed person or animal, who hasn’t for various reasons withdrawn from the physical realm. It can also be an elemental that has been called for a task and for some reason failed to complete it, hence the haunting. Witches are often called to exorcise haunting by contacting the spirit and persuading it to move on, or if that fails they can contact higher spirits or deities to banish them.

Gnomes and Goblins can be called to aid all magic associated with the element Earth as given in the correspondences above.

Sylphs are the spiritual beings that inhabit the spirit realm of the element Air. Their activities are manifest in the gatherings of clouds, in the blowing of the wind, the downpour of rain and the formation of snow. They are also responsible for the growth and maturity of all the plant life we see around us. In folklore, Sylphs appeared in many myths and legends. Some tales tell us that if you listened carefully, they would talk to you on the wind as it passed through caves and caverns.

Its been suggested that the Muses of Greek mythology were Sylphs who had assumed human form in order to guide humans on a spiritual path. They are associated with the activity of the mind and can influence and inspire human actions. It is generally though that they are attracted to poets and artists and instills them with visions of spiritual beauty. Sylphs are ruled by a King being known as Paralda, and in form they appear to humans as in the classic image of the fairies.

Sylphs can be called to aid in all magick associated with the element Air as shown in the correspondences above.

Salamanders are the spiritual beings that inhabit and control the element Fire, and it is through their activities that fire exists. There are many family branches of salamanders each differing in size, appearance and dignity, and in folklore they were ruled over by a magnificent flaming king being called Djin. Salamanders are the strongest and most powerful of all the elementals having the ability to extend or diminish their size as needed. They and others of their kind are mischievous spirits, who like children don't fully understand the results of their actions, which can affect the thoughts and actions of people around them. As such, strong control is required when using their aid in ritual or magick.

Salamanders are thought to move about most freely at night and if you are ever lucky enough to see them, they would appear as small balls of light drifting across the air and water. Old-time sailors often saw them investigating the sails of their ships while sailing at sea, and the term “St. Elmo’s Fire” was coined to refer to such phenomenon. On land they are mostly perceived as small lizard-like flames about a foot or more in length.

When used in magick, Salamanders can have a profound effect upon human nature. Linked through the heat with which we maintain are bodily temperatures, they can influence our emotions and general temperament. When someone is called a hothead, or is referred to as hot-blooded, these are terms referring to their elemental nature.

Undines are the spiritual beings that inhabit the spirit realm of the element Water. They not only exist in the water itself, but also in substances of humidity and all other liquids. They appear to humans as beautiful water nymphs or the classic mermaids of myths and legends which tell of them being seen gracefully riding the waves of the ocean shimmering and shining with all the colors of the sea. They are also said to frequent marshlands, rocky pools, springs, streams and wells. They control the forces of nature in relation to plant and marine life as well as the tides and motions of water.

In some cultures undines inhabited waterfalls, while others live in rivers and lakes, every fountain had its nymph, and every ocean its oceanides (daughters of Oceanus the Titan ruler of the sea before Poseidon). In folklore the ruler of the undines is a being called Necksa whom they love, serve, and honor unceasingly. Undines are emotional beings, very friendly and open to being of service to humans, but care must be taken when working with undines for they can have a strong influence upon a person’s emotional well-being.

The smaller undines were often portrayed as tiny winged beings that people have mistakenly called fairies. Seen near flowers and plants that grow in watery areas, they had gossamer wings and shining clothing. Some undine’s closely resembled people in appearance and size, they lived in coral caves under the ocean or on the shores of lakes and banks of rivers. Undines work with the vital essences, the liquids of plants, animals, and human beings and are present in everything containing water.

Undines can be called to aid in all magick associated with the element Water as shown in the correspondences above.

Written and compiled by George Knowles.