Spirit Over Matter
A+ A A- 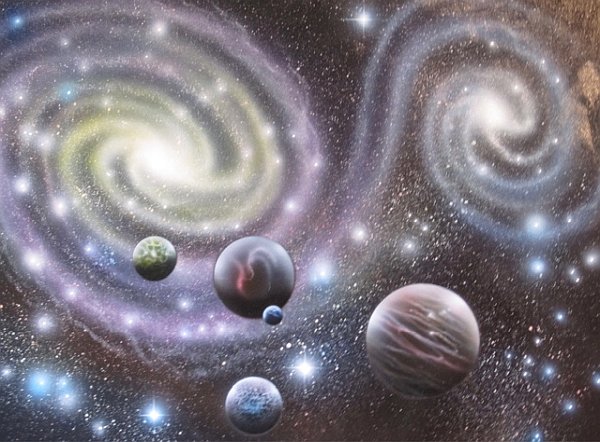 When we look at the big picture spiritually, the Universe, all of creation, everything we are and we see and experience, is actually made of one thing, one substance, and that is the Light of Source, the Light of the One, the energy of Oneness that streams forth into creation and densifies into various dimensions.

Creation is intended as a mirror of the Source, created by interaction between Source and its logical quantum opposite potential, that can be called contingency. Source is the deepest state of our being, it  is the state where everything and everyone is pure absolute Oneness in all regards, no time and space, no here and there, no then and now, no you and me, only One. Because of this, contingency or as it's also sometimes called, anomaly, is necessary as an opposite to pure Oneness, in order to create the Universe.

As the energy of the Source, of Oneness, streams into the Universe, creating it and giving it life, it densifies through dimensions/states of matter, thus becoming particles, which are actually waves popping out of the quantum field. The first particles created are tachyons: http://tachyonis.org

Many other particles are then created as spirit-matter densifies. All of the particles are actually carriers of various proportions of the spectrum of Light, which is the energy of Source densified and split up by the contingency. We are Light, we are sitting on Light, we are eating Light, etc.

Living here on this planet, there has often been the illusion that the physical world is the most real thing, while our decisions, imagination, visualizations, thoughts, emotions, feelings, etc, are less real, or even not factual at all. This is opposite to the truth. All of the non-physical experiences are actually real factual 'objects' which exist in higher states of matter, higher dimensions, in the plasma, etheric, astral, mental, budhic, atmic, monadic and adi planes. We may become conscious of them in our physical body but they exist in higher bodies. And spirit-matter particles are always flowing between planes. Because the physical is the densest plane of spirit-matter, it is the most split up by contingency, therefore we could say that it is actually the less real. The physical world could be more accurately considered to be the dream while the higher bodies are more real, not the opposite, and the Higher Self is the real self.

It is important to understand that building a momentum is very important to manifest anything in the physical world, because of its heavy density, especially on this planet. Absolutely everything in creation has to come from highest plane first, and flow down through all planes/states of matter one by one, in order to reach the physical. The lower planes have no power of their own, they only receive from the higher, and then may re-qualify what they receive. The more we turn to our Soul/Higher Self/IAm Presence, the more we establish a link, the more we build a momentum of energy streaming from it into the lower bodies. If we are not aligned in our behavior with the Higher Self's Divine Plan magnetized by Cosmic Love, it will not stream forth as much energy. The intention and attention and obedience to the Higher Self is the key.

If we have built a habit, a momentum of a certain paradigm for many years, it is not going to change instantly unless we build a momentum of energy which is according to the change desired. No creation is ever automatic, it is always consciously intended somehow by somebody at some point, and it only appears faster sometimes because a momentum has been built by disciplined work. There are no miracles, only application of natural principles. What appears as a miracle is only the application of a principle not yet understood. The main key principle here is that everything always comes from higher planes.

Therefore, physical circumstances are always reflection of the higher planes, of the energy, of the alignment with Higher Self. It doesn't matter what the circumstance is, what the technology is, what the paradigm is, it can always be changed by Light energy work. It may take persistence to build a momentum, which requires us to not destroy the momentum while it is building and nothing has appeared physically yet. Still, Light energy work can always change anything if we make it so, because higher planes/states of matter always have power over the ones below. Our Higher Self is the highest plane for us to tune into, so that's where our biggest attention should be, not at the lower, mental emotional physical etc.

This is why mass meditation works to change the world : http://bit.ly/2vzkzJh

And this is why we can turn our reality and this planet and all of Creation into an experience of pure Light and Love, anytime and anywhere we choose to.