Why People In These 5 Countries Live Longer 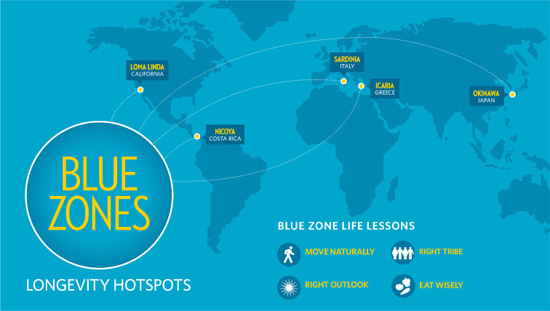 How negative ions contribute to a long, healthy life

Did you know that there are certain parts of the world where individuals have been found to live particularly long lives? These areas are called “blue zones,” and they may contain more than just people that practice active, healthy lifestyles.

“Have you heard of ‘Blue Zones’? They are regions of the world — five of them, to be exact — where people live abnormally long. First identified by Dan Buettner through his work with National Geographic, they include Okinawa, Japan; Sardinia, Italy; Loma Linda, California; Nicoya Peninsula, Costa Rica; and Ikaria, Greece.” [1]

There is no question that diet plays the biggest part in determining not only longevity, but also the quality of life, especially during the later years. A study has been published which clearly identifies the common dietary habits of some of the healthiest communities in the world. Five of those have been listed above and each one reflects a similar pattern of diet.

“Take specifically the people of Ikaria, Greece — Buettner’s personal favorite population. ‘When it comes to diet, they have three key things,’ he tells Yahoo Health. ‘Ninety percent of their calories come from plants, 65 percent of their diet is complex carbs, and the third thing — and this is a supplement everyone should run out and buy — is beans. A cup of beans a day for longevity.’” [1]

As stated, the key aspects of their diets revolve around plant-based calories, complex carbohydrates, and regular bean intake. Actually, many vegetarians living anywhere are often eating the same mix and amounts of similar type foods. What further distinguishes these 5 communities — “Blue Zones” — is that they are all located on the coastline.

Seashore living usually guarantees one element that folks living in the cities or near industrial areas lack. The ambient air found on the seashore is much more clean and fresh than inland air. The winds and gentle breezes which regularly visit the coastal communities ensure a constant revitalization of the ambient atmosphere. This constant turnover with negative ion-rich ocean air ensures that negative ions are always found in much greater concentrations along the seacoasts of the world.

Wherever the air is saturated with negative ions, the human body and mind feels better. The health-promoting negative ions have many beneficial aspects which positive ions do not.

“Your body’s cells naturally contain a negative charge. Meanwhile, irritating elements in the environment — dust, microbes, and pet dander, for example — tend to have a positive charge. “[2]

In other words, stale, polluted and particulate-filled air will always be less healthy in the long run because of the increase in positive ions.

People who live by the sea, particularly in the warmer climates, often have no need for air-conditioning or heated air. They are able to live with their windows open and frequently breathe truly fresh ocean air most of their lives. Contrast their status quo with the city dweller who is almost always living in either artificially heated or cooled air.

Then, when they navigate across the urban cityscapes, they do so in an automobile or a truck usually in long lines of traffic. Each time they stop their cars and pickups, they are sitting in the exhausts of so many other vehicles, including their own.

This quite common and ever-worsening scenario speaks to the fact that the great majority of residents on planet Earth are breathing substandard air. One of the most practical ways of addressing this situation is for folks who have any kind of an acute illness or chronic disease to spend as much time as possible at the beach or in the mountains, depending on exactly what ails them.

For the very same reasons, air in the mountains is also full of negative ions. Not only are the foothills and mountainous areas typically located far from the cities and other high-density areas, they are often covered with oxygen-producing trees and/or dense forests.

Being situated at higher elevations, the air turnover is naturally greater. Mountain streams and rivers serve to further this negative ion effect, especially where there are many or a confluence of two or three.

There is very good reason why vacationers like to go to either the beach or the mountains. They know that both venues provide a healthier environment with clean, fresh air. Not only do they feel much better on the beach or in the mountains, they can also get away with eating foods that would set them back at home.

It is a relatively unknown fact that when the human body spends most of the time in air that is super-saturated with negative ions, everything works better, especially the digestive process. Even injuries will typically repair faster by the shore, just as cuts and wounds heal up in the warm ocean saltwater.

However, it is the combination of a predominantly vegetarian diet together with fresh clean air that has set these seaside “Blue Zones” apart from their inland counterparts. Of course, the degree of stressful living is also a major component of the longevity equation, but that will be taken up in another article.