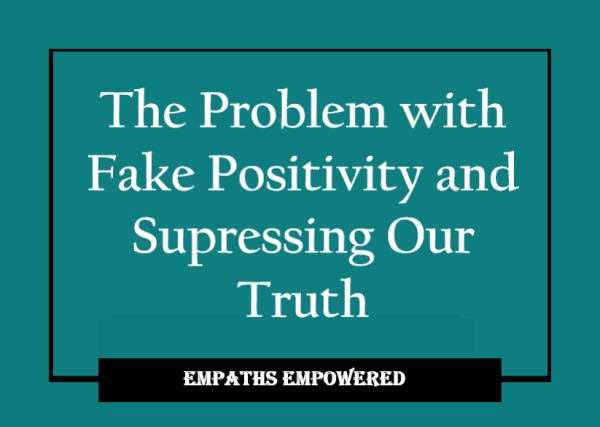 A few weeks ago, I received a very good comment from a fellow Empath, regarding my urging of readers to try to remain in a positive space. The reader rightly pointed out that when we suppress our feelings, by ‘pretending’ to be positive, it could cause more harm than good.

I am very grateful for the comment, because it not only got me pondering the importance of not suppressing true feelings of pain or frustration, but it also made me realize that I may not have fully explained the reason why I encourage Empaths to stay in a positive mental space within my posts.

The reason I put emphasis on staying in a positive mindset is because I know how much damage both fear and anger causes the physical and energetic bodies. I also know that, as Sensitives, if we allow our minds to be regularly engaged within pained emotions, we can get stuck in a very dark place, emotionally.

However, ‘acting’ positive, when we have a very valid reason for feeling upset or angry, could be classed as suppressing our truth, which ultimately keeps pain and grief trapped inside. This is something I do not recommend. I wrote about this subject in my article: ‘What is Really Making You Angry?’.

Unfortunately, in recent times, many of the emotions we are experiencing have been activated by such things as shifting energy, EMF and solar activity, political dramas, as well as ‘dark sources’ that are purposely keeping our minds engaged in turmoil.

Sadly, it is much easier for humans to go into a space of fear or anger than it is for us to stay in an optimistic mental space. As I’ve discussed many times, the mainstream media knows this and has been playing on it in order to distract and divide the population, keeping us not only in a weakened state but also making us easily controllable.

So, when I write about being positive, it is more about staying in alignment with our ‘true self’ and keeping the mind from getting wrapped up in the propaganda being intentionally stirred up by the ‘dark rulers’.

The Damage Caused by Suppressed Feelings

But getting back to suppressing our true feelings: As a species, we have often found it necessary to suppress ourselves and our truth. Especially when it comes to grief or true emotional pain. This type of suppression is incredibly destructive.

I know only too well the damage caused by burying emotional pain.

When I was 16 my dad died suddenly of a heart attack. At the time, I did not know how to deal with the anguish, so I buried it. Put on a fake smile and ignored the grief. Nearly a year to the day after my dad passed away, I started having panic attacks. Which were awful. I didn’t know it at the time, as they were happening, but it was because I had suppressed my grief. This containment had impacted my nervous system and eventually showed up as panic attacks.

Western Society doesn’t have a place for the grieving. Grief makes people uncomfortable. We don’t know how to handle it. After experiencing a loss of a loved one, most are ‘given’ a week or two to mourn. Then we are expected to come back to ‘normal.’

But the thing is, for most people, the mourning process takes a lot longer. In many cases, the grieving period lasts a year or more (depending on circumstances). If we do not allow for this, and suppress our sorrow, it comes back to haunt us. In my case it was as panic attacks.

Having experienced the effect of burying grief, I would never encourage anyone to deny genuine feelings of pain and this includes anger. However, nor would I recommend that we spend too much time festering on negative emotions, such as rage or hate, especially when we don’t know the trigger or origin, or when these emotions have been artificially stimulated,  by the powers that be, to keep the mind controlled. Do not take ownership of that which has been intentionally stirred up to trap your mind.

Sometimes, however, we need to be given reasons for erratic emotions, we may experience, that are triggered by powerful external sources. And what I mean by this is, certain phenomena of the natural world can massively Impact the human mind and body, especially of Empaths, altering our moods, thinking process, and more. At a ‘higher level,’ we are given ‘stories’ to explain these experiences. Or in other words, we are given circumstances or reasons that will explain excessive feelings of anger, frustration, etc. aroused by energetic shifts.  It should be of no surprise then, that what we have seen in the USA, which has affected the whole world, coincides with some major solar activity. See post here and here on Empaths and solar activity/energy shifts, and videos on space weather/solar activity here and here.

As I mentioned in a past post (The Purpose of your Frustration), much of the pain we have experienced, over the years, has served a purpose. The reasons for which have been revealed, for many, in recent times. But staying out of manufactured propaganda is so important now, as is bringing your mind back to its true positive state.

This time is not about being ‘fake positive.’ It’s about being at one with self, and finding your rightful optimism and joy within. Because, believe me, it is there. We just have to stay tuned into its frequency.