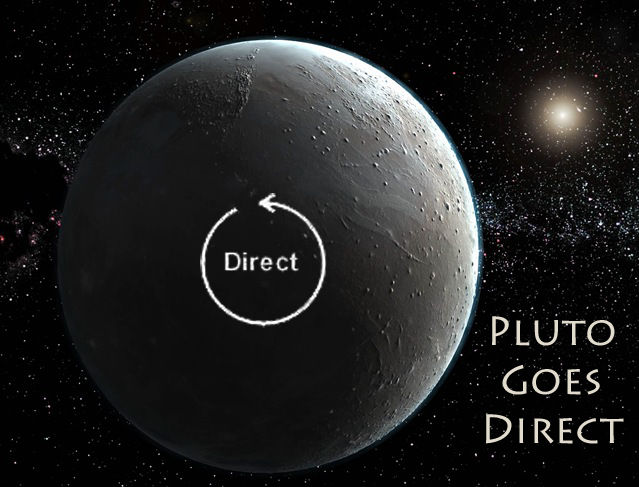 This is the last of three planets in the Capricorn Stellium of Saturn, Pluto and Jupiter to station direct, thus indicating the beginning of the final push towards freedom and peace.

Pluto also plays a significant role as part of two stelliums this year:

On January 12 we experienced the 500-year event – the exact conjunction between Pluto and Saturn at 22° Capricorn (joined by the Sun and Mercury!).

And now we are in the midst of another Stellium – a triple conjunction between Pluto, Saturn and Jupiter in Capricorn – an event that has not happened in 4,000 years!

So… Pluto is energetically completing the shift activated by January's Stellium, while in the midst of the NEW Stellium with Jupiter and Saturn!

It does not get more intense than this…

22° activates the Architect of Peace number.

22 reduces to 4, number of order and representing the 4 seasons and 4 directions.

Pluto has given rise to what has been “in the dark.”

Now with Pluto slowly moving forward again, we will begin to SEE is being uncovered.

For all the details on this pivot of Pluto into DIRECT motion and its impact on your life, watch the NEW Star Codes podcast.

In Love and Light,

Hilarion: Meditation and Journey of Forgiveness - Seventh Round

A Sharing About Prejudice

Harmonizing with the Heavens

Teachings of the Masters: Change