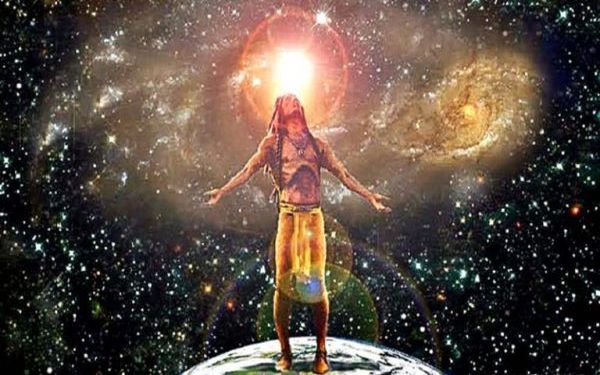 The Algonquians of the north recognize as the chief of their Manitos, Gitche (or Kitshi) Manito, the Great Spirit, whom they also call the Master of Life. It should not be inferred that a manlike personality is ascribed to the Great Spirit. He is invisible and immaterial; the author of life, but himself uncreated; he is the source of good to man and is invoked with reverence: but he is not a definite personality about whom myths are told; he is aloof from the world of sense; and he is perhaps best named, as some translators prefer, the Great Mystery of all things.

Yet the Great Spirit is not without proper names. Père Le Jeune wrote thus in 1633, concerning the Montagnais: "They say that there is a certain one whom they call Atahocan, who made all things. Talking one day of God, in a cabin, they asked me what this God was. I told them that it was he who could do everything, and who had made the Sky and Earth. They began to say to one another, `Atahocan, Atahocan, it is Atahocan."' Winslow, writing in 1622, mentions a similar spirit, Kiehtan, recognized by the Massachusetts Indians; and the early writers on the Virginia Indians tell of their belief "that there is one chiefe God that hath beene from all eternitie" who made the world and set the sun and moon and stars to be his ministers.

The Iroquoian tribes have no precise equivalent for the Algonquian Kitshi Manito, but they believed in a similar spirit, known by the name of Areskoui or Agreskoui, to whom they offered the first fruits of the chase and of victorious war. The terrible letter in which Père Isaac Jogues recounts his stay among the Iroquois, as a prisoner, tells of the sacrifice of a woman captive to this deity: "And as often as they applied the fire to that unhappy one with torches and burning brands, an old man cried in a loud voice: `Aireskoi, we sacrifice to thee this victim that thou mayst satisfy thyself with her flesh, and give us victory over our enemies.'"

The usual rite to the Great Spirit, however, is not of this horrible kind. From coast to coast the sacred Calumet is the Indian's altar, and its smoke is the proper offering to Heaven. "The Sceptres of our Kings are not so much respected," wrote Marquette, "for the Savages have such a Deference for this Pipe, that one may call it the God of Peace and War, and the Arbiter of Life and Death." "It was really a touching spectacle to see the calumet, the Indian emblem of peace, raised heavenward by the hand of a savage, presenting it to the Master of Life imploring his pity on all his children on earth and begging him to confirm the good resolutions which they had made." This is a comment of Father De Smet, who spent many years among many different tribes, and it is he who preserves for us the Delaware story of the gift of the Calumet to man: The peoples of the North had resolved upon a war of extermination against the Delaware, when, in the midst of their council, a dazzling white bird appeared among them and poised with outspread wings above the head of the only daughter of the head chief. The girl heard a voice speaking within her, which said: "Call all the warriors together; make known to them that the heart of the Great Spirit is sad, is covered with a dark and heavy cloud, because they seek to drink the blood of his first-born children, the Lenni-Lennapi, the eldest of all the tribes on earth. To appease the anger of the Master of Life, and to bring back happiness to his heart, all the warriors must wash their hands in the blood of a young fawn; then, loaded with presents, and the Hobowakan [calumet] in their hands, they must go all together and present themselves to their elder brothers; they must distribute their gifts, and smoke together the great calumet of peace and brotherhood, which is to make them one forever.

Thank you!
ॐ Namasté - Blessings!
"Life is an echo, what you send out comes back."
© 2008-2022 crystalwind.ca. All rights reserved.
Magpie Medicine
Wild Rose
Chief Arvol Looking Horse’s Message on Water
Get This App Now!